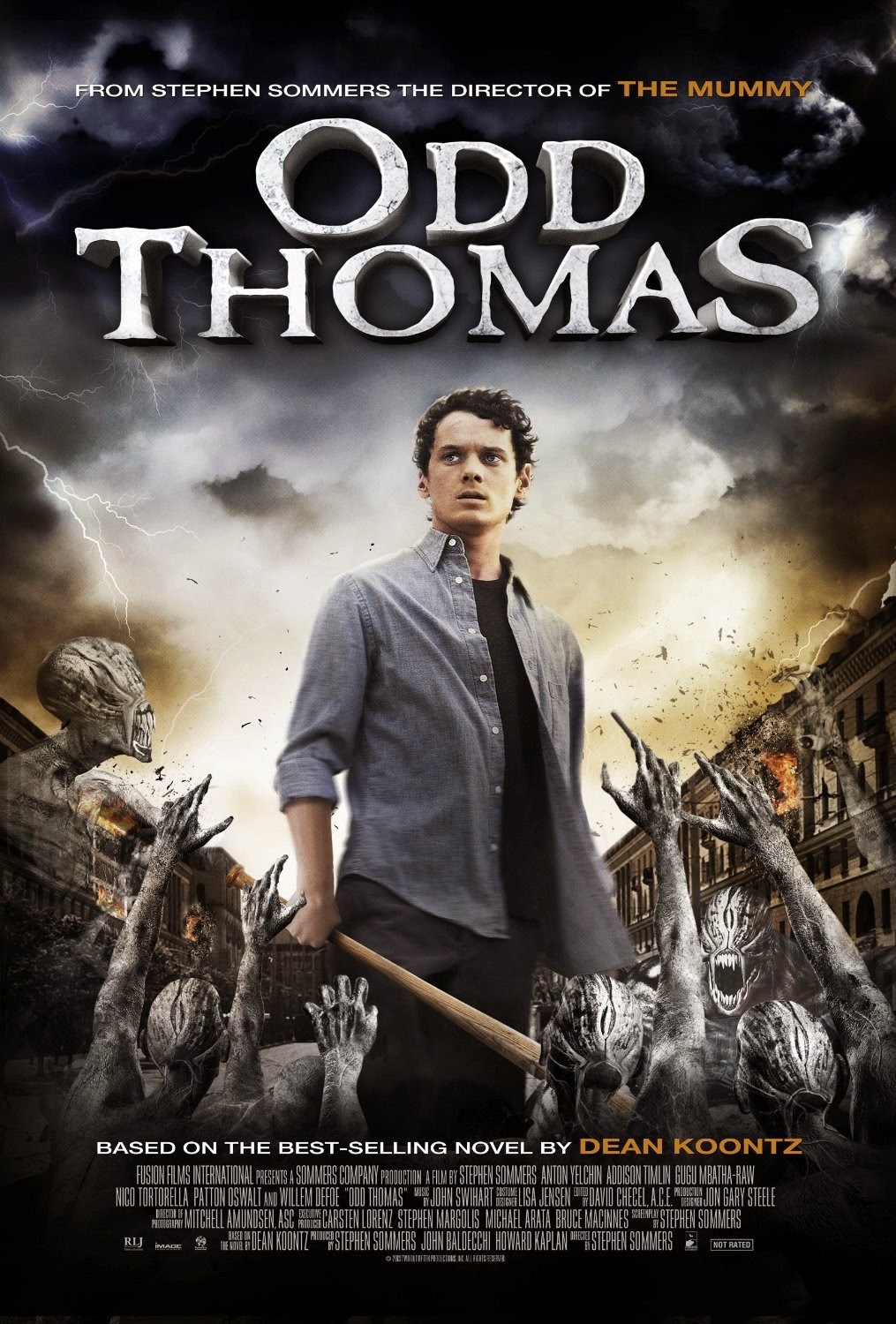 I'm sure I'm not alone in thinking that this oddly titled little film, which you've probably passed or seen repeatedly at your local video store or at the Redbox, was a paint-by-numbers low-budget direct-to-video affair. Well yes and no. "Yes" in the fact that it is a DTV release, "no", in the fact that it's anything but paint-by-numbers or low-budget. I think what will surprise almost everyone is the fact that while it's a film that sort of flew under pretty much everyone's radar, this little gem is just about the most entertaining horror/thriller/fantasy film to come out of the market in quite some time.

Odd Thomas (Anton Yelchin) is a small town fry cook who lives the simple life with his spunky girlfriend and who also just so happens to see dead people, everywhere. Having been born with this gift, he uses it for good in fighting evil and bringing murderers and whatnot to justice. Only a handful of people know his secret, his girlfriend and the town sheriff (Willem Dafoe), whom he helps regularly with cases. When a stranger shows up with an army of ghosts, Thomas sees it as a sign of something really bad about to happen in his usually quiet All-American town. Together with his girlfriend and trusting sheriff, he knows time is running out to figure out what that is and how to stop it.

Let's get some specifics out of the way. First of all, it's based on a book by Dean Koontz (whaaat?) And it's written and directed by Stephen Sommers (G.I. Joe, The Mummy, Van Helsing). It's eclectic little cast includes Anton Yelchin (Fright Night, Terminator: Salvation), Willem Dafoe, and a rather talented bunch of character actors to round things out. It's an effects heavy and often upbeat film about a young fella who has the ability to see dead people and chooses to help them cross over or to seek justice to those that were callously murdered before their time and catch the perpetrators.

Now that's out of the way, let's get down to brass taxes. So since it's a Stephen Sommers film, that means lots of CGI, for better or worse, because it's a Stephen Sommers film after all. I wonder if he'll ever be able to make a film without CGI ever again? Is it just part of his DNA? But it's also a film about ghosts, demons and spirits, and in this day and age, that's really the only way you're going to get that amount of heavy effects quickly. Now I'm not saying I support it, because I don't. Heavy CGI have their time and place. But Odd Thomas is a particular type of fantasy film that seems to warrant the use of it in this case. And thankfully we have someone like Sommers, someone who's built a career out of effects-heavy CGI films, who handles it really well.

Odd Thomas is a fun film. At times, thrilling, exciting, sad, funny and scary; and at it's heart (which it wears proudly on it's sleeve), it maintains a constant fun vibe that packs a punch of entertainment. I'll admit, even I was skeptical. I'd come across this numerous times, but never gave too much thought into it what with it's over-photoshopped cover and unusual title. But when you're trying to find a film to watch with a kid that's "kid-appropriate", your options are extremely limited these days and I'm glad to say, Odd Thomas saved the day. After the "Is this what Stephen Sommers has been relegated to?" shock wore off, I was pleasantly surprised and treated to a rather unique film that never takes itself too seriously, and when it does, seems to pull all of these different genre's together to create a unique viewing experience that will undoubtedly surprise even the most stoic or jaded moviegoer.

Odd Thomas, I think, will only grow in reputation as time passes. Even recently, I'd heard a few people on Facebook mention how much they liked it and that it was in fact, really good. So when it became available recently on Netflix to stream, I thought I'd jump on the chance and I'm so glad I did. It's kind of a funny story too. On a Sunday afternoon, 3 of us were browsing Netflix, Amazon and Hulu trying to find something we could all watch and enjoy. Having spent over an hour searching and we still hadn't decided on anything because we all just couldn't agree, in frustration I suggested at least starting Odd Thomas and giving it 20 minutes because I'd heard good things about it. If it sucked, we could move onto something else. The moment this film begins it's fast paced structure keeps things moving really quickly at break-neck speed and it really is just a helluva fun movie.

If you're looking for a "family friendly" film, but one that packs a wallop of entertainment in it's rather short hour and a half running time, and one that also isn't afraid to get a little dark from time to time, Odd Thomas will certainly fit the bill.
Posted by robotGEEK at 12:26 PM