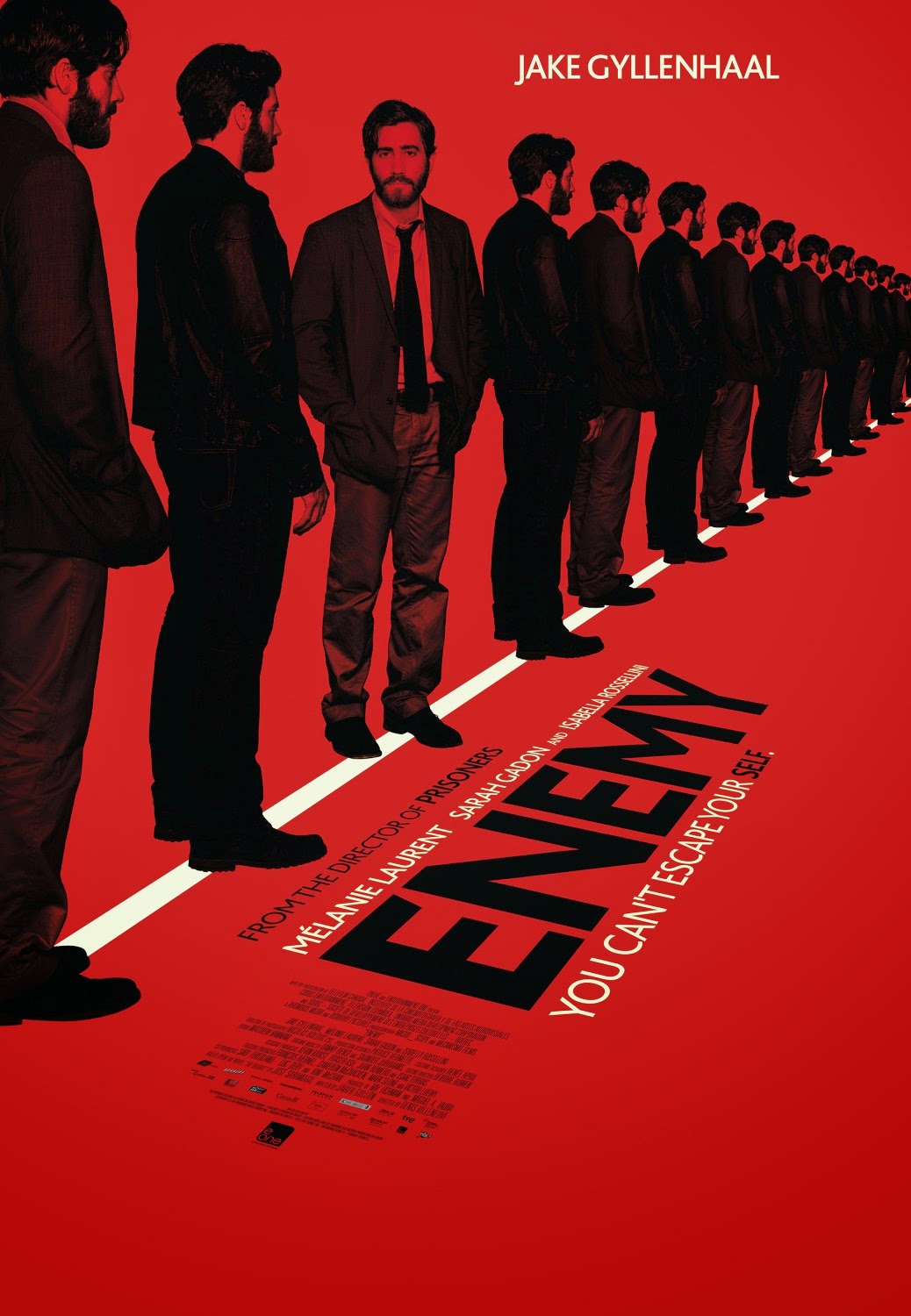 Watching Enemy is an exercise in patience. If you have a lot of it, you'll be able to sit through this and enjoy a fascinating, bleak and stark film by one of the most talented directors working today. If you do not possess even the smallest amount, you'll more than likely be either bored or frustrated to tears.

Canadian filmmaker Denis Villeneuve blew me away last year with his first U.S. film, the drama/thriller Prisoners, a film that seemed to come out of nowhere and proceed to knock the socks off of anyone who took the time to watch it. Seriously people, about as dark, brooding and gut-wrenching as a thriller could possibly be, but one made with so much style and substance that combined with Hugh Jackman's searing performance of a father desperate for answers and who will stop at nothing to get them, will punch you in the gut. That same year, director Denis Villeneuve and star Jake Gyllenhaal made another film together, the mind-bending and intimate film Enemy. These two films couldn't be anymore different from one another.

A professor (Jake Gyllenhaal) discovers, after watching a romantic comedy, that he has a doppelganger in the form of a bit actor. His attempt to track this lookalike down out of curiosity takes him to places psychologically that he never anticipated.

Enemy is a much smaller film in scale than Prisoners. Where Prisoners benefited from Jackman's Oscar-worthy performance and an exceptionally strong supporting stellar cast, Enemy mainly consists of just 4 actors with extremely limited dialogue. Most of what happens in Enemy takes place in long sequences with rarely a word spoken, where director Villeneuve prefers to tell the story through strong visual stimulation, body language and playing on the strengths of his main small cast. But the surprising thing is that while minimal in scale, it all works really well. So much so that because the film is so gorgeous to look at, and the fact that Gyllenhaal (playing dual roles) and the 3 women supporting him are such strong actors, it barely registers until it's over that when you think back on it, they barely spoke a word for an hour and a half. That right there is a true testament to the strength of this cast and it's immensely talented director.

What Enemy also differs from compared to their previous film Prisoners is scale. Prisoners is a big budget Hollywood thriller, complete with all the bells and whistles, while Enemy could almost be considered an "experimental" film in nature and execution. There are scenes and sequences in here that don't make sense, at least not immediately, and the film often makes small gestures that make you question everything. So as I stated before, you will need to have some patience, or at least an open mind to be able to sit through and enjoy this brooding, grim and surreal decent into the darkest part of two men's psyche.

My thoughts:
I rather enjoyed it to be honest. It was a completely different film that I was expecting and the surreal/experimental aspect of it all took me by surprise. I'm not against those types of films mind you, but when you're not expecting a film to be like that, it can throw you off enough to where you just don't enjoy it. Thankfully it's all anchored by a brilliant and almost mime-like type of performance by Jake Gyllenhaal and Villeneuve's strong visual strengths to keep you invested. I actually knew very little about it going in, never even having seen the trailer beforehand. So as the film plays out for the first 30 minutes or so I remember I kept wondering "what type of film is this supposed to be?" "When is anything going to happen?". Things do happen you impatient bastard, albeit rather slowly. You just have to give it time.

SLIGHT SPOILERS!!
I will warn you though, this is one of those "Open to your own interpretation" type of films, the kind that give no clear answer or definition to what anything means. And trust me, with this particular film, no 2 interpretations will be alike. Films like this can drive people crazy, especially those that need closure. And I'll admit, even I probably uttered "WTF?" after that last scene before the credits rolled up, but as I processed and let the film simmer for a while, I began to appreciate it more and more. I don't think I fully agree with how it ultimately ended with that last sequence, because I don't feel the film is smart enough to deserve an ending like. It's also hard to grasp what Villeneuve as a director was thinking when he included that scene because it plays with your head and will more than likely turn a lot of people off. Like, you think one thing and then Bam!, the entire film has just been turned upside down. Again, with no clear answer or logic.
END SPOILERS.

By all accounts, Enemy is a fascinating film by an extremely talented director and an equally talented cast. It's a slow-burn experience, yet completely engrossing if you can throw your preconceived notion's out the window. It's a visually stunning piece; stark and bleak - reminiscent of the work of David Fincher, complete with little details that most people will more than likely not notice and miss. But it's got substance, something a lot of other films these days sorely lack.

Take the trip, enjoy the ride, and be prepared to ask questions afterwards.

Posted by robotGEEK at 2:47 PM