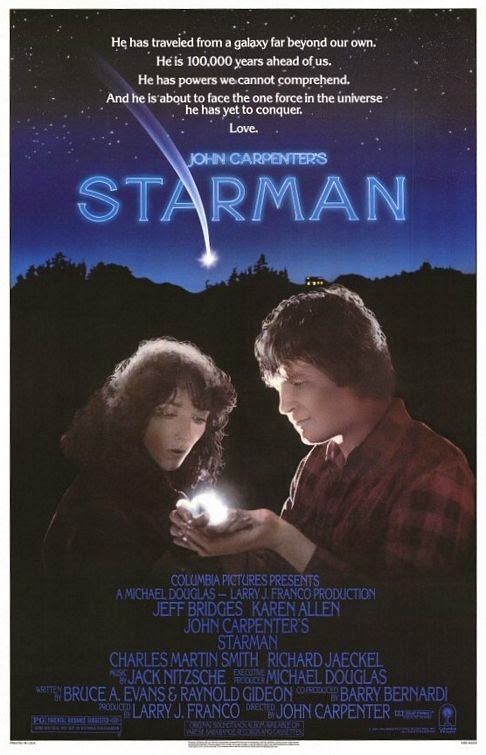 Starman is a fascinating film. Take a rather plain and simple script, give it to one of the most talented directors in his prime, and watch what he accomplishes with bare minimum resources to create extaordinary results.

As big a fan of director John Carpenter as I've always been, I never put much stock or thought into this dramatic effort sandwiched between the amazing but poorly received Christine and the equally amazing and dramatically more dismissed cult classic Big Trouble in Little China. Starman is a big departure for Carpenter as a filmmaker. Known mostly for horror and sci-fi, this ended up being a minor blurb in his vast filmography of iconic films and one that most people don't really discuss for one reason or another. More than anything, it's probably because Starman would be considered a dramatic love story, with only slight touches of sci-fi. I myself am guilty of that. Even back when I was a teenager devouring Carpenter's films like crazy, I think I only saw this one maybe once or twice as a young filmgeek. Though still a Carpenter film through and through, it never grabbed me the way his other films did........or so I thought.

This past year or so I've been revisiting all of his films, even the ones I didn't necessarily care for the first time around, like Memoirs of an Invisible Man; which I love by the way, and Body Bags; which I didn't. Starman, to my surprise, became available recently for streaming on Netflix, and so one Monday afternoon when I was off and took a break from chores, I sat down to revisit this during my lunch and systematically had my mind blown. How in the fucking hell had I never given this film another shot in all these years? Why does it not have the reputation it so richly deserves? How is it not ever mentioned on Carpenter's "Best" list? As the end credits rolled up, and I was left humming that impossibly beautiful and catchy theme song in my head, these are the questions I kept asking myself because ladies and gentlemen, Starman represents probably the best of what Carpenter has to offer as a visual filmmaker. Sure it was a job-for-hire kinda gig since his two previous films flopped and he wanted to keep working in Hollywood, but holy shit is this an "almost" masterpiece of dramatic/science fiction filmmaking. Let me put it this way, since this initial viewing a few months back, I've probably re-watched it at least a good half dozen times. 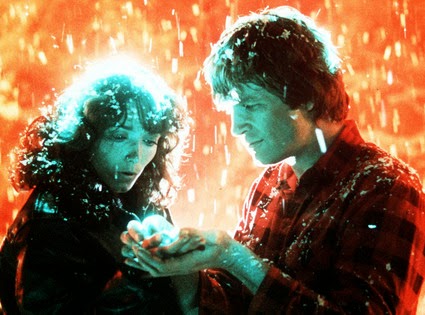 From a technical standpoint alone, Starman is brilliant; visually one of the most stunning and original films I've ever seen in this particular genre. Carpenter shoots each frame with such precision that you just can't help but be in awe of his talent as a visual filmmaker. Add into the equation his ability to edit it all together rather effectively so as to never really have a dull moment and you've got a recipe for awesome. This film is oozing with so much style that it's easy to overlook the lack of substance. But here's the thing, while the film isn't terribly original; an alien (Jeff Bridges) crash lands on Earth, taking the form of Jenny's (Karen Allen) deceased husband and kidnaps her so she can take him to his rendezvous so he can be picked up by another ship and return to where he came from, it's thoroughly engrossing driven by some very strong performances by it's three leads, Jeff Bridges, Karen Allen and Charles Martin Smith. And Jack Nitzsche's insanely catchy score will stay in your head for days.

One of the things this film has going for it is it's time period; the early 1980's. Had this been made now, it could very well have ended up being rather dull. But because this was made in the beginning of such an iconic decade, it adds that special flavor that easily could have made this forgetful had it been made 10 or 20 years later and in the hands of a bland director. Everything from the clothing, decor, cars, electronics and even it's limited special and practical effects work puts a time stamp on it that gives this film a good chunk of it's visual charm.

Speaking of it's time stamp, this film was actually made years earlier - the same time as E.T. specifically, but since that film was reigning supreme at the box office, the studio felt they needed to hold off on releasing it for a few years until the E.T. craze died down a bit. Last thing the producers wanted was to have another "stranded alien on Earth" film competing with one of the biggest box office hits of all time which just so happened to have a similar storyline.

As great as this film is, it's an incredibly sad reality that this particular film has never received a proper DVD or Blu-ray release here in the U.S.. It's been part of several combo packages throughout the years, but Sony's 1998 DVD release is a joke. It comes in both full frame and widescreen (thankfully), but no supplemental material. All these years later, still not better release or even a Blu-ray. So if you're looking to purchase this amazing film, there's no real great release to get excited about. I would suggest streaming it, which you can do currently on Netflix Instant or you can purchase it digitally in HD on Amazon.

Starman is without a doubt a film that needs to be seen again. If you haven't done so in a long while or if you've just never given it a chance, do yourself a favor and get on that pronto. I think you'll be pleasantly surprised at how great it is. It's a prime example of the power of John Carpenter's storytelling and visual talent. In my heart of hearts, I honestly feel Starman is impossible not to love.
Posted by robotGEEK at 10:30 AM