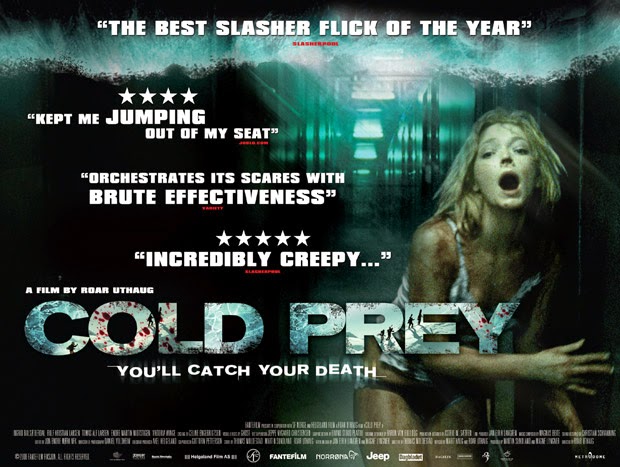 I first came upon learning about Cold Prey and it's sequels on a "Best Norwegian Horror Films You've Never Seen" type of list recently and I must say, it was a rather impressive list. Some I'd heard about already, but most of them I have not, including the Cold Prey franchise, of which there are 3 of them. Described by the author of the list as pretty stellar and a much better horror film than you're expecting, it's safe to say that I went into this with rather high expectations, especially since it seems that horror films that come out of Norway are in fact pretty damn good.

Slight Spoilers Ahead:
I'm not gonna lie, Cold Prey, while a solid thriller, just didn't impress me the way I was hoping it would. And let me repeat that, it's a "thriller", not a "horror" film, a fact that was kind of shocking when it was all said and done. You see, they market this as a straight up horror film, with the trailers even implying that there's a "monster" or "supernatural" aspect to it. I'm not going to ruin it by saying whether it is or isn't, but the fact of the matter is that the trailers slightly mislead you, and while it could very well be considered a great Norwegian horror film by many in the horror community (there are 2 sequels after all), I personally just didn't think it was all that clever, original or entertaining. In fact, more often than not, I found it quite dull.

On the positive side though, it's got a nice clean stylish look to it, and the ensemble cast is pretty solid overall. At it's best moments, it carries the "slasher" aspect pretty well, an angle I wish they stuck more with and dedicated more energy into, rather than making it more like a suspense/thriller whodunit. Even then, the big reveal at the end isn't as exciting as it should have been, nor really all that surprising if you really take the time to think about it and try to figure it out.

I watched this with a group of people, and the consensus was that as a horror film, it was just alright, nothing we'd highly recommend to friends in an increasingly flooded market with other more enjoyable horror films worth checking out.
Posted by robotGEEK at 10:26 AM