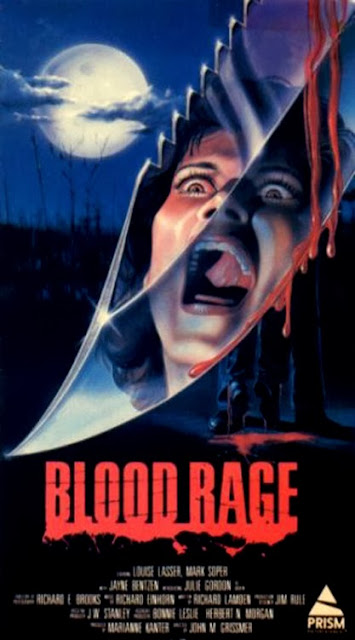 Blood Rage aka Nightmare at Shadow Woods is a film I'd never heard of. On a recent visit to Austin, TX on Thanksgiving week, I decided to check out one of my favorite old haunts, The Alamo Drafthouse. If you don't know anything about the Drafthouse, well let me tell you. It's just about the best damn theater you can go to. Well, the original ones anyway.

It all started in Austin, Texas (it's since been sold into a nationwide franchise) and while they do show current releases, they're better known for showing cult, obscure and just plain badass films in 35 mm. And the best part? You sit at your seat, and waiters come right to you and take your order for food and alcohol. You never have to leave your seat. So yea, you get to eat awesome food, drink damn fine alcohol and watch a badass film; awesome. Most days of the week have a theme like "Weird Wednesdays" where you get to see a strange film for free at midnight, or "Hong Kong Sundays" and so on. Well, that's what they used to do when I lived there years ago. Not positive if that's still the case. However, since this was Thanksgiving, they obviously needed to show a Thanksgiving themed horror film. Duh! One Halloween about 15 years ago I saw an original 35 mm print of Tobe Hoopers The Texas Chainsaw Massacre with Hooper himself live in attendance for a Q & A. That's the cool kind of shit they do. And you get to watch these films with other filmgeeks and it always makes for a better experience.

But anyway, back to the film. I looked in the guide and saw there was a one night showing of a film called Blood Rage for 10:30 PM. No information was available. But I figured it's The Drafthouse, it's gotta be good in some way.

Our host for the evening tells us before the film starts that while there are plenty of Christmas themed horror films, there are less than a handful of Thanksgiving themed horror films. Actually, he said there are only two; Blood Rage and another forgotten 80's slasher from 1981 called Home Sweet Home starring Jake Steinfeld; you know, the Body by Jake guy. Now I don't know if that's accurate or not, but when I try and wrack my brain to try and remember any other Thanksgiving themed horror slashers, absolutely none come to mind, so he may very well be right. Our host also boldly stated that between the two, Blood Rage was the best. Even giving a few tidbits at what's in store, to sort of wet our appetite.

So basically what we have is a severely dated and often times unintentionally hilarious slasher film. A "So Bad it's Good" horror film if you will, the kind that happens to be one of my favorite types.

Made in 1983, but not released until 1987, Blood Rage aka Nightmare at Shadow Woods is pretty standard fare in terms of horror slashers. What's funny is that they don't even try to add a little mystery to who's doing the killing. They tell you pretty much right in the beginning and when the shit goes down later, it's all told to you front and center. Not a very clever way to have things play out, but that's what adds to a lot of the laughs because it's supposed to be serious and scary, but because of some bad acting, questionable camera work, completely nonsensical actions of the characters and leaving nothing to the imagination, Blood Rage is hilarious when viewed with the right company.

Todd and Terry are a couple of all American 10 year old twin boys. One day, for absolutely no apparent reason, Terry kills a random guy at a drive-in, laying the blame on his twin Todd, who's whisked away to a mental health facility for the next 20 years. Flash forward 20 years later on Thanksgiving day, and the news that Todd (the innocent one) has broken out of the facility over Thanksgiving dinner has everyone on edge. Murders of course start taking place and well, that's the film.

The entire film takes place in an apartment complex that looks like it came right out of Three's Company. No joke. But that's what adds to so much of the charm. This film is so insanely dated that it's a blast to watch how these idiots dress, or wear their hair, and most of all, how these women used to wear makeup. And these characters do the most ridiculous and head-scratching things that it's just funny, plain and simple. You find yourself either laughing or screaming at the screen at how stupid they all are, which is of course where a lot of the fun comes in. This was a great film to watch with a crowd. And I think that's important. I think that if you try to watch this by yourself for example, and without knowing anything about it, then you might come out of it severely disappointed. But if you watch it knowing full well it's a terrible horror film, and you include some friends and alcohol, then it will be a fun experience.

After seeing this, I did a little digging and discovered that the version we saw was severely cut of most of the gore. Boooo! Of course there was violence and killings, but it never went outlandish, until I did a YouTube search where you can see all these deaths in all their unedited glory. So that was a bit of a bummer, but what are you gonna do? On the plus side though, Blood Rage has a killer synth score by Richard Einhorn. He also did Shock Waves and The Prowler. In fact, the score was so amazing it's actually too good for this movie; no lie. You'll notice immediately when the film starts rolling, it's one of this films best attributes and thankfully, does not let up the entire time. Regarding the cast, you more than likely won't recognize anybody in this, except for the small cameo of Ted Raimi. Yes, Sam Raimi's brother has a small but memorable role in this.

On the technical side, again, it's got an amazing synch score and a, should I say "interesting", ensemble cast. It's director, John Grissmer, has only ever directed 2 films. This and another a whole 10 years before called False Face, of which I know nothing about. Let me just say that you can certainly tell he's only ever directed one other film before this. That's all I'm gonna say. The script is about as flawed and ridiculous as can be, but that's to be expected. The plot holes in this are so huge that......aw never mind. Clearly riding the wave of the Friday the 13th slasher genre, they apparently thought they could just put a bunch of people together and show them getting killed off one by one. Who cares if it doesn't make any sense?

How to see it:
Unfortunately, it's a really hard film to own in the U.S., even on VHS. You'll be lucky if you come across one for under $50. And so far, there has been no DVD release to date. You can, however, watch it in full on YouTube uncut, which is of course the way to see it. So gather some buddies, grab a cold beer and enjoy the hot mess that is ............... Blood Rage.
Posted by robotGEEK at 9:46 AM