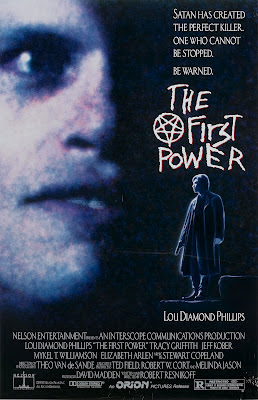 Man, I hadn't seen this one in forever. I vaguely remember it. I remember some cool scenes, Jeff Kober being creepy and one of the few films Lou Diamond Phillips starred in that actually hit the theaters. It's also a surprisingly difficult film to get cheaply in the states for some reason. I don't know why. It's not great or anything, and the DVD itself is as bare bones as it could possibly be. Maybe there was a limited run? I don't know. But anyway, I finally saw it and I have to say I enjoyed it. It's utterly preposterous, silly and for the most part, logic is completely thrown out the window, but it does also have a few things going for it. Like the stunts for one. There is some pretty amazing stuntwork going on in here and though they were ridiculous, I think they had a big part in why I ended up liking this so much. You know, it's your standard late 80's early 90's supernatural thriller/detective story about a cop chasing a serial killer, only they throw in some insane stuntwork out of nowhere that serves no real purpose in moving the story along, but looks great on screen. Sometimes, depending on your taste or mood, it can be enough. In this case, for me it was.

Detective Russell Logan (Phillips) is an LA cop who has a reputation for putting serial killers away. His latest suspect, Patrick Channing (Jeff Kober), is a serial killer with a satanic edge, sacrificing his victims in a demonic and ritualistic fashion. When he's caught by Logan, he's immediately tried, convicted and sent to the gas chamber. Only this is exactly what Channing wanted all along and in the process, his evil spirit is freed and he's able to move from body to body continuing his murderous rampage until Logan can find a way to stop him again, this time for good.


I really liked seeing Phillips in a leading role like this. I've always liked the guy and though he's played plenty of cops, playing a standard cop in a serial killer flick was a guilty pleasure. Same goes for the always reliably creepy Jeff Kober. I know he doesn't always play villains, but when he does it just seems so natural. I'll just always remember him creeping me the fuck out in this and Out of Bounds when I was a teenager. Seeing Mykelti Williamson in this as Logan's partner was a surprise. I didn't remember him being in this and only became aware of him after Forrest Gump came out. Strangely though, they misspell his name in the credits as Mykel T. Williamson. Weird. But he was fun to watch as the more lighthearted of the two and the one more willing to crack a joke in an awkward situation. I think the only one I had an issue with was Rachel Griffiths, who plays a psychic who helps Logan in tracking Channing down and who seems to be the only one who knows how to put a stop to him once and for all. I just didn't find her very good or convincing and I was constantly annoyed whenever she was on screen. 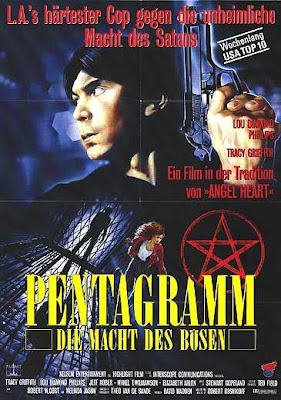 I have to give props to writer/director Robert Resnikoff for creating such silly and ridiculous situations and a tired premise and making it all look good, because he does and pulls it off wonderfully. I was surprised to read that he's only ever directed two films in his career, this and some film a few years before called The Jogger. I'm not saying it's groundbreaking or anything, but it's competent for a guy who's only ever made 2 films and he keeps the gritty film noir style in check. I should also mention that he also wrote the Jay Leno/Pat Morita crapfest Collision Course. I'm gonna leave that one alone though. But I'll say I was impressed with the overall look, tone and grittiness of this one and thought he handled the stuntwork especially well. It wasn't as bloody as I would have imagined, but the detective noir feel certainly makes up for it. Plus, though silly, some sequences just looked plain cool. Like where Logan and the psychic are running from Channing in a rundown hotel and left weaponless, Channing rips a hanging ceiling fan out from the ceiling and uses it as a weapon as the blades miraculously keep spinning even though he's ripped the chords out of it. Of course Logan shoots at it and of course, it deflects all of the bullets because it moves that fast and it's that strong. But that's the kind of stuff I'm talking about. It's completely unbelievable, maybe even stupid for some people, and this film is full of scenes like that, which gives it that unexpected vibe. Like, shockingly, whenever Channing possesses someone and takes over there body, they also miraculously know martial arts. You just gotta go with it. I might be in the minority with this one, but I enjoyed it.

Posted by robotGEEK at 9:02 PM