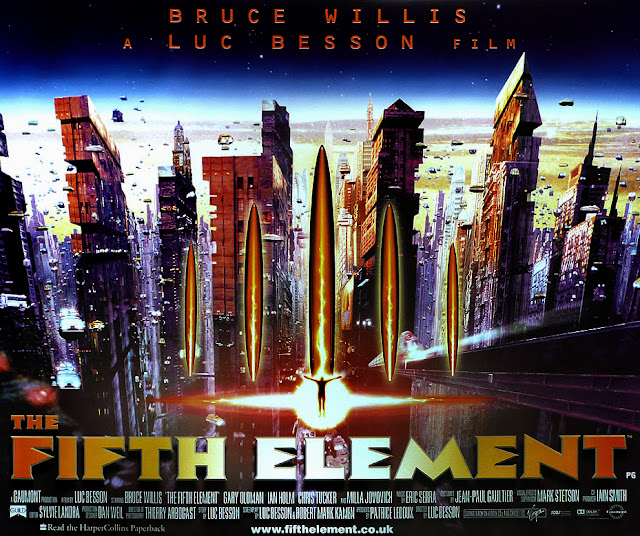 This was one of my favorite films when it first came out. Being a huge fan of director Luc Besson, I was mesmerized by the Frenchman's take on the sci-fi genre. Incredible visuals, lush and daring design, Bruce Willis just being a badass and a frenetic pace teeter tottering between comedy and sci-fi action made this one stand out from the rest. It was just fun, no qualms about it. But revisiting this one recently, I was surprised at how much more comedy there was actually in here than I remember and how for me, a lot of it just doesn't work. It has a few standout funny scenes, but it starts to get pretty old after a while with the constant fainting, or the annoying apprentice to Ian Holm's character of Father Vito Cornelius who's just so annoyingly jumpy and weak.

But The Fifth Element is also just plain awesome in so many other respects. The casting of Tiny Liston Jr. as the president for one. Is that just not genius casting?! And the always badassness of Bruce Willis. But there's also a very unique and even brave design aesthetic going on here with everything from the costumes and sets, to the design of the creatures, ships and the decision to use old school puppetry for the Mangalores heads, bounty hunters for Gary Oldman's character Zorg. Speaking of Oldman, he definitely adds a nice healthy dose of flavor to the table with his rendition of Jean-Baptiste Emanuel Zorg, but I still don't get why he had a southern accent. I mean, of all accents, why a southern one?

As much as I love this film and the unique direction it takes by implementing a lot of comedy into the mix, I can't help but think how much better it would have been had it been a straight up hard edged sci-fi spectacle. All the necessary ingredients are here and accounted for, but it always feels like it takes such a huge detour when something silly or funny happens, often becoming unfunny. Don't get me wrong, some of the comedy bits work here and there, but I think it's too much at times and I found myself rolling my eyes more often than not. But hey, that's just me. It still works remarkably well with enough action to satisfy any action fan and some amazing costume and set design. Still not sure if I agree with Milla Jovovich being a "perfect" being though. I mean, she's hot of course, but I could easily imagine a lot of other hot actresses at the time that would have looked a lot better in that costume. I'm just sayin'.

One thing is for sure, The Fifth Element is a lot of fun, no matter what issues you may have with certain aspects of it. Writer/Director Luc Besson, who had just completely floored me with The Professional 3 years earlier again delivers some outstanding visuals, just in a different context. Whereas with films like La Femme Nikita and The Professional, the colors and tones were dark and gritty, everything here is bright, colorful and shiny. Though I'm not one for agreeing with the need for sequels often, I think I would have loved to have seen this world expanded some more with a sequel. Maybe not so much with the actual Fifth Element's character, but rather Bruce Willis's Korben Dallas character. I think it would have been a lot of fun to see what other adventures Besson and frequent screenplay collaborator Robert Mark Kamen could have come up with for the character of Korben Dallas. Basically he's John McClane, only.............you know, in space.
Posted by robotGEEK at 4:21 PM