Review: Superman vs. The Elite 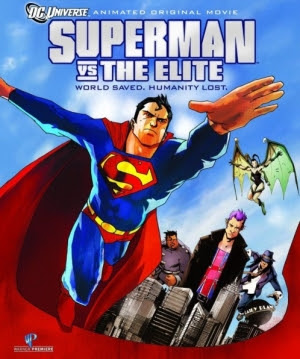 Like any comic book geek or animation fan, I watch these DC and Marvel DTV flicks when they come out. Some are not so special, but then some are just plain badass when done right. Batman: Year One is probably one of the best and most recent ones that come to mind, but a lot of the Superman ones are really good too, and this one is no exception. I'm usually up to date on these releases or at least aware of them through various media outlets I regularly peruse on a daily basis, but for some reason I'd never heard of this one until it came out. And the title kind of threw me off too because it has a "kid" vibe to it, or is that just me? In any case, don't let the title throw you, this is badass and certainly one of the better DC Universe titles released in some time.

The first thing you'll notice immediately, if the opening credits didn't scare you away, is that there's a definite change in art style compared to the other Superman animated flicks. It actually takes about 10 minutes to get used to, but once you do you can't help but feel that it works, because it does. And be warned, the opening of this thing really, really throws you off and me and my buddy were both looking at each other with a "Uh oh" look. But it's all to throw you off. Immediately with the credits, it has a kid TV show retro kinda intro, which was cool but not what I was expecting. Then when the credits are done you're given a "WTF?" moment because you see Superman doing his thing, but drawn with a juvenile style and right when you're about to think "What the hell is this?", you realize it's a cartoon being shown on a television that's being seen by Clark Kent and Lois, a kind of parody of Superman for the kids, and then it's back to normal and good.

A new band of superheroes known as The Elite, each with there own unique super power, seem to come out of nowhere. Young, hip and with a slight dark edginess to them, the media, the public and even Superman himself take to these teenage super heroes immediately until it becomes very clear that they do not hold the same ideals and value for life that Superman does and soon it becomes Superman vs. The Elite in a no holds barred for dominance on planet Earth.

This was really, really good, especially considering I knew nothing about it going in. The slightly different animation style really works for this particular story and the story ended up being a lot darker, and much more violent, going places I wasn't expecting it to go to. I should also note that Tim Daly didn't return as the voice of Superman this time around. Here he's replaced by veteran TV and film character actor George Newbern who is a dead ringer for Daly. I actually had no idea until it was over that it was somebody else other than Daly doing the voice because you just can't tell. I've always felt Daly was perfect for the voice of Clark Kent / Superman, but after this, I'll be just as happy with Newbern in the role. Like Daly, he exudes bravura and confidence befitting Superman.

Even though the film is entertaining throughout, with a healthy dose of action and battles right from the beginning, it's really the second half that really delivers. I was pleasantly surprised at how dark and violent it got with the last act, which is always a good thing. Keep it fresh and you'll keep the fans interested. And I have to give it to DC, though I am and will always be a Marvel guy, when it comes to the DTV animated films, there's just no competing against DC Universe. Oh, and to just add to the overall badass experience of renting or buying this, there's a 13 minute feature on the making of the new animated film currently being worked on based on Frank Miller's legendary and genre defining graphic novel The Dark Knight Returns, with Peter "Robocop" Weller voicing Batman. I get chills just thinking about that. I'd say this is definitely worth a viewing if you should ever get the chance.
Posted by robotGEEK at 11:49 AM