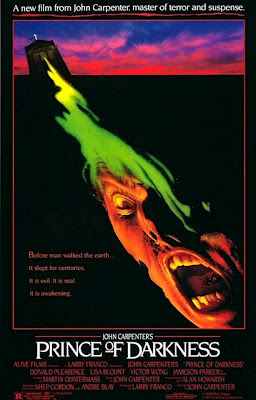 
I've always hated this cover art for John Carpenter's Prince of Darkness. It all looks very cheap 80's direct-to-video and I don't even think that person on the cover is even in the film because he doesn't resemble anyone in it. And I think that's why I never gave this one much thought up until now. It just didn't look like anything I'd enjoy and just going by the cover alone, it looked cheap. Boy was I wrong!


Prince of Darkness is a very rare thing in deed, old school filmmaking at it's finest by one of the men who helped define the genre himself. A film with a miniscule budget, but with the talent of someone like Mr. Carpenter being the camera, you'd never know it. Like a lot of his better known films from this era, it's just visually stunning, yet simplistic. It's a slow burn kind of film, but with a huge payoff when it's all over. And even in it's slower sections, Carpenter keeps the tension and suspense at a near constant beat. For me, out of all his films, this one closely resembles The Fog and The Ward in overall tone, a kind of film I wish he had made more of.

Before man walked the Earth..........it slept for centuries. It is evil. It is real. It is awakening.


Synopsis via Derek O'Cain:
A sinister secret has been kept in the basement of an abandoned Los Angeles church for many years. With the death of a priest belonging to a mysterious sect, another priest opens the door to the basement and discovers a vat containing a green liquid. The priest contacts a group of physics graduate students to investigate it. Unfortunately, they discover that the liquid contains the essence of Satan himself, and they also discover that he will release HIS father - an all-powerful Anti-God! The liquid later comes to life itself, turning some of the students into zombies as the Devil comes forward to release his father. Will these students be able to stop him?


I could have tried to come up with my own synopsis, but this one pretty much nails it completely. So kudos to Derek O'Cain for hitting it on the mark.
This was truly a really great little film and so much better than what I was expecting it to be. I just couldn't shake this constant feeling of "They just don't make them like this anymore" from the opening credits to the last frame, all accompanied by John Carpenter's signature brooding and thoroughly effective score. John Carpenter made this right smack in the middle of Big Trouble in Little China and They Live. Two of my favorite Carpenter films that did not meet critical or box office expectations at the time, but are considered certified Cult Classics today. One of the things I love about this one is that it stars two Big Trouble in Little China alumni's Victor Wong and Dennis Dun, two really great actors I thought should have had bigger careers than they did. Donald Pleasence also stars as the priest who invites the physics students and there teacher to the church to study the mysterious container full of the green ooze, which in turn get's the ball rolling when the ooze starts taking over the students and turning them into zombies one by one. I have to say, this has a pretty large cast for such a small film, yet Carpenter is able to give each character ample screen time and with plenty to do. You never wonder "Hey, what ever happened to that guy?". For me, one of the biggest casting surprises was of the lead, which happens to me Jameson Parker. I only ever remember him from tv's Simon & Simon, which he was still on while making this film, and just remember thinking how strange it was to see him starring in this little horror film. But he does a great job and kudos to him for trying something different. Though Donald Pleasence gets top billing, and Jameson Parker seems to be the lead, the one I think responsible for carrying the film squarely on his shoulders has to be Victor Wong, who plays the physics professor and who you will remember as Egg Chen from BTiLC. He's just awesome in this and too bad other directors didn't take Carpenter's lead and cast him in more prominent roles.


As simple as the movie is made, you've got lots and lots of the classic John Carpenter flourishes throughout that make all of his best films what they are. Some pretty damn good effects, the classic simplistic John Carpenter score, beautiful widescreen cinematography and just enough tension and suspense to keep you on your toes and never bored. I really loved how the second half really delivered on the goods with this one too, with just the right amount of "everything". So much so that I really didn't want it to be over. If you should ever get the opportunity to check this one out, I strongly recommend you do so. I'm shocked I never really tried before until now, and it's the perfect example of "Don't judge a book by it's cover".
Posted by robotGEEK at 8:02 PM