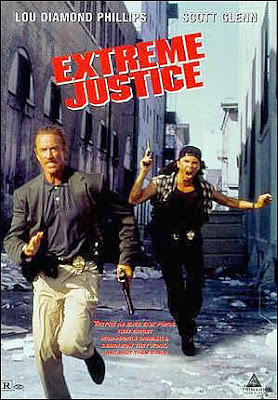 Mark L. Lester has always been a hit or miss director. He can deliver some really solid action entertainment with films like Commando, Class of 1999 and Showdown in Little Tokyo, but then he can also make films like ........well pretty much every film he's directed from 1996 until today. It's a shame really, because when he's working on all cylinders, he can certainly deliver the goods. He reminds me a lot of director Russell Mulcahey, whose film Ricochet I just recently reviewed and which I loved to death. When Mulcahey hits, he hits hard, but when he misses, we get films like Highlander 2: The Quickening.

Extreme Justice, thankfully, falls into the badass category for the most part. Released in 1993, 2 years after the awesome Showdown in Little Tokyo, he shows he can still direct an action film when given the right tools, no matter how small the budget. And that's something you'll notice immediately with Extreme Justice. It looks and feels like a direct-to-video film shot on a tiny budget and years before his biggest hits. Only this was made "after" the height of his directing career. It's a good solid action thriller though, just utterly ridiculous most of the time. I mean, the entire concept and the things these guys do and are able to get away just defy all logic. Yet, it's based on a real outfit called the S.I.S. (Special Investigation Section). Wholey exaggerated of course for effect, but still incredible.

Dan Vaughn (Scott Glenn) leads a highly secretive investigative force of the LAPD called the S.I.S., whose job is to hunt down the most dangerous criminals and take them down by any means necessary without protocol and without fear of being prosecuted. In most cases, they watch the criminals actually do the crime they are being investigated for and let them finish before taking them down, all so that they an say they didn't act prematurely and had enough evidence to pin on them, no matter how horrible the crime. When one of there men is killed on the job, they recruit young hotshot and former protege to Vaughn by the name of Jeff Powers (Lou Diamond Phillips). Known for a hot temper and taking extreme measure, they also note that he gets the job done and that's what the S.I.S. find appealing. Soon, Powers discovers that his new partners are not playing by the rules and in most cases, crossing an ethical line that Powers just can't comprehend and before long, it's him against his unit. Who will come out on top?


I have to say, despite it's small budget and DTV feel, I really enjoyed this one. Scott Glenn is always fun to watch, and watching him play a character with a dual personality was fascinating because he pulls of charming and menacing in the same breath so convincingly. Lou Diamond Phillips does a great job playing the tough cop with a conscience, battling both his morals, his duty to his fellow officers and his live in girlfriend (Chelsea Field), who also happens to be a reporter hellbent on uncovering his secret and exposing the S.I.S., a fact that his new partners are aware of and do not take kindly to. There's also Yaphet Kotto as one of these S.I.S. guys, only in full cowboy getup, which just looks...........odd.

But what really drives you nuts about this elite group of cops is the fact that they always know when something is going to go down, only they stand by and "let" it happen so they can catch the bad guys in the act. In one shocking instance, they stand by as a woman is kidnapped and raped in the back of a van knowing full well what's going on. Powers, incensed and appalled just can't contain his anger and stand by helplessly as a woman is getting raped by a group of 3 guys, takes a stand by disobeying orders from Vaughn and engages the 3 rapists in a gun battle, blowing the cover of the S.I.S., which ultimately becomes the beginning of the end for his career with the group and the downfall of Vaughn. The victim get's killed anyway, as do the rapists and that's a recurring theme that Powers just can't get used to. There are so many casualties in almost every case they take on, so much bloodshed and unnecessary violence without ever attempting to even apprehend these guys before they do anything bad, yet nobody get's reprimanded and the S.I.S. almost always get off Scott Free.

All in all, not one of director Mark L. Lester's best efforts, but definitely not one of his worst either. A good solid piece of 90's action, if a little on the outlandish side. Good fun though, you should enjoy it.
Posted by robotGEEK at 8:56 PM