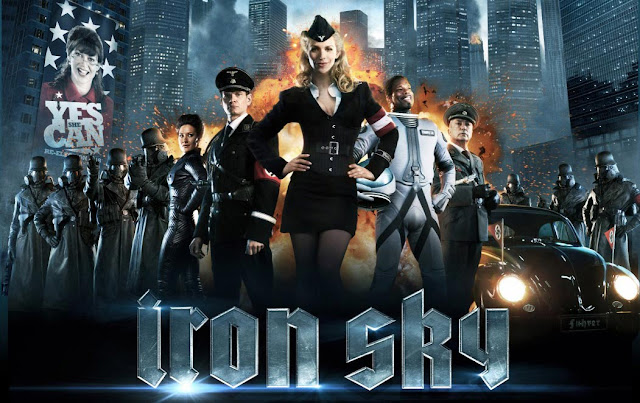 You know when you're about to watch a movie, and you don't really know anything about it or anything about the people who made it and all you know is that you've heard a few things here and there online about how it's a low budget movie, and somehow made with the financial help of fans and that it's a mish mash of genre's and categories and so you don't really know what to expect and then it exceeds all your expectations and then some? Well Iron Sky is that film. Iron Sky literally blew me away with how awesome, inventive and creative it was right from the beginning, only getting better and better as it progressed until the thrilling final act where you're treated to an amazing display of special effects that seem to have been made on a minuscule budget, only looking so much better than half of the big budget garbage being shown in our theaters today.

To me, this is what Sky Captain and the World of Tomorrow should have been. I love that film, I even have a rare Comic Con art deco poster hanging on my wall, but it all felt very amateurish and couldn't help but feel how much better it would have been had a more experienced director been at the helm. Yea, I know, the guy never made a big budget film before, so I will cut him a little slack for creating a very impressive looking film. But for my money, Iron Sky is the film that Sky Captain should have been. It's got an insane amount of action, plenty of humor that actually works, some suspense, thrills and really good use of special effects that you just wouldn't expect to see in a film this small. Which only adds to amusement of how good this film ends up being because it's a seriously entertaining flick from beginning to end, retaining a constant fun vibe all the way through.

Long story short: 2018, some Nazis somehow found there way to the moon, hiding on the dark side for over 70 years after World War II in 1945. After a group of astronauts stumble upon there base, one of them is captured and taken prisoner. Convinced this American astronaut is a spy and is part of a bigger conspiracy to attack and infiltrate them, they decide to attack Planet Earth.


I think the cast of unknowns here were all pretty great and effective in portraying the kind of characters they were trying to portray, almost at a cartoon or parody level at some moments. I will admit, there were a few scenes here and there that didn't work, but for the most part it all works fine. Even the sillier moments. But that's okay, because it does get serious off and on, and when the shit hits the fan in the last act of the film, it's impressively done. I think this director has a big career ahead of him and I'm curious to see where he goes from here. I don't know what the release dates are for this as I know it will be different everywhere. I don't think the U.S. will be seeing an official release for some time, so I'm very grateful and thankful to Ingo over at Hellford667 Movie Reviews for giving me the chance to. Thanks man! To check out his review of this awesome flick, go here.

Posted by robotGEEK at 8:49 PM