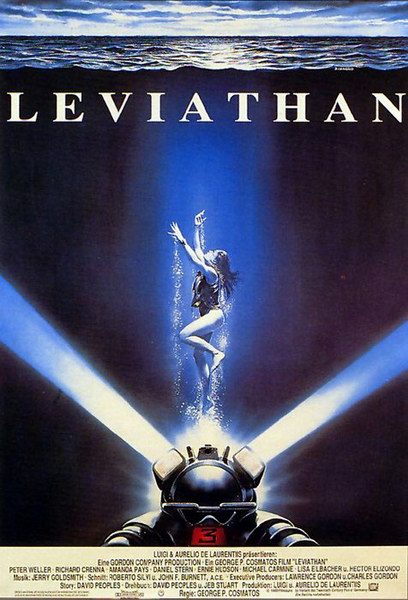 1989 was oddly a big year for deep sea films. Just in this year alone we had Leviathan, Deep Star Six and James Cameron's The Abyss. Nobody can argue that Cameron's The Abyss is the best of the bunch, but for my money, I'd have to say George P. Cosmatos's Leviathan is easily the second. While The Abyss plays a lot to the fantasy/sci-fi genre with some drama thrown in, Leviathan often times feels like a horror film underwater. In fact, it has a lot in common to John Carpenter's The Thing, only it's underwater and the creature they do battle with is not an alien. But it has a big The Thing feel to it. Deep Star Six however, I remember nothing about other than it was directed by the original Friday the 13th director and starred 1/2 of the father duo on that 80's show My Two Dads. But anyway, we're here to talk about Leviathan, so let's get crackin'.

My good buddy Ingo over at Hellford667 Movie Reviews recently saw this one, and from what I remember he liked it. I honestly hadn't seen it since maybe the 90's and like Deep Star Six, remember nothing about it and when Netflix recently added it onto there Watch Instant list just the other day, I jumped at the chance. I've recently been on this extreme late 80's, early 90's Cinema kick and this one got me excited to watch. And that's one of my biggest problems when watching films, I have to be in the right mood or mindset to watch certain genre's of films. That's why I'd make a horrible reviewer for hire. I just can't go watch anything whenever. I have to be in the right mood or I just won't enjoy it.

Leviathan is a good ol' fashioned monster movie. You've got great visuals by Cobra and Rambo: First Blood Part 2 director George P. Cosmatos. You've got some nifty practical creature effects by none other than Stan Winston himself. You've got a better than expected score by Jerry Goldsmith. You've got Peter "Robocop" Weller being a badass surrounded by an awesome ensemble cast which includes the impossibly cute Amanda Pays and you've got two screenwriting powerhouses penning this sucker in the names of Jeb Stuart (Die Hard, The Fugitive) and David Webb Peoples (Blade Runner, Unforgiven). If all that's not enough to get you excited enough to see this then I just don't know what is.

A crew of underwater deep sea miners on the last leg of there 90 day stint encounter a sunken Russian vessel. When one of them brings a safe containing vital information on the ship and it's crew as well as other items, the crew soon realize something horrible has been unleashed in there station, something that kills them off one by one and seems to absorb their memories. It's up to Steven Beck (Peter Weller) and his remaining crew to take a stand and find a way to destroy the creature while simultaneously finding a way to escape to the surface where a hurricane is looming above.


It's really difficult not to get into the specifics of the plot because it will unfortunately give too much of the little surprises away that aren't huge by any means, yet pay off nicely when revealed as the story progresses. So that little summary up there will just have to do. But it had a healthy dose of surprises that made it above average quality, if somewhat similar to a few other notable films like The Thing and Aliens. In fact, I would have to say it owes a "lot" to those two films. Yes, it's a smaller and cheaper looking version, but fun all the same.

As I mentioned before, this has a pretty stellar ensemble cast, with each getting plenty of screen time and plenty to do. The one I really dug was Richard Crenna (Col. Trautmen from the Rambo films), who plays the character of Doc aboard the mining station. He's a good guy, and seems good at his job, but there's always this underlying feeling of something's just not right about this guy. Like he seems like a great stand up guy and all, but seems to be hiding something from his past, or seems to be capable of something...........dangerous. I'm not going to tell you whether he is or isn't in this film, but he played him so well that you just can't tell. Some other notable character actors that make up the rest of the mining crew are Daniel Stern, Hector Elizondo (no relation to me by the way), Ernie Hudson and Amanda Pays, who I remember from Max Headroom.

I wouldn't say this is a slow burn kind of film, because even though things take a short while to get going, the look and feel of the film make up for the lack of suspense until they discover that mysterious sunken vessel, which isn't very long into the film. Then things start kicking into gear and the pace picks up tremendously, offering some really good tension and suspense with some good ol' fashioned creature effects. Maybe not as good as Rob Bottin's work on The Thing, but cool nonetheless. There's also a really gnarly sequence in here that I just loved. It's the sequence where the remaining crew decide it's time to take a stand and protect themselves and they start pulling out all these crazy weapons that they would normally use on the job underwater. They don't have guns, but they do have crazy looking retro future industrial chainsaws and flamethrowers that look awesome. And it's a great montage with creative angles and quick cuts. Thank you George P. Cosmatos.

I've heard a lot about how Cosmatos didn't really direct a lot of both Cobra and Tombstone, leaving both Stallone and Kurt Russell to have to finish directing duties themselves to an extent. I don't know if all that's true or not, it very well could be, but I will say that Leviathan "looks" like a George P. Cosmatos film, much like Cobra, Rambo: First Blood Part 2 and Tombstone did. They all possess a similar look and style and Leviathan is no different. Great ensemble cast, great look and a helluva lot better than I was expecting it to be, this should be on your immediate watch list if you haven't seen it in a while.
Posted by robotGEEK at 8:02 PM