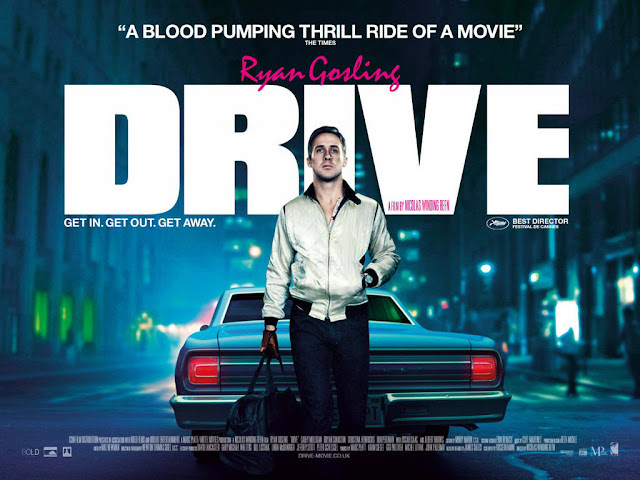 You know how it is? You really, really want to see a film when it hits theaters and then when the festival circuits and even the damn critics praise it you want to see it even more but for one reason or another you just never get to that damn theater? Well that was me with this film. I never got a chance to check this out when initially released and even though it's been out on DVD for some time here in the states, I only just now got a chance to finally sit down and watch it.

Drive really surprised the hell out of me in the best way possible. What surprised me most about this is that it's not the film I was expecting to see at all based on the trailers. It actually ended up being much slower in pace than I had imagined, yet still retained an incredible aura of badassery. And what really sets this film apart from a lot of the others is it's immense style. From director Nicolas Winding Refn's impressive and fluid camera work to Gosling's hip 80's inspired threads to the outstanding supporting cast. It all comes together so damn well that though there wasn't nearly as much action as I was expecting, I was instantly submerged in this world of Hollywood stunt drivers and Jewish gangsters right from it's opening frame.

While I'm throwing accolades all around I really need to give it to Ryan Gosling. He was the last person I would have ever expected to star in a film like this and the guy didn't disappoint. He hardly utters a word in the entire film, but his sense of self assuredness and quiet bravado explode out of every pore of his body, his stare and his mannerisms and the film is a thousand times better for it. The same can be said for Ron Perlman, the always great Bryan Cranston and another shocker for me, Albert Brooks who plays a gangland heavy. I just couldn't believe I was watching "the" Albert Brooks stabbing a guy in the eye and throat with a knife just to prove a point to his partner in crime. Against-type casting. Gotta love it!

Driver (Gosling); can't remember if they even give him a name in here other than his boss calling him "kid", is a Hollywood stunt driver and mechanic by day, who moonlights as a getaway driver with a strict set of rules by night. His boss in the garage (Cranston) has bigger dreams for him though. He wants to set him up as a race car driver but needs the funds to get that operation started. Enter gangsters Bernie Rose (Albert Brooks) and his partner Nino (Ron Perlman) who agree to fund his racing operation in exchange for a big chunk of the action. In the meantime Driver has also recently taken an interest in his single neighbor (Carey Mulligan) and her little boy. Things start looking good for them and he even starts to break out of his shell somewhat until he finds out she's actually married and her convict husband is soon to be released from jail. What follows is a tragic series of events and incredibly bad choices on everyone's part that leads to a bloody climax of revenge and redemption.

Though the film lacks the copious amounts of violence and car chases that I was expecting, what violence there is on display is fucking intense and amazingly executed. Dido for the two "getaway" sequences in the film. On a technical and visual level, they simply outdo any of the other sequences of the film. But that's not to say that the quiet scenes in the film aren't just as entertaining. Though not quite on par with the exciting sequences in the film, they are what glue the film together. Sure, any scene with Gosling in it won't have but a few words of dialogue, but seeing him watching cartoons with his cute neighbors kid was somehow enjoyable as well. But in that weird semi-psychotic way where you think or hope that something bad is going to happen at any minute. Or is that just me?

There are a few minor issues I had with it though, the main one being the casting of Carey Mulligan. I don't know, she just didn't do anything for me and isn't really offered much to do at all in here other than to look like she's high half the time with her constant mopey stares, which she does "a lot" of in here. She's always "staring". You also wonder what it is about her that Driver finds so fascinating. I mean, he's gone this long living by his strict set of rules lying below the radar obviously hiding from something from his past but for some reason he's head over heels for this chick and her kid that you probably wouldn't give a second thought of if you passed her in the supermarket. Another would be the character of Driver. He's tough, quiet, strict and seemingly not afraid of anything. Yet he makes some truly horrible decisions in here that ultimately affect "everyone's" lives. So he's not nearly as awesome as you begin to think and you realize that he's just not very good in the decision making department.

Nicolas Winding Refn is a force to be reckoned with as a director. The Denmark native would seem an odd choice to direct this kind of film on the surface, but after watching it I couldn't imagine anyone else doing it or giving it that special "something" Refn was able to. If they had gone with a standard Hollywood action director I think they probably woulda gone with someone like Tony Scott, who I love dearly from some of his earlier films, but has left me so dissatisfied with all of his recent output by changing up his trademark visuals and beautiful imagery and switching to handheld kinetic camerawork. Come on man! But anyway, I never saw Refn's Pusher trilogy, but I did see Bronson with a very imposing Tom Hardy in a tour de force performance. It had a weird structure, but stylistically it was pretty damn impressive and on par with the visuals of Drive. And I've heard mixed reviews on Valhalla Rising, but as Netflix currently has it streaming I'll definitely give it a shot now that Drive impressed me so much.

Drive manages to cram action, nail biting suspense, intense violence, expertly choreographed getaway sequences, a quiet stranger falls for his cute neighbor and her kid story and hard edged gangster drama all into one for an immensely satisfying 100 minutes of your life.
Posted by robotGEEK at 10:11 AM