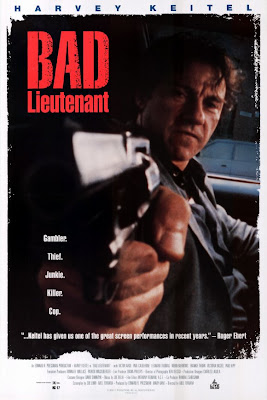 I never got around to watching this one when it first came out. Even with all the press it got for how graphic and gritty it was, I still never felt the need to make an effort to seek it out. I think a lot of it has to do with writer/director Abel Ferara. I still haven't found a film of his that I am particular fond of and have never warmed up to his style of filmmaking. Which is just as well since I can't remember the last time I was as bored as I was while watching this.

I should also mention that it wasn't until "after" I finished watching this that I realized I was watching a severely edited R-rated version, even though on Netflix it stated it was NC-17. And I guess that can go into a whole other discussion about Netflix too. I love it, and if it wasn't for Netflix, I wouldn't be able to see most of the films that I love. But, it's also like a catch 22. When it comes to certain films that are offered in different cuts or different ratings, you never know which version you get with them, much like Scott Spiegel's Intruder. I was excited to finally get a chance to see it when it was available on Netflix Instant, only to be let down after half way through I realized it was a severely edited version almost completely devoid of all the famous gratuitous gore that it's so famous for. Right off the bat in Bad Lieutenant, the rape sequence (a key plot point - or so I though - in an almost nonexistent storyline) was merely a 5 second scene and a few other key sequences that garnered so much attention were also missing. Like the sequence where he pulls over the two girls for driving there dads car without a licenese and a full frontal nude scene of Keitel that I heard so much about. But I don't think having had them in here would have changed my overall feelings about it because in the end, ultimately I was just bored out of my skull.

Bad Lieutenant does have it's points though. It's got a cool title, a great lead and performance from Harvey Keitel and a realistic and gritty atmosphere. That I will give them. What it's missing is a cohesive plot or storyline and one main ingredient that could easily have saved this thing, violence. Yes, I think maybe 2 or 3 scenes of action, gunplay or just a few brutal sequences of gratuitous violence would have made a world of difference. In the version I saw, he literally fires his gun once, and it's only to scare two thugs and not actually hurt anybody. After everything I'd read about this film and Keitel's character (who I'm sure isn't even given a name in here) and how violent, vile and horrible he was, I thought I'd in the least see him throw down a couple of beat downs or even kill someone in one of his drug induced stupors. But that's not the case. What we get instead is a day to day showcase of a very bad cops self indulgent tendencies on a day to day basis. Basically, doing an insane amount of drugs like every 5 minutes, hooking up with his prostitutes, gambling up a storm and falling deeper and deeper into debt and stealing cocaine from the job to sell back onto the street. Somewhere in there they work in a small little subplot about a nun getting raped in a church, a storyline I thought would take center stage in the film, but that was not the case. It's brought up here and there but shockingly never becomes the focus of the film.

All in all, an ok film from an independant auteur with a stellar performance from Harvey Keitel. Too slow for my taste and not the kind of film I was expecting to see. I'm sure that was the whole point from the filmmakers from the beginning, which is fine. I'm sure they made the exact kind of film they set out to make, but just not my kinda film.

Posted by robotGEEK at 7:27 PM