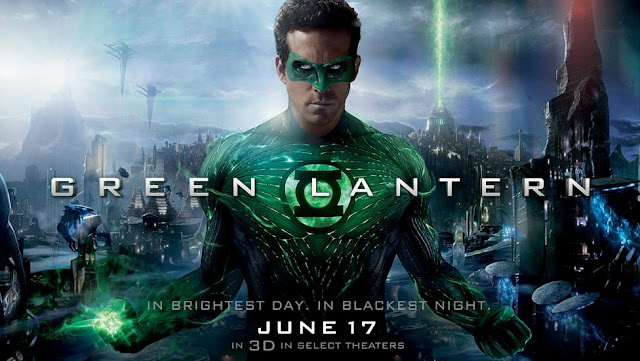 You know, this wasn't nearly as awful as I was expecting based on all the negative press it received. It's not great, but it wasn't horrible either. It's just kind of........there. I think that's the same reaction most people are having with Ghost Rider: Spirit of Vengeance right now, which I still haven't seen.

I've always been a comic book fan, nearly my whole life, but Green Lantern was not a title I was ever drawn to or interested in, so I'm pretty much like the average moviegoer with this one, not really knowing the whole mythology of the Green Lantern Corps. So I know they made some major changes to the story and some characters and all that, but I couldn't tell you what they are.

First and foremost, I hate the suits. I mean, they just look ridiculous. And the fact that they are CGI only makes it a thousand times worse. And the mask, the fact that it can appear and disappear at will, which makes "that" CGI as well, lame. And I know I'm not alone on that train of thought. Come on, the whole getup just looks silly. Since the Green Lantern gets his power from a ring, which he can use to "will" up anything he wants you know there's going to be an insane amount of CGI, but the suit? Bad move. And while I'm on the subject of CGI, though as I mentioned before, I don't know the whole story about the Green Lantern Corps or Oa (there home planet), I just didn't dig the look or style of there planet, of which Hal Jordan aka Green Lantern, only spends a tiny fraction on in the course of the film.

But you know, it had a decent pace, some good effects (Oa and the Green Lantern suit not withstanding) and stunt work, a couple of cool action sequences and a cool subplot involving Hal Jordan's old childhood friend Hector Hammond (Peter Sarsgaard), who gets infected by an alien virus after examining the body of Abin Sur, the Green Lantern who crash landed on Earth looking for a new replacement. I actually wish that was the bulk of the story and not the whole thing with the all consuming Parallax. Watching Hector slowly transform from mild mannered and timid Hector to an alien superhuman was pretty badass and I felt that they didn't dedicate enough of the story to that little subplot. But hey, this is the first with a planned second already in development so maybe they'll learn from there mistakes, especially regarding the suit. My god.

Though the trailers never hinted at it, I thought director Martin Campbell did a decent job with the visuals and look of the film and keeping the film moving along, not really letting it slow down long enough where you start to get bored, as some origin stories often do. But it always felt like it was missing "something". That something that would have elevated this thing to about a 7 or even an 8 on a scale from 1 to 10. But as it is, I'd give it maybe a 6, and that's being slightly generous because that ridiculous CGI suit is such a fucking distraction. Let's hope with the sequel they'll produce something more organic both in terms of the suit and effects. There was so much of it in here that half the time you'd think you were watching an animated film. That's all for now, robotGEEK out.
Posted by robotGEEK at 8:31 PM