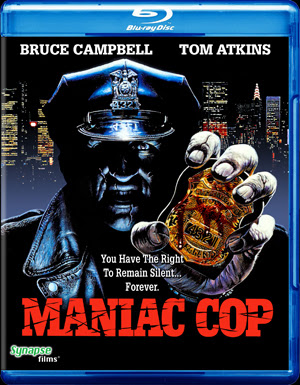 According to Empire Magazine, Drive director Nicolas Winding Refn is producing a 4th Maniac Cop film with original writer of all 3 Larry Cohen on board. This is such exciting news! I love this series, and part 2 is without a doubt one my favorite films, as well as the best in the series. Cohen states that it will be more of a prequel than anything, which is fine with me. With Refn on board, you know it's going to be good, bloody and violent. That's all I want. Now my question is who are they going to get to play a young Matt Cordell?

Here's the article from Owen Williams via Empire Online:


Some successful and acclaimed filmmakers use their clout to take deep sea submersibles where no one has gone before, for the enlightenment of all mankind. Others like to revive moribund horror franchises. Nicolas Winding Refn belongs to that latter camp, and is apparently planning on being instrumental in reviving the Maniac Cop.
The gleefully scuzzy Maniac Cop series, should it have passed you by, belongs to the Larry Cohen school of genre exploitation, and is about an undead police officer on a killing spree (three of them, ultimately). The 1988 original stars two famous chins in Bruce Campbell and Robert Z'Dar. Z'dar continued on his maniacal path through both sequels; Robert Davi did the investigating in the second and third instalments; and part three (Badge Of Silence) has Jackie Earl Haley in it. All three were produced by Cohen and directed by William Lustig (with help on the third from Joel Soisson).
Nicolas Winding Refn (who dropped a clip from Lustig's Vigilante into Drive) has, according to Cohen, been "talking to us about [a fourth Maniac Cop] for a while now," and will be using his post-Drive muscle to get the film going, joining Cohen and Lustig as a producer.
"It's going to be more a prequel than anything else," Cohen reveals, "with a bigger budget than the others have had. I'm really excited to come back to this world, especially since Nick is going to be a part of it." Lustig meanwhile, cautions that the film "isn't 100% signed off on, but it's pretty close."
There's no announced director yet, and the likelihood of Refn taking his fandom quite that far is extremely low, we'd imagine. Lustig could be a possibility, but hasn't directed anything since 1996. Will there be new blood behind, as well as in front of the camera? We'll keep you posted...
Posted by robotGEEK at 10:08 AM