Help Get Clive Barker's Restored and Uncut Nightbreed Released on DVD! Read how you can help below!

This is a project that I'm extremely passionate about ever since I heard this thing existed about a year ago. I mean, I already love this film to death, but the thought of a much longer extended cut that clocks in at an impressive 155 minutes makes me extremely giddy. Please, if you are a fan of Nightbreed, you owe it to yourself to read this article by the good folks over at Geeks of Doom along with the link to the petition page with even more info on this amazing cut, dubbed The Cabal Cut.
Here is the article via Geeks of Doom:
On February 16, 1990, Nightbreed, British horror author and filmmaker Clive Barker‘s second feature as a director, opened in theaters across the country after having its release delayed for months to allow for extensive re-editing and the creation of elaborate visual effects. Barker based the script on Cabal, his 1988 novella about a tormented man named Aaron Boone who is framed as a serial killer by his maniacal psychiatrist Dr. Decker and finds acceptance and amazing powers in an underground tribe of benevolent but frightening creatures known as the Nightbreed. The young director had planned for Nightbreed to be the “Star Wars of horror” and was given an $11 million budget – his biggest yet – to realize his vision.
The film was shot on location in Calgary, Canada, and at England’s historic Pinewood Studios, the facility which has hosted the productions of nearly every James Bond adventure as well as various Superman and Batman films, Aliens and Alien 3, and most recently Captain America: The First Avenger and the upcoming two-part adaptation of The Hobbit. Ralph McQuarrie, the late conceptual artist who helped George Lucas sell 20th Century Fox (the studio that would eventually distribute Nightbreed theatrically) on the first Star Wars, was brought in by Barker to provide important matte paintings and a mural that would depict the dark and twisted history of the Breed during a key sequence in the film.

Once the film was completed executives at Fox demanded extensive cuts, bringing the running time down from two-and-a-half hours to two hours and finally to 102 minutes. Many integral scenes hit the cutting room and were consigned to the scrap heap of film history. The studio’s marketing department was aghast at how best to sell Nightbreed to the American moviegoing public since it featured no major movie stars and it blended genres – in this case, fantasy and horror – instead of confining itself to something more easily definable that could be summed up in a brief trailer or television spot. The Motion Picture Association of America rejected the film’s trailer twelve times and decreed that no footage of the monsters were to be shown, forcing Fox to market Nightbreed as another low-rent slasher flick in the television and print portion of its campaign.

The film was also not screened for critics, as the studio, in the infinite wisdom that cost them the Star Wars franchise, decided that horror fans didn’t read reviews anyway. The combination of a heavily compromised cut of the film and a misguided marketing campaign led to Nightbreed only grossing $3.3 million in its opening weekend and a total domestic haul of $8.8 million at the box office. 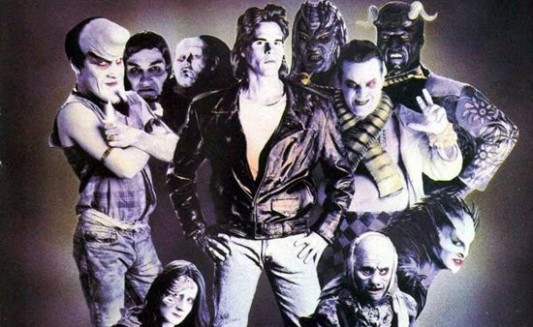 When the movie was released to video and later DVD, it was in its truncated 102-minute form but still managed to build a cult following. The deleted footage was believed to be lost for years in the vaults ofNightbreed‘s financier, Morgan Creek. In 2009, Mark Miller, the co-head of Clive Barker’s production company Seraphim Films, began an exhaustive search for the missing scenes with the intention of restoring Nightbreed to its original running time. Discussing the matter with an executive at Morgan Creek, Miller discovered that the footage wasn’t lost at all; in fact, the elements were available to finally restore and release the uncut Nightbreedon DVD and Blu-ray.

Unfortunately, Miller was also told that the studio had no interest in financing a full restoration of Barker’s original vision as they believed there wouldn’t be a big enough audience for the release to justify the cost and effort the project would entail. Since then a grass roots effort to get Barker’s intended cut of Nightbreed released has emerged online and the results have been astounding.

In the summer of 2009, shortly after Miller’s search began, VHS copies of two workprints of the film with varying lengths – one running almost an hour longer than the theatrical release – were discovered, and in 2010 the 159-minute version was screened to a rapturous response at the HorrorHound Weekend convention. In July of that year, Morgan Creek Productions reversed its earlier position and revealed that their own search of their archives did not lead to the unearthing of the fabled deleted Nightbreed footage, telling the official Clive Barker website Revelations:

“So I have a bit of sad news to relay. After MUCH digging, hunting and trying our best to unearth where (if at all) the missing Nightbreed footage might be, we’ve come up empty handed. Therefore, that VHS that was screened at the convention is the ONLY footage that exists of a director’s cut.”
Most recently a composite version called the Cabal Cut was pieced together by Russell Cherrington, a senior lecturer in film and video production at the University of Derby, using the theatrical release cut and deleted scenes shown in the two VHS workprints to create the longest version ofNightbreed. The Cabal Cut was screened on March 24, 2012 at the Mad Monster Party convention.

Now there is a growing movement online to restore and release Barker’s original cut on DVD and Blu-ray and it has been given the name Occupy Midian. Some restoration work has already been done by Seraphim Films, including allowing actor Doug Bradley (best known for playing Pinhead in the Hellraiser movies) to re-dub the dialogue spoken by his character Lylesberg, the leader of the Breed, as his performance had been overdubbed by another actor prior to the film’s theatrical release.

You can watch the video of Bradley’s recent ADR session here below.

There is more information about the restoration effort at the Occupy Midian Facebook page. You can go here to sign a petition if you want to see Nightbreed finally released as its director originally intended on a fully restored Blu-ray.

Personally I would love nothing more than to see this wonderful and visionary film restored to its original running time so that Clive Barker’s creation can take on new life and become the epic of fantastic horror it was meant to be. I fully intend to support Occupy Midian and I hope you will too. This is a cause worth fighting for.