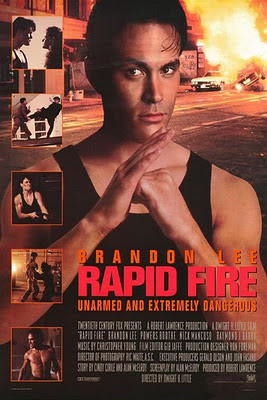 This was my first introduction to the late-great Brandon Lee. When this hit theaters, I don't think I had seen Showdown in Little Tokyo yet for some reason, probably because it never hit theaters down where I lived. But I just remember being super excited that a child of Bruce Lee was making movies as well as being a distinguished martial artist. The trailers promised something pretty badass and also knowing that the director of Steven Seagal's awesome Marked for Death was at the helm got me even more excited.

Jake Lo (Brandon Lee) is a college student who happens to be the son of a civil rights activist who was murdered during a demonstration. When Lo is invited to a charity function under the guise of a date with a pretty girl, he witnesses the murder of a drug kingpin by a fellow mob and drug dealer. Caught between two feuding drug lords he is enlisted by the FBI for a sting operation, only to be double-crossed by them and on the run. When he meets tough Chicago detective Mace Ryan (Powers Boothe), he agrees to help him bring down the drug lords in an effort to clear his name.

So how does Rapid Fire hold up all these years later? While I did enjoy watching this and it does have a lot of action to satisfy the action fan in me, I also found it to be very bland in terms of the style and even some of the action sequences. Nothing really stood out, except maybe for that badass showdown between Brandon Lee's character and cult icon Al Leong. That fight, I must say, was pretty badass and it was nice seeing Leong have a much bigger part than what we're used to when he's usually somewhere in the background looking like a bad guy and not really given much else to do. Here, refreshingly, he's given an extended part where he plays sort of a bodyguard to the main villain of the film and when he and Brandon Lee square off in the end, it's truly one for the ages. But take out that awesome fight sequence and the rest are only kinda "OK" and unmemorable, which is tough considering Lee's and stunt coordinator Jeff Imada's talents.For me, I think it lies squarely on the shoulders of director Dwight H. Little. I don't know, it just didn't seem as stylish or flashy as his previous effort. And that's not to say that's what makes a film good for me, because in a lot of cases in regards to these kinds of films, in this era especially, it's not or hasn't been really about the visual style. I think it has more to do with the execution of the fight and action sequences. Bad camera angles, sloppy editing in some places and not enough of a distinction between wanting to be a gritty action film like, for example, Seagal's Out for Justice from the year before, or even going back to Chuck Norris's Code of Silence from all they back in 1985 to wanting to be something a little more visually impressive as say director Dwight H. Little's Marked for Death from just two years before. It kind of teeters on trying to be both unsuccessfully and for me at least, became more of a distraction.

Through all my gripes though, there's no denying Brandon Lee's undeniable talents. The guy was just made to be a star and who knows where he'd be had his life not ended so suddenly and so tragically. As a skilled performer, martial artist and actor he didn't need to necessarily throw some martial arts around to be a badass, just look at The Crow for the best example where there's nary a martial arts movie in sight. The guy had charisma, charm and a huge presence that even under a pound of goth makeup as in The Crow, still shone through. Speaking of which, I really need to sit down and watch that one again.

Rounding out the cast here you have the always awesome Powers Boothe as detective Mace Ryan as the sort of father figure in Lo's life. I think it's fascinating how Boothe doesn't seem to even really try in anything, he just "is" and that's good enough for us. Kate Hodge, who I remember from The Texas Chainsaw Massacre III, is fine as the cop/love interest to Lee's character Lo. Nick Mancuso, who I'm ashamed to admit I remember from Blame it on the Night (a film frequently on HBO during the summer in the mid 80's) shows up as a psycho Italian mob boss who goes to war with rival drug lord and former supplier Kinman Tau (Tzi Ma), a guy who's name you might not know, but you've seen countless times on television shows and some films here and there. Basil Wallace, who played the Jamaican kingpin in Marked for Death shows up here as a federal agent with a bad attitude, but only briefly. I think the best thing for me as far as casting goes has to be seeing 4 different small supporting character actors from Big Trouble in Little China. The aforementioned and awesome Al Leong, Donald Li (who played the restaurant manager in BTiLC where Russell and gang would hang and plan), and two other guys I don't know by name, but are familiar. You see those guys and can't help but yell out loud "Big Trouble in Little China!".

Overall a good action/martial arts film, but not a great one. I would have to say that though this is Lee's first big budget solo effort, I actually prefer his previous film from the year before Showdown in Little Tokyo. That one just plain rules.
Posted by robotGEEK at 6:50 PM