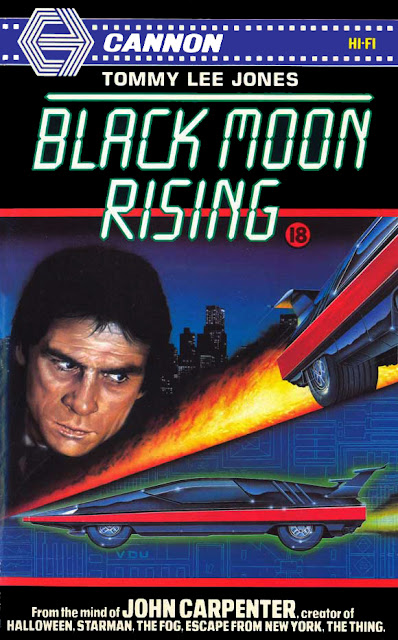 I think I might have only ever seen this one time before. I remember virtually nothing about it, other than the fact that it had a pretty rad car. But chances are that if I can't remember anything about a particular movie, then it wasn't very memorable. I had this on my list for some time, right after Jack Thursby over at Collected Cinema did his review on this back in November, which you can find here. Reading his great review reminded me of how much I enjoy revisiting mid 80's classics or even ones I've never gotten around to seeing before. There's just something about the style and the way films were made in general back then that I'm just drawn to.

Quint (Tommy Lee Jones) is a professional thief who is hired by the FBI for one last job to steal some sensitive data by breaking and entering into a facility and grabbing a cassette tape. While being hunted by the security team of this facility, who's leader apparently knows Quint well and has a long dueling history with, Quint happens upon a racing team and there state of the art vehicle called The Black Moon at a gas station. Knowing the security team is hot on his trail, Quint hides the cassette tape in a small compartment in the back of the Black Moon. The racing team attends a dinner function with there vehicle and the secret tape in tow and bad news for them, a team of professional car thieves led by Nina (Linda Hamilton), steals every expensive looking car from the lot, including the Black Moon, and takes them to her boss who steals and resells high end vehicles from a huge office building. Quint decides to team up with the race team who desperately need there car back as it's one of a kind, which gives Quint a much better chance at recovering the cassette tape hidden in the car. If he can't recover that tape for the FBI, he doesn't get paid and won't get to retire as he hopes.

I had no idea until Jack over at Collected Cinema did his review on this one that the great John Carpenter had anything to do with this. In the film, John Carpenter is credited in story and screenplay (along with two other screenwriters), and it wasn't until this knowledge that I began to notice how much of a Carpenter feel it all has. While it does have a Carpenteresque vibe to it, unfortunately it doesn't represent the best of what the guy has to offer. As excited as I was to finally sit down to see this and then to learn that he was involved in the writing of this thing, I found it to be a little tedious and dull through most of the midsection. Don't get me wrong, the film's made very well with exceptional performances from all involved, even my favorite surprise costar of the film Bubba Smith, who plays s secret FBI agent with a bad attitude and cusses like a sailor. And director Harley Cokeliss (who I'm not familiar with , but who apparently did Malone right after this with Burt Reynolds-which I've always wanted to see) handles the directing duties very well, giving the film a sleek look and feel, especially when it comes to anything involving that awesome car, but I just couldn't shake that ho-hum feeling through most of it. When I started to think about it, I had a hard time trying to even categorize Black Moon Rising. I wouldn't call it a thriller, or an action film, or even a drama because it doesn't possess enough of these qualities to categorize it under any of these genre's. But if I had to, I guess I'd call it a spy thriller since it has a lot of cat and mouse stuff going in between Quint, the girl who stole the car and the bad guys who are after Quint and the stolen data he took from them.

The end is what really saves the film ultimately, which is a shame since you have to wait a good hour before you get to the good stuff. There's a really complicated and high tech plan to break into the huge office building where the Black Moon is housed and there's some pretty cool car chases going on inside this huge office building when Quint and his cohorts attempt to steal back the Black Moon with the help of Nina, who has a change of heart and ends up falling for Quint in his attempt at retrieving both the vehicle and the stolen data. This whole third act ended up being much longer than I was expecting and I enjoyed every second of it. Finally there's something exciting going on and when Quint and Nina drive the Black Moon through the window of one tower and into another about 20 stories up, well that was just plain awesome. And seeing Tommy Lee Jones play somewhat of a reluctant action hero as he does a lot of ass kicking as well as receives a lot of it was fun to watch. He still doesn't look like a tough guy, but he played one pretty good here. Though in all fairness, he does get the living shit kicked out of him quite a few times.

Not the worst that Carpenter, Jones or Hamilton has to offer, and not the most exciting or entertaining either. Too many dull moments in the middle hamper the overall feeling left by this, and even with Jones kicking ass as the self-assured anti-hero, Black Moon Rising won't win over any new fans.
Posted by robotGEEK at 8:52 PM