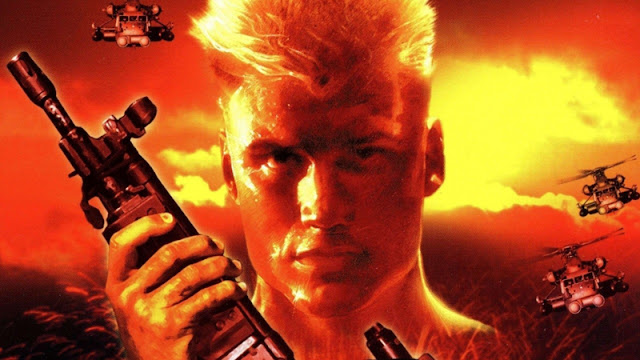 Here's an official update via the camp over at Synapse Films about there upcoming and long overdue official release of Dolph Lundgren's awesome Red Scorpion:
_____________________________________________________________________________
With all the news about the various upcoming international releases of RED SCORPION on Blu-ray (UK, France, Germany, etc.), I just wanted to take a few moments to let you know what's happening with our version, which should be announced soon.
We've been working on our release of RED SCORPION for almost a year now.  We want ours to be the best version available in any country, on any format, and we have been taking our time putting together the ultimate version of the film for our audience.  Not only in compiling some amazing supplements, but also working on a restoration of the original materials to make ours the best looking version released.
Here is a breakdown of some of the features of our RED SCORPION release:
- All-new 2K transfer of the uncensored edition, containing additional footage not found in the original U.S. theatrical release
- Digital restoration of film materials supervised by Synapse Films and Reliance Mediaworks (formerly Lowry Digital), exclusive to Synapse Films
- All-new DTS-HD MA 5.1 Surround Mix, made specifically for the Synapse Films release
- Digitally Remastered Original 2.0 Soundtrack.
- Synapse Films exclusive audio commentary with director Joseph Zito, moderated by Mondo Digital's Nathaniel Thompson
- HATH NO FURY - DOLPH LUNDGREN AND THE ROAD TO RED SCORPION - Video Interview with Dolph Lundgren
- ASSIGNMENT: AFRICA - An All-New Video Interview with Producer Jack Abramoff
- SCORPION TALES - An All-New Video Interview with Special Make-Up Effects Creator Tom Savini
- Original On-Set Behind-the-Scenes Video Footage
- Animated Still Gallery
- Extensive Liner Notes on the Making of RED SCORPION by Jérémie Damoiseau
...and the list of extras is growing daily... we're still working on some other things to add!
And, yeah, you read that right up there... we DID get Jack Abramoff. I know a lot of people made some jokes about getting him to do something for us while he was in prison.  Well, we just waited for him to get OUT... and he agreed to give us an interview. It's a really cool thing and Jack was a great guy.
We worked closely with two companies to help us with extras for our release.  Both RED SHIRT PICTURES and BALLYHOO MOTION PICTURES have put together some GREAT stuff.  And a big congratulations goes to Tom Savini who not only gave us an interview, but raided his footage archive to give us some great behind-the-scenes "on the set" footage that no one has seen in 14 years.  And big thanks to Dolph Lundgren for allowing us into his home for a great retrospective/interview about his career.
RED SCORPION is also being digitally restored by the same folks who did the Indiana Jones films, Once Upon a Time in the West, the Godfather Trilogy, The Alien films and, most recently, the all-new 4K 3D restoration onTITANTIC. We are thrilled to be working with them on this, as well as many future releases for Synapse Films.
Our release is going to be superb, not to mention a Blu-ray/DVD combo pack, so you get both formats in one package.  Also, our release will be encoded for ALL REGIONS for both the DVD and the Blu-ray.
We're going to announce it in the coming weeks.  Remember the old saying... "Good things come to those who wait!"
Posted by robotGEEK at 2:59 PM