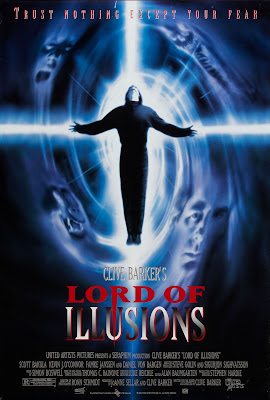 Wouldn't you know it? Immediately after watching the theatrical cut I find out there is actually an "unrated directors cut" which Clive Barker says is his true vision of what Lord of Illusions was supposed to be, one that runs a full 12 minutes longer. So that will have to be a later review, with this one being of the theatrical cut of the film.

I've always been a big fan of Clive Barker, and around the time he made Nightbreed and Lord of Illusions, I would consider myself a die hard fan. So much so that when I got my first tattoo at 19, it was of one of his illustrations. To this day nobody knows what the hell it is and I still have to explain it to them. But I love it. Around that same time I had every single book, novella and short story he ever published and couldn't get enough of his writing style. The he started making movies and in the late 80's to mid 90's with the triple threat of Hellraiser (1987), Nightbreed (1990) and then Lord of Illusions (1995). But that's it, he hasn't directed a film in almost 20 years, which still shocks me because with each film he showed a maturity and growth, much more than your average newcomer horror director. But sadly, that wasn't the case. Lord of Illusions was his last directing gig and the world of horror is sorely missing a true visionary.

Detective Harry D'Amour (Scott Bakula) is a private eye who seems to constantly sway towards cases relating to the supernatural. When he's hired by a famous magician's wife (Famke Janssen) for a job, he witnesses the magician's death and soon realizes that there's more going on than he was first led to believe. When he discovers a connection between the magician Swann (Kevin J. O'Connor) and Swann's former teacher and cult leader Nix, who Swann killed 13 years earlier, he opens up a Pandora's Box of death and magic that could lead to the end of the world.

"I was born to murder the world"

Lord of Illusions, while not perfect or as awesome as his previous effort Nightbreed, works really well as a hybrid of two separate types and styles of films, the detective noir films from the 50's and a modern day horror film. One of the best things I love about this film is that you immediately sense Barker's maturity as a director. The film oozes style at almost every turn and looks much more polished than his two previous efforts. But, I have to admit Nightbreed is still my favorite. He also infuses the film with an eclectic array of strange characters, some good, some bad, that are so unique and outrageous (complete with odd names) that they almost deserve a film of there own. And that's just a testament to his creativity. The guy knows how to create some truly unique characters.

I really liked this one. It starts with a strong opening, slows down for the majority of the middle, and ends with a pretty grande finale. When the film slows down for the mid section, it plays out more like a detective story as D'Amour is investigating what the hell happened to Swann and what he may have been mixed up in. Some people may find this midsection to be extremely lagging, especially when your trying to remember the odd names with the large cast of characters, but I found it entertaining nonetheless because the cast is pretty great, especially Bakula, and the look of the film is pretty fantastic. But once he realizes there's a dark and supernatural connection to the illusions and that it's real magic and not tricks, the story delves more into the horror elements culminating in a pretty far out ending complete with some outstanding effects and some awesome quotable lines. Barker has always been ahead of the game in creating some pretty great dialogue. To this day, Hellraiser is still one of the most quotable horror films ever.

Overall a pretty great film. The film lags for a majority of the middle, but the combination of some great camera work, great actors and the kind of huge finale all films should have, really make for a much better experience than you'd expect. I just need to get to that "unrated directors cut" soon while this one is still fresh in my mind for a decent comparison.
Posted by robotGEEK at 10:05 PM