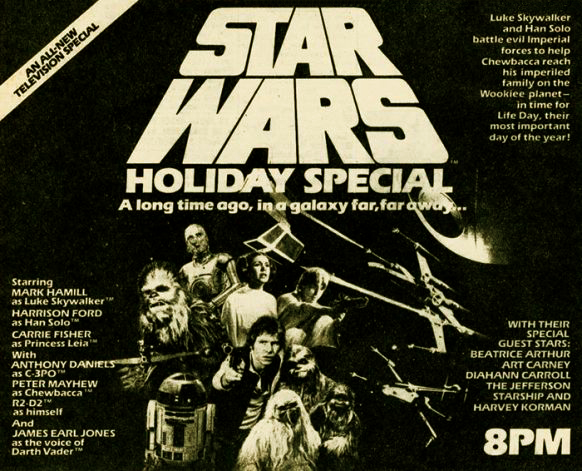 Oh yes people! This thing does in fact exist and it aired one single night on CBS back on November 17, 1978 before it was banished forever. My first immediate thoughts roughly 5 minutes into this? "What the hell were they thinking"? To take something so sacred to so many people all over the world and do this to the Star Wars name is just incomprehensible. Epic. Truly epic in it's awfullness and pushes the limits of how truly weird one show can possibly be.

Seriously, it's pretty dreadful and how the hell they got Harrison Ford on board for this is beyond me. It must have been in his contract because if you know anything about the guy and his disdain for this kind of thing you'd know he more than likely wouldn't have done it.

It is Lifeday on Chewbacca's home planet of Kashyyyk. Chewie and Han Solo are trying to make there way to Chewie's home through the galaxy via the Millenium Falcon so he can celebrate the most important day of the year for the Wookies. However, the Rebels have other plans and are hot on there trail, preventing them from reaching his home. Meanwhile, we get an incredibly boring look inside the goings on of Chewie's family life which consists of his wife Malla, his father Itchy and his son Lumpy. We watch Lumpy and Itchy have a fight, Malla learning to bake some dish with Bantha meat off of the television program she is watching (You read that right. We are treated to a very long sequence of Chewie's wife baking a dish) that's hosted by Harvey Korman in drag, and also a peek into the daily lives of other residents, like a shop owner and family friend by the name of Saundan (Art Carney) and the bartender of the Cantina, played by the one and only Bea Arthur.

Immediately you're hit with how bad and how strange it all is. I mean, the opening segment of Chewie's family is so long, drawn out, completely weird and dull as hell. And the whole thing with the cooking show? It really is as dull as you can possibly imagine. You have to stop and think, "That's what they're doing a Star Wars Holiday television special about? Chewbacca's wife learning how to cook?". And in all honesty, I have no idea whether any of this was meant to be funny or play out like a drama, because I honestly can't tell. There's a scene where Chewie's dad decides to use a visual aid machine that can only best be described as Wookie porn. I mean, that scene is so weird and uncomfortable and I seriously can't believe it was on national television and nobody made a stink about it. But I guess it was alright because the fantasy ends up being about Diahann Carroll who then begins to break out in a song.
And then............you know what? I'm not even gonna bother with the play by play because this thing is just plain ridiculous, so incredibly dreadful and cringe inducing that it's no wonder it's gone down in history as one of the worst things ever produced for television. It's so bad that it has only aired 1 single time, "ever", and that's it. No VHS release, no laserdisc release and certainly no DVD release. They will never release this thing officially and for very good reason. I'm sure it's something they wish they could bury forever, but because a few brilliant people decided to record it on there VHS recorders back in November 1978, it's been reproduced over and over and over again and readily available on the internet if you look in the right places.
The one and only saving grace out of this entire thing is the short animated segment that lasts 9 minutes and 40 seconds. This thing just plain rules and looks like something that came right outta Heavy Metal. It's also the absolute very first time the world is introduced to Boba Fett and he is such a badass in this. Even the guy who voices his character is awesome. What a way for an introduction into the Star Wars univers. The segment has something to do with Luke and Chewie looking for a talisman and running into a bounty hunter by the name of Boba Fett who ultimately betrays them, but that's really all I can get from it. It was just really cool to see with some old style, yet hip animation that broke up the monotony of the rest of this thing.
The Cantina sequence. Yup, taken right outta Star Wars, complete with the same band and all, only this time the bartender is none other than the Golden Girl herself, Bea Arthur-who plays Ackmena, who of course breaks out in a Star Wars song. Huh? And the weird thing is that this sequence has nothing to do with Star Wars. Instead, it's about a guy (Harvey Korman) who goes into the bar to hit on the bartender, Bea Arthur, because he felt something the last time he saw her there. That's all it's about until Dorothy, er I mean Ackmena, breaks out in song.

Somehow, in some illogical way, all of these sequences are supposed to connect to each other somehow, culminating in the arrival of Chewbacca on his home planet to finally celebrate Lifeday, but I don't see it. And for the topper, we're treated to Princess Leia singing a dreadful song during the Lifeday ceremony.

I have to give it to them, astoundingly they somehow got all of the original key players of Star Wars to do this. You have Mark Hamill, Harrison Ford, Carrie Fisher, Peter Mayhew, Anthony Daniels and recycled footage of  Darth Vader. They're all actually in this, including the animated sequence. My guess is they just didn't read the final script when they said yes to do it or it wasn't ready.
I struggled to watch this thing through to the end and I was so glad when it was all over, which was very difficult since it runs way too long at 97 minutes without commercials. The Star Wars Holiday Special is truly epic in it's weirdness and because of this, some people might enjoy it. Call me crazy, but  I sure as hell didn't.
Posted by robotGEEK at 6:13 PM