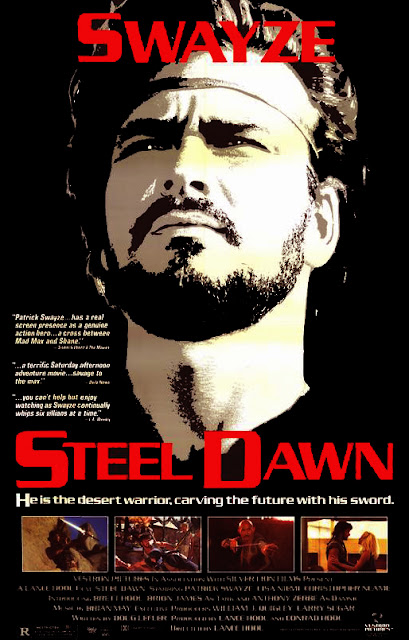 This "ho-hum" mid 80's offering from Missing in Action 2 director Lance Hool stars Patrick Swayze as a warrior with no name roaming the post apocalyptic wasteland when he stumbles upon a group of settlers looking for a day laborer to help on there farm. When other scavengers and settlers learn that this particular farm has the ability to produce fresh water, they will stop at nothing to seize control and claim this farm as there own and it's up to Patrick Swayze to stop them.

The only real high point of this film is that it stars Patrick Swayze as the nomad with no name and that it also costars the late great Brion James as the foreman of the farm who at first doesn't like the nomad, but ultimately befriends him. And that's really it on the plus side because this is such a lackluster effort on all fronts that even the frequent bouts of action and sword fighting that intercut between the long drawn out sequences of roaming the land and the "heartwarming" scenes where the nomad begins to care for the family at the farm can't save this uninspired mess.

The biggest problem is that there just isn't anything awesome about it at all. No awesome fights, no awesome gore and no awesome visuals. It's all very mediocre and though it could easily have been an Italian Trash film because it almost looks like one, the fact that director Lance Hool doesn't seem to possess any kind of visual style when it comes to directing prevents this from even reaching Trash or Exploitation level, which would have been a definite plus if it had. Everything just feels so stale that you can't help but wait till it's all over (if you even make it that far) so that you can move on to the next one.

Swayze is fine as the macho warrior with a heart of gold but a secret and deadly past. Brion James is pretty much great in whatever he's in and this is no different. I wish I could be as forgiving with the rest of the cast but nobody really stands out other than Swayze or James. Unless you count Arnold Vosloo (Hard Target, The Mummy) who stars as one of the main bad guy's henchman, only they dub his voice for some reason.

The big downer is that it's a competently made film, there's no denying that. It's just all so bland and uninteresting, even right down to the fights and action, that nothing short of a spectacular finale could save this thing, which unfortunately it does not possess. It's amazing to think that this came out the same year Swayze made Dirty Dancing. Two completely opposite types of films where one skyrocketed him to superstardom and one that easily could have ruined his career, but it didn't because as we all know he would go on to make one of the most badass manliest man movies ever made in the last 25 years called Roadhouse just 2 years later. Oh, and some little ghost story film a year later called Ghost.
Posted by robotGEEK at 3:45 PM