Review: More Brains! A Return to the Living Dead 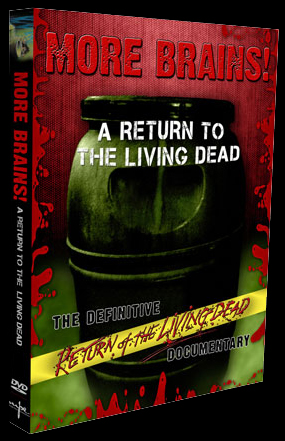 Not since 2010's Never Sleep Again on the Nightmare on Elm Street franchise have I been so completely consumed by a film franchise with such a riveting documentary. The second I heard this was getting released late last year, I pre-ordered mine without thinking twice. Many thanks to the great horror site Eat the deaD for keeping me updated on the status of this release and also to the great horror and VHS site Ghoulbasement.com for first turning me onto the fact that this thing even existed.

If you're a fan of Dan O'Bannon's 1985 opus The Return of the Living Dead or even any of it's lackluster sequels, you need to see this documentary. It's just brilliant and touches on everything you've always wanted to know and all of the things you didn't know that were going on behind he scenes. I had no idea how much of a troubled shoot this thing was. For me, it seemed to come out at a time when there was a lull in the quality of horror movies coming out. Sure there were some bright spots, like George Romero's Day of the Dead that same year and Friday the 13th: The Final Chapter the year before, but not many that really stood out. Then Dan O'Bannon did something unheard of and pretty damn brave. He made a full on zombie film, but infused it with some dark comedy elements (which work amazingly well and never going too far overboard), a frequently nude Linnea Quigley  and an in your face punk soundtrack that added an extra layer of awesomeness to an already awesome zombie film.

What made Return of the Living Dead such a landmark in the horror genre was that writer/director Dan O'Bannon didn't set out to make a flat out horror comedy. He keeps the horror elements in check and splashes it with just enough visual panache that though it's his first directorial effort, you'd never know it. The film looks bloody amazing.

More Brains! A Return to the Living Dead gives you a full 2 hours of insight into the production of the first film. All the way from it's conception when dealing with all the legal issues associated with the title since Romero and his writing partner from Night of the Living Dead John A. Russo, owned the rights to the "living dead" title and then became involved in a court battle over ownership when Russo decided he wanted to do a sort of unofficial semi-sequel, to it's theatrical release and reception. Russo won the court battle, paving the way for his semi-unofficial sequel called Return of the Living Dead, only to have Dan O'Bannon get on board and rewrite the script and make it something uniquely different. Then it delves into the intense drama regarding "everything" Return of the Living Dead in terms of makeup effects, casting and O'Bannon's infamous tyrant like behavior behind the camera. More than any other of the issues they touch on though, it's Dan O'Bannon, Clu Gulager and costar Jewel Shepard's "difficult" behavior that you find most fascinating. I honestly had no idea all of that stuff was going on and it's truly fascinating to see almost every single actor from the original film appear in the documentary with tales of the stressful situations put upon them during production and some of the stories they had to share about there costars. Really great stuff. You also get some great insight into why O'Bannon has only ever directed 2 films in his lustrous career with Return of the Living Dead and then 1992's Shatterbrain before giving up on directing  altogether.

The special features are just as awesome. Along with trailers, Dan O'Bannon's last interview before his untimely passing in 2009 and other goodies, you have separate but smaller documentaries on the WTF? and troubled Return of the Living Dead Part 2 and Brian Yuzna's Return of the Living Dead 3, which are just equally as fascinating. Especially in regards to Part 2, a film so bad I couldn't even finish it recently when I tried revisiting it after over a decade of not having seen it.You finally get deep insight into what the hell went wrong with Part 2 and why.

Overall a really, really great documentary on one of my absolute favorite zombie flicks of all time. They manage to give the documentary a really fun vibe, even when dealing with some of the more serious issues. And it's just always great seeing all the main players as well as the supporting cast over 25 years later.
Posted by robotGEEK at 11:36 AM

Email ThisBlogThis!Share to TwitterShare to FacebookShare to Pinterest
Labels: Dan O'Bannon, The Return of the Living Dead, zombies