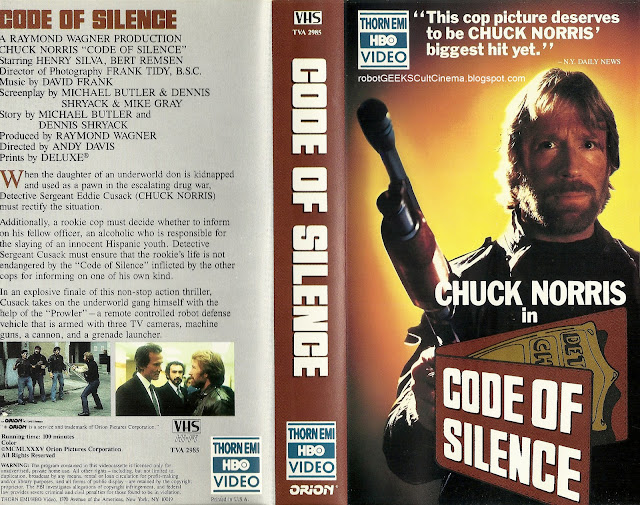 
Eddie Cusack's a good cop having a very bad day
While not as awesome as Chuck Norris's other 1985 feature Invasion USA, or director Andrew Davis's next film Above the Law with Steven Seagal, Code of Silence is entertaining on a gritty cop drama level and not on the all out 80's action film level, sadly. But it's still good and has it's moments as well as Norris being a total badass and not giving a shit about what anybody thinks. One of my biggest complaints though would have to be that with the exception of a scene where he's in a gym training or one scene in a bar when he begins to kick the ass of everyone inside, he really doesn't get a chance to show off any of his martial arts skills, which is odd since they make it a point to let the viewer know that he does possess these skills, yet for some reason felt the need to not include them in any part of the film, and a Chuck Norris film to boot. But he does get to talk a lot of shit, throw around a lot of attitude and deliver some really great one-liners.

Eddie Cusack (Chuck Norris) is an honest Chicago cop with a reputation for being a hard ass, no matter the consequences. A major drug bust spearheaded by Cusack goes awry after a gang of robbers headed by Tony Luna infiltrates the operation and kills taking there money and drugs. Only the head drug dealer didn't die and now his brother, played by the awesome Henry Silva, wants revenge and will stop at nothing to get it. Meanwhile, during this drug bust gone bad one of Cusack's men accidentally kills a kid who just happens to be at the wrong place at the wrong time, mistaking him for one of the drug dealers. He plants a gun on the dead kid to make the killing look justified and thus the dirty cops young partner is thrust into a "Code of Silence", which divides the cops of the precinct who honor that code against the young partner and his Sargent (Norris), who knows the dirty cop is up to no good.

I love me some good Chuck Norris, and after being somewhat let down by the missed opportunity that ultimately became Silent Rage, I felt I needed to seek out some other 80's Norris flicks to quench my love for the guy. Unlike a lot of Norris's other films around this time, Code of Silence plays it straight, never really straying to the outlandish like say, Invasion USA or Lonewolf McQuade, which really isn't a bad thing if you know that's the kind of film you're getting into. But if you're expecting a lot of action, then this one might leave you a little disappointed because it plays out more like a cop drama than anything with Norris showing a little more depth and emotion than usual. What saves the film is that it's really well structured and if you can look past the fact that there's not much action or Norris doing some martial arts then you can appreciate how well it's made.

Along for the ride is the great Henry Silva as the main bad guy Luis Comacho, much like he was in Davis's feature after this, Above the Law. And much like in that film, he's severely underused here. It's so frustrating too because he's so good at being the bad guy in films like Sharky's Machine, yet he only shows up for a minute at a time here and there and it's not until the very end where he's finally given some extended sequences, yet it still doesn't seem like enough. It would have been cool if it was more of a cat and mouse game between Norris and Silva, but the film slows down way too often to address the whole subplot involving the dirty cop who planted the gun on the dead kid and how his partner can't seem to cope with the fact that he knows this and has a hard time living with it and the whole "code of silence" thing. You also have Dennis Farina as Cusack's partner and a nice selection of recognizable character actors. Overall, the cast is pretty great.

One of the things I liked most about this is it's gritty realism, circa mid 80's Chicago. Much like he did in Above the Law a few years later, Andrew Davis seems to have a knack for giving the city a life of it's own, though one of my minor gripes would be he sways a little too much towards the hand held shots, but overall the film looks good. Though the use of reverse shots for several sequences was really odd and painfully noticeable. Like a scene where Cusack is in a car and reverses really fast and then does a 180 so that he can drive forward. Or a scene in the big showdown in the warehouse at the end where they use one shot, and then the same exact shot reversed a few minutes later. Weird.

Martin over at the excellent review site A Hero Never Dies recently did his own Code of Silence review about a month ago, which you can find here, where we pretty much feel the same about this one. It's well made, with Norris demonstrating a little more depth, but won't win over any new fans if you're not already a Chuck Norris fan. Ultimately, there's just not enough action or Henry Silva.
Posted by robotGEEK at 6:55 PM