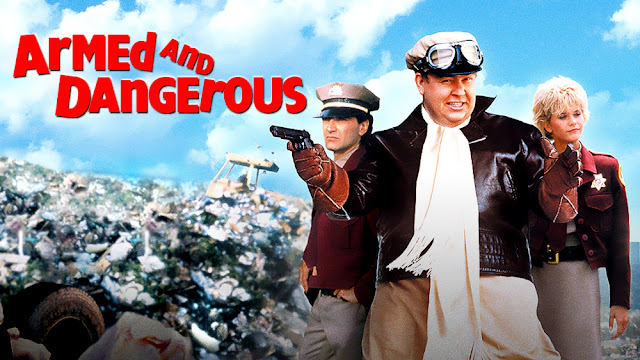 It's hard to believe that it's been decades since I've last seen this. And I don't remember too much about it really, other than the main cast and the sequence where they dress up in drag and bondage inside of an adult video store. But it's been a film I've had an itch to revisit for a while now, but never found the opportunity. That is until Crackle threw it on their streaming site for the month of July. So let's dig in.

After a former lawyer (Eugene Levy) and a former cop (John Candy) take jobs as security guards, they uncover a corrupt union that includes ripping off their own companies, taking bribes, and even murder. When their concerns are met with dismissive attitudes, they decide to blow the corruption wide open. 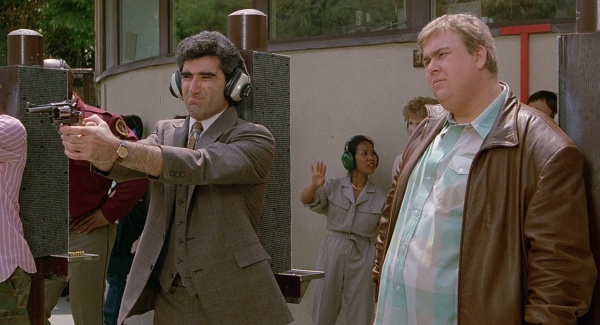 After finally revisiting it, I was struck by a number of things I found surprising. First, that it's a helluva lot funnier than I remember, and secondly, there's a lot more action than I was expecting. Let's start with the comedy. I was totally unaware that Harold Ramis had anything to do with this, but it shows that he has a story and screenplay credit, along with mega producer Brian Grazer, James Keach and Pj Torokvei (Real Genius, Back to School). I mean, all that talent just involved within the writing of this classic is impressive, and it's all translated brilliantly onto the screen because I laughed the entire time, from it's hilarious opening to it's action-packed climax. Yes indeed, Armed and Dangerous is a comedy gem that had me cracking up the entire time.

One of the things that surprised me was that this is directed by action maestro Mark L. Lester, a year after the Arnold classic Commando. So it sounds strange that after delivering arguably one of his best, most loved films in the action genre that he would dive into a comedy. But hey, Walter Hill did it roughly around the same time too with Brewster's Millions back in 1985 after a string of action classics that included 48 Hrs. and Streets of Fire. But what I found more surprising is how good he is at it here. I mean, the movie never skips a beat and it's genuinely hilarious for all the right reasons, so it's a surprising to me that he never did anymore comedies after this. At least none that I'm aware of since most of his films after this went straight to home video. Add to that the fact that he didn't direct a film for 4 more years until 1990's excellent cult classic Class of 1999, a sequel to his own breakout hit Class of 1984. He would then deliver a film of near legendary status the following year in 1991 with the Dolph Lundgren/Brandon Lee action classic Showdown in Little Tokyo. Anyway, I'm veering off course here. John Candy was on such a winning streak here. Coming off of comedy classics such as Splash, Summer Rental and Volunteers, he would follow this up with his cameo in the genius musical adaptation of Little Shop of Horrors and then Spaceballs and Planes, Trains & Automobiles. Eugene Levy, who costarred with Candy in Splash, was an SCTV regular who primarily stuck to television work before and after this for the most part. But overall A&D is filled to the brim with such an impressive cast that it's hard to know where to begin. We have the adorable Meg Ryan (Innerspace) of course, and then there's Kenneth McMillan (Dune) who plays her father, but we also have a who's who of character actors all making notable and memorable appearances throughout such as the legendary Brion James (Blade Runner) and Jonathan Banks (Breaking Bad) as two of the heavy-handed union reps, Robert Loggia (Innocent Blood), Larry Hankin, Steve Railsback and Tiny Liston, Jr. just to name a few. This cast was incredibly entertaining all around.

Having an expert action director comes in handy quite often in here because A&D has a surprisingly large amount of action sequences. While most of it is played for laughs, it doesn't take away from the fact that the action is seriously badass in here. That last third act though is damn impressive with some killer action and stuntwork for sure. 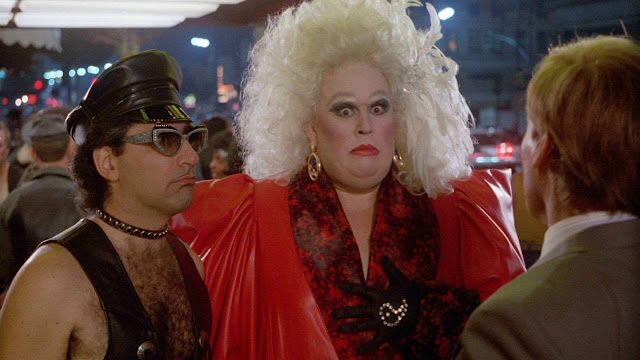 Armed and Dangerous exceeded my expectations at every turn. It's hilarious, fun, and carries a large amount of action to satisfy any action fan. John Candy and Eugene Levy are in top form and honestly, make a great team. While they costarred together in a number of things before this, I'm surprised it didn't continue considering this is easily their best collaboration.

You can currently watch it for FREE on Crackle.com, or rent it for a few bucks on Amazon. There's a 2011 Blu Ray you can pick up for roughly $10, and the DVD for even cheaper.
Posted by robotGEEK at 12:54 PM