Let me start off by saying I had high hopes for this one in two opposite directions. Either it could have been a great Die Hard on a plane style action/thriller, or it could have been a really great So Bad, It's Good romp with an over the top Ray Liotta being Ray Liotta. I'm sad to say that it kind of sort of falls in line between the two, never going far enough on either side

First off, if you love crazy Ray Liotta, then this movie is for you. Here he is an unhinged beast and literally the only thing that makes the film worth watching. While it's actually not bad, and quite good in some areas, you can't help but feel that it could have been a pretty great Bad Movie Night classic if they had just decided to dive head-on into cheese. Seriously, had they given it just a little bit more oomph in the cheese department, this would have been a certified Bad Movie Night classic! No doubt. But what we ultimately have here is a film that kind of teeters on that very special type of film, but never far enough. It's a competently made film, with some surprisingly impressive effects work and decent cast that easily could have made it an enjoyable 90's action/thriller, but what we're left with is a film that doesn't know whether to be a good action/thriller, or an unintentionally hilarious, but highly enjoyable cheese-fest. 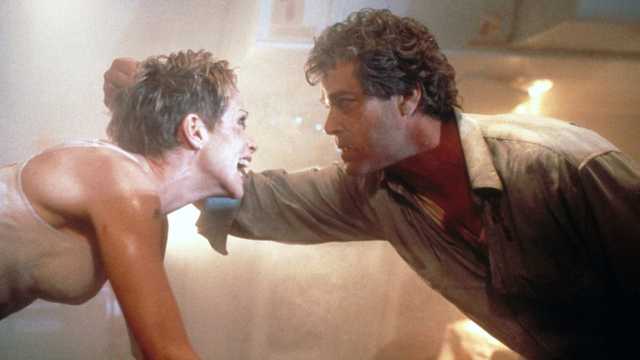 For his part, Liotta is a blast to watch. In the first act, he plays calm, cool and even a bit charismatic, making you believe he's not such a bad guy after all. But it doesn't take long for his true colors to shine, and boy does he let loose in easily his most "Nic Cage-y" performance. It's easy to see he's having a blast here, and it's kind of scary how intense and good he is here in the role. Lauren Holly does a fine job as the protagonist, a stewardess who must outwit Liotta's serial killer character as well as try to land the plane solo. But I think the real standout here, or rather the most likable, is Ben Cross as a pilot who guides Holly's character over the radio on how to fly and land the plane safely. He's actually a very good and likable actor, and outside of his notable role in Dark Shadows, never really hit it big the way he should have.

Turbulence is an easy time-waster, and I can guarantee you that you won't be disappointed. While it never quite goes as far as it could, it's a hoot to see simply for Ray Liotta giving his most over the top performance to date.
Posted by robotGEEK at 9:29 AM