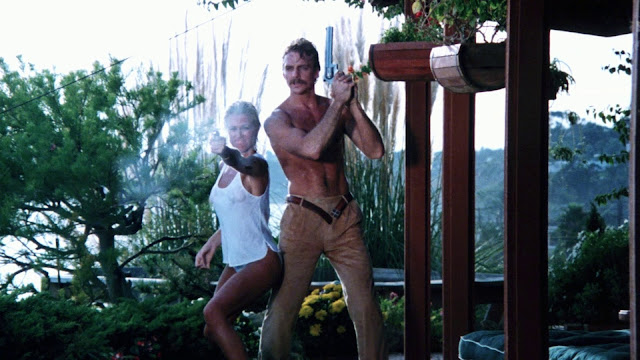 Excessive Nudity, Juvenile Script, and Mediocre Action. What More Could You Ask For?

As much as I love bad movies, I have to admit that I haven't really dug into legendary B-Movie filmmaker Andy Sidaris' filmography all that much. I think up until this point, I've only ever seen the excellent Seven (1979) and the Bad Movie Night masterpiece Hard Ticket to Hawaii (1987). Before this, he hadn't directed a film since Seven in '79, taking a 6 year break from filmmaking. But after this film, he pretty much made and released a film a year all the way through 1993's Fit to Kill. It seems that beginning with this film, he found his little niche, or stride, and just kept belting them out left and right. Whether that's a good thing or not depends on your taste in bad films, but one thing's for certain, his films are definitely entertaining.

Malibu Express tells the tale of a smooth talking Texas private eye named Cody Abilene. I mention that he's from Texas because they throw that in your face as often as possible. In fact, his characterization of a Texan is so over the top that it actually falls into a caricature territory. I'm from Texas, I would know. He's hired to infiltrate a rich and powerful family to see which one of them has been leaking high tech secrets to the Russians. 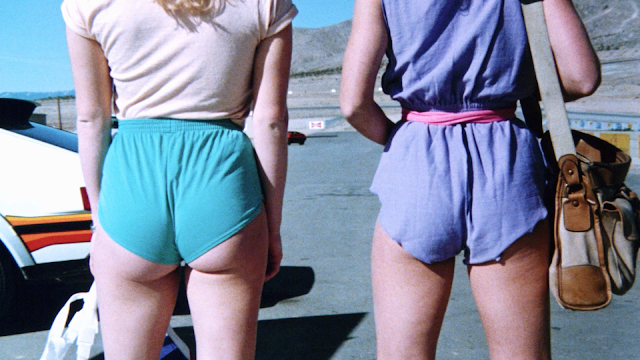 Really, that's the bones of the story. Much like Sidaris' previous film Seven, it gets way too complicated and convoluted for it's own good, when really all we want to see is a bunch of random nudity and poorly executed action. Oh, and plenty of unintentional hilarity. Thankfully this film possesses all of those things so the over-complicated plot doesn't take away from your enjoyment too much. I think it started to sink in with Sidaris because ultimately, the main character, Cody Abilene, has to narrate the film to tell us what's going on.

I should point out that Malibu Express is strange. There are so many odd things that happen that don't make a lick of sense, but surely adds to the films overall appeal. There are too many to make an actual list, but believe me you'll be scratching your head a whole lot during the film. At it's heart, it looks and feels like a film written by a horny 13 year old boy. I'm not even joking. The dialogue is so juvenile and unintentionally hilarious that you just have to assume that Andy Sidaris must have written this film when he was a preteen. But again, that only adds to the film's appeal. On the downside though, this is sadly not Sidaris firing on all cylinders. Whereas I just love his more stricter and professional tone in Seven, and his more polished work in Hard Ticket to Hawaii, Malibu Express seems to be a decline in quality all around, from the direction, certainly the writing, editing and acting. I should also point out that while there are plenty of moments that take place elsewhere, most of the film takes place within a house, coming off as sort of a "Clue"-style thriller as he tries to figure out who's killing who. 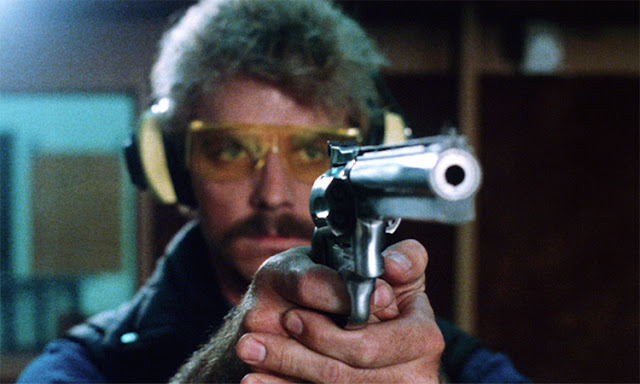 As per usual, Sidaris shows up in a cameo as an RV tourist but he's so annoyingly over the top it's cringe-inducing to watch. It's also surprising to learn this was released in 1985, when it looks and feels more like a film shot and released in the mid 70's. There's also an ongoing gag about a hillbilly family of 3 who keep trying to challenge Cody to a car race throughout the film. I mean, these scenes are awful and such an unpleasant chore to sit through. It wouldn't be so bad if it was just once or twice, but they keep showing up over and over and it got old really fast.

While the cast is a collection of non-actors, most likely Playboy models, there are a few bright spots, like the legendary Sybil Danning, who always brings a breath of fresh air every time she shows up on screen. Also, you'll get a kick out of a pre-Police Academy 2's Lt. Mauser showing up here as a thug. 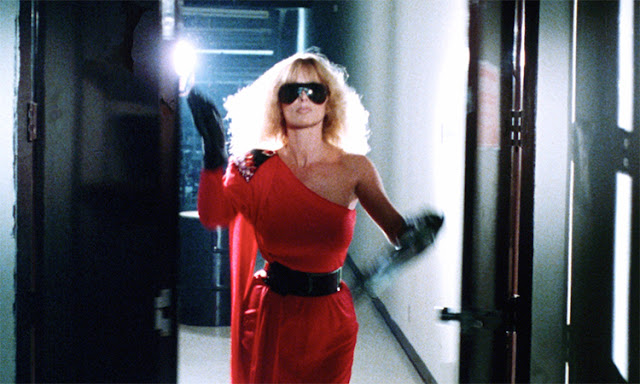 While I wouldn't say it reaches the level of some of Andy's best known and loved films, its certainly got enough going for it to make it enjoyable for any Bad Movie Night. I actually had this in my collection for years as part of that cheap 12-Movie set "Girls, Guns & G-Strings: The Andy Sidaris Collection", but never got around to watching it. When Mill Creek recently began releasing his classics on Blu Ray, I couldn't pass up the very low price of $8 for this, which you can still do on Amazon for that price I believe.
Posted by robotGEEK at 1:25 PM