What do you get when you mix a horror film, a 90's martial arts action film, and a historical film? Hellbound!!! 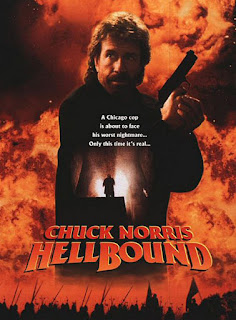 Chuck reunites with his longtime collaborator and brother Aaron for one of their more unique collaborations in this horror/action/historical mashup. As weird as that sounds, it's actually pretty well done for the most part. While it won't go down as one of their best efforts (it might be too weird for some people), it certainly has enough going for it to give it a watch. It doesn't exactly reach Bad Movie Night levels of fun, but seeing how everyone does it all with a straight face is enjoyable enough.

Norris plays Frank Shatter, a Chicago cop who along with his partner Levels, investigate the murder of a Rabbi, which leads them down a wormhole of the supernatural and someone who may or may not be the devil. Their investigation takes them all the way to Israel where they uncover the sadistic plot of the mysterious character known as Lockley, and his plans to....well just watch the movie to see for yourself.

I think one of the more surprising elements for me here was how good it looked right from beginning. There's no denying my love and appreciation for Aaron Norris as a director. I wasn't much of a fan of his for the majority of my years but have since grown to appreciate his very specific type of filmmaking in my older age. To put it bluntly, I found him to be a very boring and bland director. No style or pizzazz. Yet when I look back on his films today, I see how wrong I really was. While he never really possessed a definable style, his trademark no-frills approach actually helps elevate the material in more ways than you would think. It's no high class work of art, but it's not trying to be either and services the material really well. 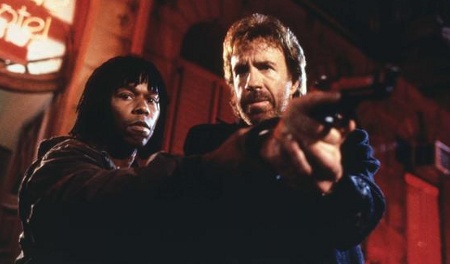 It was kind of weird seeing Norris paired with a partner for the entire film. I mean, it's not the first time he's done it, but when you're so used to seeing him play the solo lead, it was a bit surreal seeing him share nearly every single frame with his Chicago cop partner Jackson, played Calvin Levels, who I mostly remember as the car thief from Adventures in Babysitting, but also recently saw in John Badham's Point of No Return. Levels does a good enough job here, but doesn't come away from the experience as anything more than a sidekick. And that's not his fault, it's just the way the material was written. We know literally nothing about him, other than being Shatter's partner who occasionally cracks wiseass jokes, so why bother caring for his character? 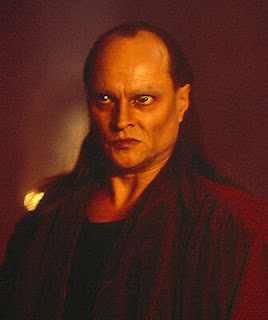 While not all the engaging in general to be honest, one of the reasons to see this through to the end is the villain devilishly played by Christopher Neame, who chews up the scenery with such glorious gusto that he makes the experience so much more fun.

It's all a bit silly, but so what? You have to admire everyone's conviction in trying something surprisingly different. It won't end up being one of your favorite Norris, or Cannon Films for that matter, but it's a fun time overall regardless. Those expecting to see some classic Chuck Norris fighting will be disappointed as there's really none at all, except for the final fight when he and his partner face down with Lockley aka The Devil. Mostly just a lot of kicking but at least it's something.

Much like some of Chuck's 90's films for Cannon, this one has never been released in widescreen, which is a shame because it does have some impressive eye candy here and there. I settled for Laserdisc rather than VHS because it's a slight step up in quality, but it could still use an upgraded and cleaned up release and in it's proper aspect ratio, as does The Hitman, another Norris/Norris collaboration with Cannon back in 1991 that still hasn't gotten a decent release.
Posted by robotGEEK at 12:56 PM