Being as Tony Scott has and always will be one of my all-time favorite directors, I'm shocked I never took the time to watch this until now. And I don't even have an explanation. I guess I just really wasn't into thrillers back then, whereas today I'm all about them, especially from the 80's and 90's. When this popped back onto my radar recently I grabbed the cheap Blu Ray and took a nosedive into one of the most intense, most well-crafted thrillers I've ever seen.

At this very particular time in his career, Tony Scott was on a roll; a creative winning streak if you will, with classics such as the grossly overlooked gem Revenge (1990), the excellent Shane Black-penned action/comedy The Last Boy Scout (1991), the Tarantino-penned True Romance (1993), and now this excellent submarine thriller from 1995. The guy was delivering top-quality cinema at a breakneck pace and this film is no exception. It's easily one of the best thrillers I've ever seen that demonstrates a professional craftsmanship that you just don't see very much of. Considering that most of the film takes place within the confines of a submarine, you would think that his ability to create interesting and dynamic camera setups would have been hindered, but that's not the case at all here. Somehow he was able to make this film just as visually lush as any of his best films, and that was just one of this films many surprises for me. 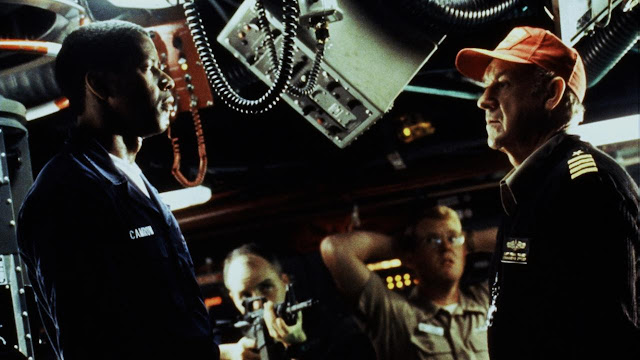 Filled to the brim with an insanely impressive cast of then up and comers like James Gandolfini, Viggo Mortensen, Steve Zahn, Danny Nucci, the surprisingly large cast was a constant rotation of surprises at every turn. And then there's of course,Denzel and Hackman. These two titans of pure raw intensity delivery some of the best work in both their respective careers and every second they were on screen together made for amazing cinema, and delivery hands-down some of their finest work. The sheer intensity that Hackman can produce with something as simple as a stare is so impressive, while Denzel, who also released the excellent cult classic Virtuosity the same year, was riding high after a wave of critically acclaimed roles such as Philadelphia and The Pelican Brief and Malcolm X.

Whenever I bring this film up, most peoples first comment is that people feel the need to let me know about that Quentin Tarantino wrote the conversation about The Silver Surfer. But the truth is that quite a number of other notable screenwriters helped punch up the script here and there, such as Robert Towne, Steve Zaillian and of course, QT. I will say though that that Silver Surfer conversation does stand out because it's so drastically different from any other conversation in the film and also pretty funny. 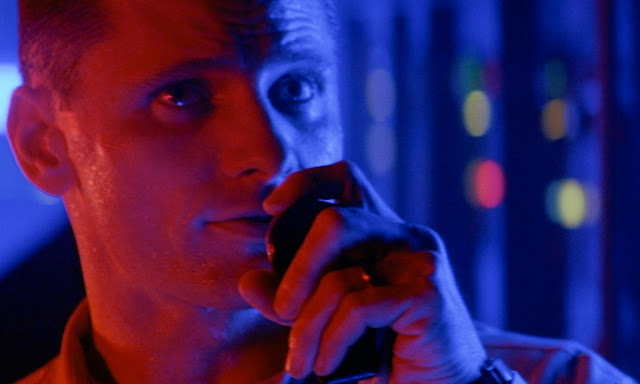 Crimson Tide was a breath of fresh air. A totally immersive slice of expert filmmaking from one of the most underrated directors working in the 80's and 90's, full of insane amounts of tension, intensity and a pace that never lets up for a second, leaving you pretty exhausted by the end. It quite literally and easily became one of my new favorite Tony Scott films, and one of my new favorite thrillers. Scott really was one of the most original filmmakers that ever lived, delivering a very specific visual aesthetic that nobody has ever been able to reproduce. It's a shame he's no longer with us, but his legacy will live on. He deserves that.

This excellent thriller is available on a very affordable Blu Ray for roughly $5. No extras but the picture quality is pretty impressive.
Posted by robotGEEK at 12:59 PM