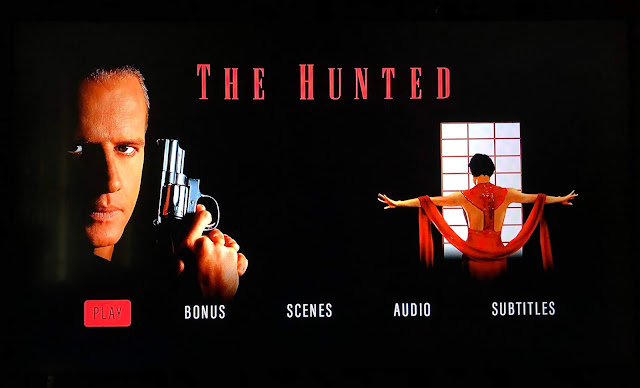 A Forgotten Ninja/Thriller Masterpiece Finally Gets It's Due

I have a funny history regarding this movie. I remember actually buying tickets to see it in theaters way back in 1995, but I didn't actually watch it. Instead I used the time to make out with my then-girlfriend for the next 2 hours and it was awesome. I feel my 19 year old self made the right call, but if that same situation were to happen to me again today at 43, I would definitely choose to watch the movie instead. When Shout! Factory released this recently on Blu Ray for the first time, it was just the excuse I needed to finally watch it, and what better way than in the best presentation possible? Let's dig in.

Right off the bat I got strong vibes reminiscent of Ridley Scott's brilliant masterpiece Black Rain and I will say that this did not disappoint. In fact, it was better than I expected and I feel a fool for waiting so long to finally see it. While it's always been on my radar, it's never been one I heard enough about to make the effort to actually seek out. Yet when I talk about it today, every single person who has seen it says they absolutely love it. So while it came and went with zero attention back in 1995, it's since become a true cult classic and an essential entry in the "ninja/thriller" genre. 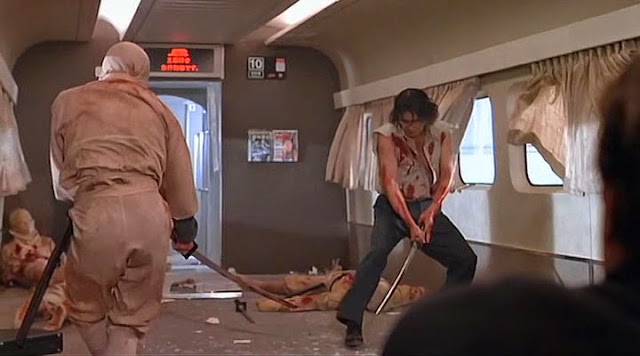 Written and directed by J. F. Lawton, who wrote Under Siege, Chain Reaction and surprisingly, Pretty Woman, The Hunted is an excellent 90's action/thriller about a business man (Christopher Lambert), in Japan on a business trip who gets caught up in a centuries long feud after witnessing the murder of a high class prostitute by Japan's most lethal ninja. Soon he is being hunted by this ninja and his clan with only the help of a local dojo instructor and his sympathetic wife.

One of the best things this film has going for it is a strong attention to detail from writer/director Lawton. The film is a beauty to look at, with some very impressive images found throughout, and when it comes to the action scenes, they are just as good as you had hoped, if not better. When I started posting about acquiring this film recently on my Instagram, most peoples first comment was that the train sequences was massively badass and that it will blow me away. I've seen a ton of action films (after all, it's my favorite genre), and that is a mighty proclamation. But they were right, because holy shit. Wow. I did not see that coming and it's hands-down the crowning achievement of this 90's forgotten gem. I won't go into detail, but trust me, you'll be impressed.

One thing you might find interesting, because I certainly did, is that though Christopher Lambert is the star here, he really doesn't do much other than run for his life, hence the title The Hunted. I have to say that the real standout and badass here is Yoshio Harada, who plays Takeda Sensei, a dojo instructor who agrees to help the police with identifying the famed and lethal/mysterious ninja Kinjo (John Lone), who also has a secret past connected to this legendary ninja. Man, he was just so fucking spectacular in this as a no nonsense badass who lives by the samurai code and uses his own secret agenda to finally get to Kinjo. While he may come off as a pretty despicable human being, his performance in the above-mentioned train sequence will have you rooting for him.

This is exactly the kind of film experience I hope for when sitting down to enjoy a first-time-watch of a forgotten 80's/90's classic that I hadn't seen before. Entertaining is an understatement here. The Hunted was refreshing, intelligent, brutal, stunning and a true gem within both the 90's action/thriller genre as well as the ninja genre. Do yourself a favor and grab this gem ASAP.

The Blu Ray via Shout! Factory: 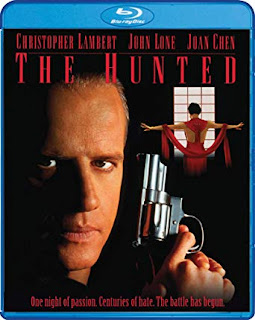 Shout! just recently released this in a brand spanking new Blu Ray that marks the best presentation of this hidden gem possible. As far as the new 1080p transfer goes, its not mind-blowing, but is a huge upgrade from the previous DVD from way back in 1998. The blacks are dark, the colors pop and the sharpness is impressive. There is a bit of grain found throughout, but I actually like that about it. It was a film shot on actual film so I know what to expect sometimes with these older releases. Still, I can already see people complaining about it. But trust me, it's not a big deal.

The best part of this is that you get the Workprint version included in the special features section that features extended and deleted scenes not found in the theatrical cut. The only downside is that this version is presented in Standard Definition. Rounding out the extras are a commentary by writer/director J.F. Lawton, Deleted Scenes, Theatrical Trailer, Behind the Scenes "On Location" stuff and graphic elements footage.

All in all it's a really great release for a film that most people have forgotten about. It's begging for a rediscovery, or to be discovered for the first time because it's such a great one and the $20 price point for this new blu is an excellent way to dig into this at a decent price.
Posted by robotGEEK at 11:44 AM