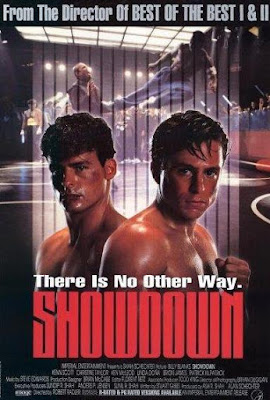 Back in the 90's I was a huge fan of this kind of film. King of the Kickboxers, Blackbelt, Best of the Best and all of the Bloodfist movies were a staple in my house, which is why I'm shocked I never knew this particular one existed. Throw in the fact that it's directed by Robert Radler, the director of the first two Best of the Best films, and I'm just floored that this one somehow passed me by.

Let me start by saying that I had high hopes for this one simply because Radler is a pretty solid director of these kinds of films, but holy shit this was cheesy as fuck. Showdown is literally a play by play remake of The Karate Kid, just nowhere near as dramatic or good. But I've got to give the writer and director credit for having the balls for even acknowledging the Karate Kid connection through a lame cheesy joke in the film. So maybe they were all in on the joke after all? Because ultimately, this is a really tired and lame "After School Special" kind of take on The Karate Kid.

The fact that this was directed the same year as Radler's cult classic Best of the Best 2 blows my mind because BotB2 is hands-down one of the best sequels ever made and a perfect example of how you can take the bones of the first film and amp it up to 11 effectively. Yet, somehow here, he really delivers quality on the complete opposite side of the spectrum. Whereas BotB2 was professional (I still can't believe it didn't get a theatrical release) with highly impressive fight scenes, action scenes and even dramatic moments here and there, along with all the things that great sequels add to the table, but this was something completely different. 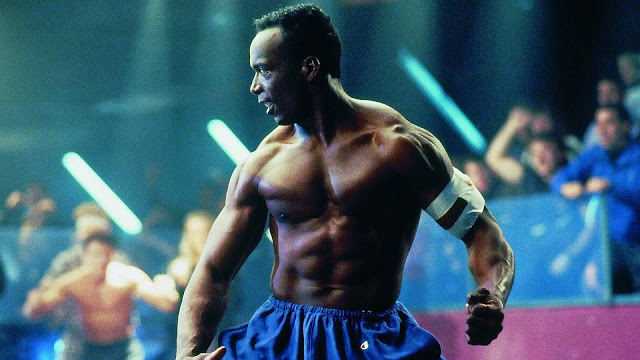 You would never know the same director released these two films the same exact year, but he did. One is polished, while the other one is shockingly amateurish and I just can't get over it. While I wasn't expecting a masterpiece, I certainly wasn't expecting this. It's a good thing that it's not a total loss and does offer some solid brownie points.

For starters, the lead, Kenn Scott (Raphael in TMNT II: The Secret of the Ooze) isn't a bad actor at all. He handles the role of "new high school kid" well enough and same goes for his fighting scenes. Billy Blanks plays the Mr. Miyagi role to great effect and when it comes to his fighting scenes, he delivers the goods. We also get Patrick Kilpatrick, in all his over the top glory, as the main villain really hamming it up here. And the legendary Brion James shows up for comedic effect as the aloof and out of touch Vice Principal of this crime-infested high school who shows up in random interludes to make a snarky joke to a student and that is literally all he does here. He probably filmed all of his scenes in a single day. 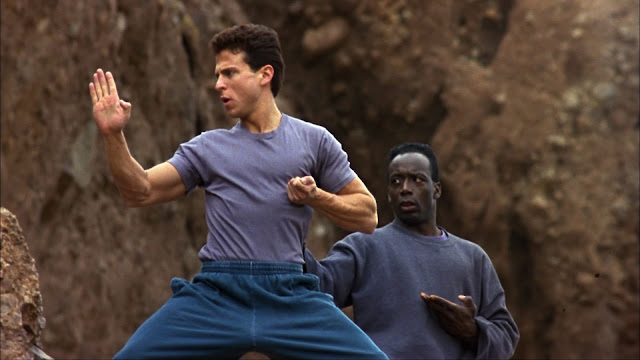 Showdown is 100% pure cheese, some good and some bad. The good cheese helps us get over the bad cheese for the most part, but gosh there is so much to dislike here overall. The worst thing is that the film is very dumbed down to the point that it's infuriating. I mean, there were so many moments that I rolled my eyes or just flat out yelled at the tv screen, and not in the "oh my gawd I can't believe they just did that, that's hilarious!" kind of way. It's more of a "How old was the guy who wrote this?". The endless cliche's, like the new kid being warned over and over and over again not to talk to the hot girl because her boyfriend will literally kill you and constantly blowing off the warnings even though he's literally gotten the shit beat out of him already because of it, will drive you mad.

Despite my gripes, it's not a total loss. It's worth a watch for sure and does offer up some nice 90's nostalgia when everyone wore clothes 5 sizes too big and had really weird haircuts, and seeing Patrick Kilpatrick in one of his most over the top performances ever make it watchable. The soundtrack is sadly laughably lame, where I think they literally only use 2 cheesy soft rock songs for the entire film, and doesn't do anything to give the film a harder edge. In fact it does the complete opposite.

This recently got a snazzy new Blu Ray release via the excellent label MVD Rewind Collection. I was on the fence about picking it up, knowing it was also on Amazon Prime. Lets just say I'm glad I didn't fork over the cash for the Blu Ray. It's a shame, because this really could have been pretty awesome. All the right ingredients are here, but it's just all put together so sloppily.