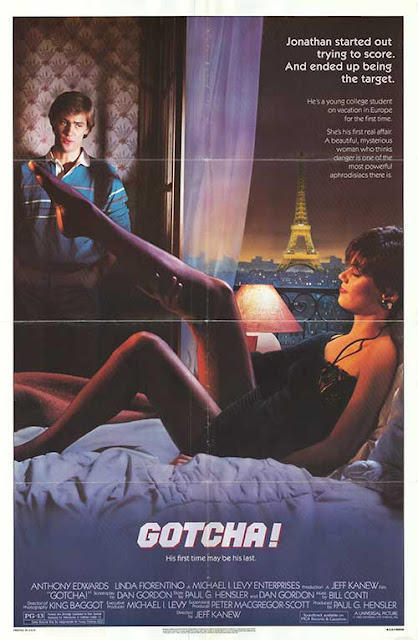 Guess What? Gotcha! is not a comedy

Gotcha! is a film I vividly recall seeing on my local video store shelves quite often back in the 80's. Yet, as often as I would frequent those stores, I never actually rented this one. And I don't recall ever seeing it land on HBO or Cinemax back in the day either, which is how I normally would have seen it if I didn't rent it on VHS. But I've always been aware of this film, even if nothing about it necessarily stood out to me and actually made me want to rent it.

When I recently revisited the 90's Wesley Snipes "Die Hard on a plane" actioner Passenger 57, I decided to look up what the writer and director had also done, and discovered that Dan Gordon not only wrote Passenger 57, but also this little-mentioned 80's classic Gotcha!. I was intrigued enough by that odd little connection to Passenger 57 to finally seek this out, so let's dig in. 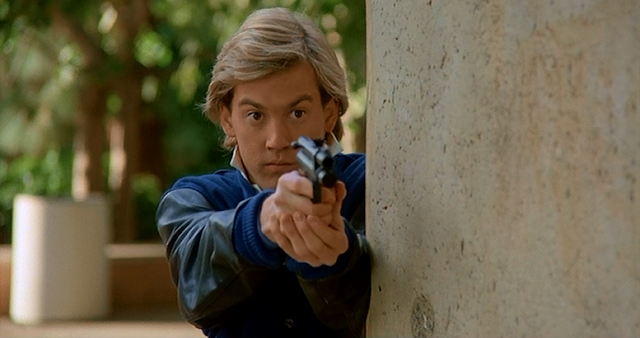 I have to be honest, this was quite the pleasant surprise for more reasons than one. For starters, I fully expected this to be an 80's comedy. But this is not an 80's comedy. While it does begin as one, it quickly morphs into a pretty great espionage thriller that, while not nearly as great or unique, reminded me a lot of the excellent Miracle Mile, another thriller starring Anthony Edwards. Yet that doesn't take away from the sheer enjoyment of this, because while it may not be all that original, it carefully hits all the right notes in delivering a solid Cat & Mouse thriller that takes us through the streets of France, East Germany and back home to the United States.

I think I half-expected this to be a comedy about paint ball games, which isn't all that difficult to believe since that is what it seemed to be advertised as.....to me anyway. But the reality is that this is a pretty effective thriller where our protagonist Jonathan (Anthony Edwards), goes to France on a school trip, where he meets a beautiful woman named Sasha (Linda Fiorintino), and the two seemingly fall mad in love. He then follows her to East Germany for a "job" she has to do, which involves picking up and delivering an item. They soon get separated in Germany and Jonathan is being hunted by a group of crazed German hitmen and he has no idea why. Once he discovers that, unbeknownst to him, Sasha has hidden a top secret roll of film in his backpack, his idealistic fantasy, and most importantly, his relationship with Sasha, begins to unravel and all may not be what it seems. When he returns to America, the hitmen are still hot on his trail, as well as the CIA, and Jonathan uses his paint ball game knowledge to help fend them off and uncover the truth. 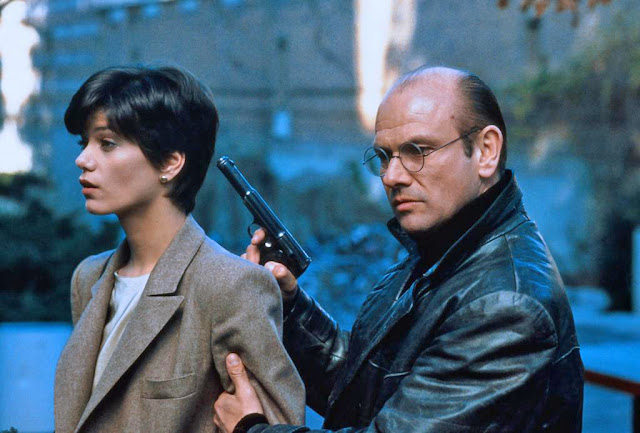 The mounting tension, chase sequences, foreign locales and strong performances, most notably by Edwards and a gorgeous Linda Fiorintino, all elevate the material to something far more potent than you expect. Even when the film attempts a more light tone here and there, it's never too much to sway it from it's strong "thriller" vibe, and that's a good thing, because above all else, Gotcha!, believe it or not, is a surprisingly great espionage thriller.

I think one of the more surprising aspects of this is that it comes courtesy of Revenge of the Nerds director Jeff Kanew, who's mainly stuck to comedy in his career, having directed other comedy classics such as Tough Guys, Troop Beverly Hills and V.I. Warchowski. So the fact that he delivered this film in such a polished way in the chase-thriller genre kind of had me floored. Too bad he didn't continue to explore this genre more in his career. 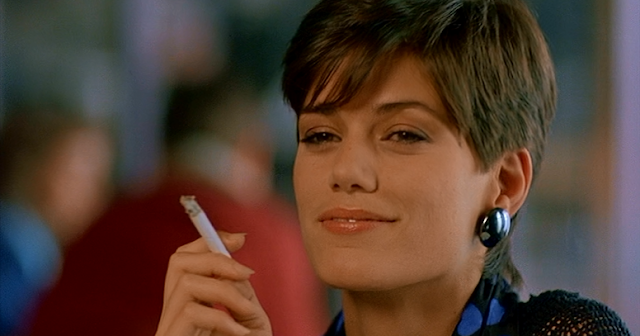 I'm not saying this is one of the best thrillers ever made, but it damn sure is a helluva great one that delivers the goods consistently and keeps you invested throughout. The fact that it's a thriller at all and not a comedy like I assumed may be why I enjoyed it so much, but that doesn't mean it's not effective. Give it a shot, I think you'll be just as surprised as I was with how great it is.

Posted by robotGEEK at 1:49 PM