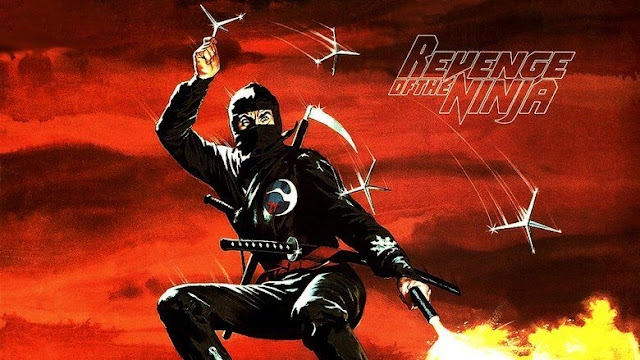 Next to Sho Kosugi's 'Pray For Death', This May Very Well Be The Ultimate Ninja Film

As I enjoy my current love for 80's ninja flicks (which I've ignored for far too long), I took this opportunity to finally grab the Blu-Ray courtesy of Kino Lorber of one of my favorite ninja flicks of all time. Though it has been a good 3-4 years since I've last seen it, I remember it being cheesy as hell (always a good thing), and just very fun. Plus, you can never have enough Sho Kosugi. Being that he didn't really make that many films to begin with before retiring, it's always a good idea to revisit his classics, which honestly only get better and better with age. So let's dig in.

Written by James R. Silke (Ninja III, The Barbarians), and directed with gusto by the legendary, and Cannon regular, Sam Firstenberg (Breakin' 2, Ninja III, Avenging Force, American Ninja), Revenge of the Ninja may actually be my favorite ninja film. I know, I know. I just said that recently about Sho Kosugi's Pray for Death in that film's Blu-Ray review, but after having revisited this one, I'm hard pressed to pick a favorite now, as they both tap into that very niche "cheesy" angle that some of these ninja films seemed to miss. Of course all of that is completely unintentional, but captured so gloriously by Sam Firstenberg.

There's just so much to enjoy here. Sho Kosugi displays such an intense amount of showmanship, always going above and beyond to put on a show. His facial expressions alone make it enjoyable, but the film is littered with a fun cast of characters that leave you both dumbfounded and entertained. The weird Village People style "gang" Sho encounters in a playground is a perfect example of that. But it's everyone's fierce commitment and steadfast approach that drives the film forward in the most entertaining way. Everyone is 100% serious, yet the material is amateurish and oftentimes laughably silly, which makes for such a fun experience. 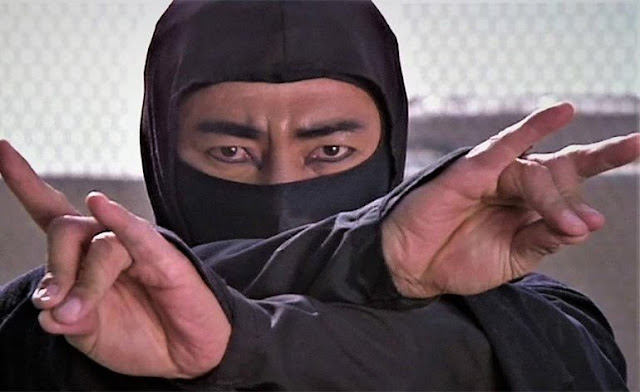 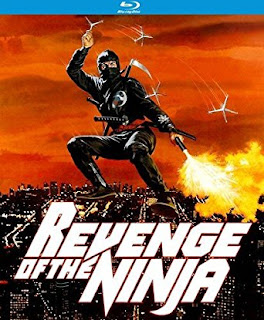 Just The Disc:
Presented in it's original aspect ratio of 1.85:1, there's nothing really special about this release, other than how awesome the movie is in general. While the new 1080p HD transfer is nice, it's not mind-bogglingly impressive or anything. Still, to date, it's the best looking transfer we have of a pretty legendary film. Slight graininess (it was made in 1983 after all) can be found throughout, but only adds to it's charm. It's a pleasant reminder of a time when movies were actually shot on film. Most importantly though, the colors pop, and it's vivid early 80's color scheme add yet another layer of retro cool atmosphere to an already fantastic film.

The new DTS-HD master audio 2.0 is nice, but the lack of subtitles was a bit surprising to be honest. I did find myself having to really focus on the audio because of this, which depending on your audio setup, could actually be a bit of a bother, which is why subtitles are always nice to fall back on, which are lacking here.

Much like most of Kino's releases, there are virtually no extras, save for a trailer, commentary by director Sam Firstenberg and stunt coordinator Steven Lambert, and an intro by Firstenberg that lasts a total of 3 minutes and 16 seconds. A new interview with Sho Kosugi (who's always down for things like that) would have been nice, or even a short "Making Of". Kino really needs to start stepping up their game in the extras department. 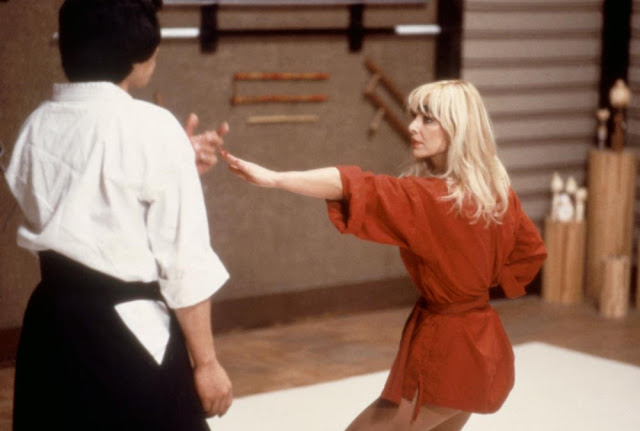 It may not be everyone's cup of tea since it's unintentionally cheesy in the most epic way, but if you just give it a chance, you'll see that it's quite possibly one of the best ninja films ever made, in a way that makes you feel like a kid again. It's absurd in the most delightful way. When the insane fight sequences take center stage, it's astonishing how they literally just throw anything they can think of into them, with no attention or care taken to logic and common sense. But that's why it's such a blast!

Personally speaking, if you love 80's films, Bad Movie Night films, ninja films, Cannon Films, Sho Kosugi films, or just cheesy films, this is a Must-Own. No question. It deserves to be in your collection along with the best of them and if time is any indication, there's a very good reason why we're still discussing this film 35 years later. It's just fucking awesome.

Kino Lorber's Revenge of the Ninja Blu-Ray is available from any of your favorite online retailers.