Holy shit. Where do I even start? On Deadly Ground is the only film from his Golden Era that I have avoided from the start. I've never seen it, because it just never looked all that interesting to me, even though I literally grew up on his films. But boy what a huge mistake that was, because having finally seen it for the first time at the ripe old age of 42, I can say that it was a blast from start to finish. But not for the reasons you may think.

On Deadly Ground is a masterpiece of self-indulgence. It's hands-down one of the biggest vanity projects I've ever seen on film, and it's all thanks to Steven Seagal, who literally makes himself out to be a mythical superhero in this film, to laughable results. Having been the director on this, I'm sure you can already imagine the standard mythical hero/secretive badass tropes run rampant in here, and they do, only they're dialed up to fucking 11 and it's hilariously epic.

First and foremost, On Deadly Ground is an environmental movie about a greedy Texas oil tycoon named Jennings (Michael Caine???), who is hellbent on moving forward with the planned installment of a new oil rig in Alaska, even though the equipment is faulty and will leak millions of gallons of oil into the ocean, causing insurmountable damage to the environment. Enter Forrest Taft, an environmental agent who, not surprisingly, is somehow also a secret DEA, FBI, EPA, NSA, IPA (get it?), CIA, and the list goes on and on. It's literally an insane smorgasbord of government credentials that never seem to end, with the topper being a moment in the film when the legendary R. Lee Ermey was talking about Forrest to another character and dotes this wonderful line of dialogue:
"My guy in D.C. tells me that we are not dealing with a student here, we're dealing with the Professor. Any time the military has an operation that can't fail, they call this guy in to train the troops, OK? He's the kind of guy that would drink a gallon of gasoline so he could piss in your campfire! You could drop this guy off at the Arctic Circle wearing a pair of bikini underwear, without his toothbrush, and tomorrow afternoon he's going to show up at your pool side with a million dollar smile and fist full of pesos. This guy's a professional, you got me? If he reaches this rig, we're all gonna be nothing but a big goddamned hole right in the middle of Alaska. So let's go find him and kill him and get rid of the son of a bitch!"

Tell me that's not the funniest shit you've ever heard! And this film is filled to the brim with this kind of ridiculous nonsense in trying way too hard to make Forrest Taft appear indestructible, or a badass. And in reality, all this movie does is make him more of a cartoon character and look the most ridiculous that he's ever looked, starting with his fringe-laced oversized ethnic jackets that he sports continuously throughout the film. There are also unintentionally laughable moments whenever Forrest shows up to do some ass-kicking or just a "really good job" where spectators will make hilarious comments meant to show us (the viewer) how great and badass Forrest Taft is, but only makes us laugh hysterically. Does it sound like I'm complaining? I hope not, because really these are all things that make On Deadly Ground as marvelous as it is. It's pure 100% Vanity Cheese and it's amazing! 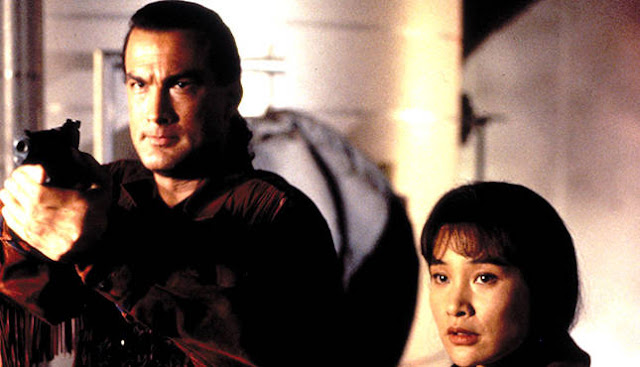 Released in 1994, Seagal was on a winning streak, and had just starred in the biggest hit of his career with Under Siege in 1992. So allowing him the chance to direct isn't all that surprising considering. What "is" surprising is that despite all of it's unintentional hilarity, on a technical level, he did a pretty good job behind the camera, which is a shame he turned it into what it ultimately became. The fact of the matter is that he's actually pretty darn capable of directing a big budget film well, handling the action intensely well, making each kill brutal and indulgently violent. What's even more surprising are the moments when he gives the film a big epic feel, capturing the gorgeous landscape of Alaska. As a first-time (and only time) director, Seagal really impressed the hell out of me with this, even if in the end he ultimately made it all about himself.

Another standout here is the surprisingly killer cast. Sure there's Seagal.....being Seagal, only dialed up to 11, and don't get me started on Michael Caine, here as the evil and ruthless Texas oil tycoon. Under a pound of heavy makeup, dyed brown hair and eye lashes, and a clear face-pull to make him appear younger, his appearance is so jaw-droppingly jarring that you just can't help but stare at him and think to yourself "something doesn't look right". Then there's his odd accent, which you just can't figure out. But moving on. 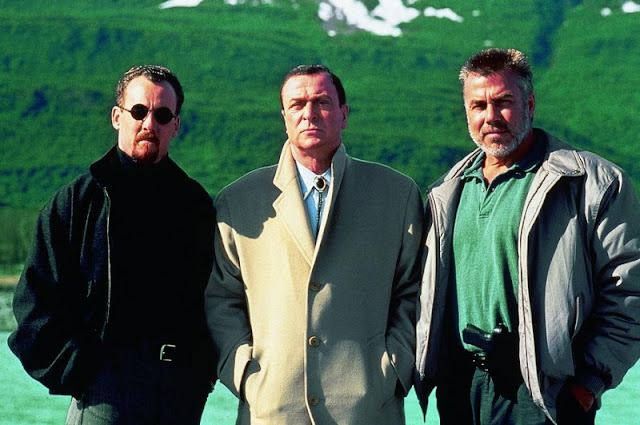 The film is littered with surprising faces, like R. Lee Ermey for one, as the leader of a mercenary group whom Jennings (Michael Caine) hires to hunt down and kill Forrest. One member of his group includes a young and almost unrecognizable Billy Bob Thornton, bearded, a lot heavier than we're used to seeing, and with his original thinning hair. Rounding out the cast of regular faces is Sven-Ole Thorson (yes, Arnold's pal), John C. McGinley and even Mike Starr in a small role as an asshole racist bar patron who gets his ass handed to him by Forrest, and ends the fight with a hilarious line about "needing time to change". Because, you know, Seagal's ass kicking made him want to turn his life around and not be a racist bigot anymore, because he's that good. The gorgeous Joan Chen shows up as an indiginous native, and the only one in her tribe to speak perfect English, who ends up going along with Taft to help him with his cause. I have to say, I've seen her in a lot of different things, and I have never seen her act so well as she does here. It's the first time I've ever seen her deliver full sentences because usually it's just a few words in a hushed tone and I can't ever figure out if she can actually act or if she even has an accent. Believe it or not, this was the first time I noticed she could in fact act, and act well. The fact that it took a Steven Seagal flick to notice that blows my mind.

The film is littered with nonsensical exposition, like the fact that the indigenous tribe have a fully functioning snowmobile at their disposal, and somehow have fuel to make it work, makes no sense, especially when Forrest Taft had been utilizing dog sleds up until that point. There's another moment; actually it's the same sequence where Forrest beats the shit out of the racist bar patron, where he challenges this big, fat bigot of a man to a game of "slap the hands" (WTF??), where if Forrest is able to slap your hands before you can pull them away, he can punch you in the chest. Naturally Forrest is an ace at this girl's game, and the beat-down ends with the bully wanting to change his life. You can't make this shit up!

On Deadly Ground, quite frankly, is remarkable for a number of reasons. One, that it's actually competently made by a self-righteous first-time director. Two, that it's hilariously hedonistic to the point of almost being a parody. Three, the action, of what surprisingly little there is, is actually pretty badass and impressively brutal. Four, the casting, not counting an oddly out of place Michael Caine, adds a layer of a very specific 90's cool to the production. Five, and the most important of the bunch, is that it's just a very fun time from start to finish. It's a flamboyant mess all around and I loved every minute of it. Is it a great typical Steven Seagal action movie? No, but it sure is a helluva fun time watching this hot mess.
Posted by robotGEEK at 3:32 PM