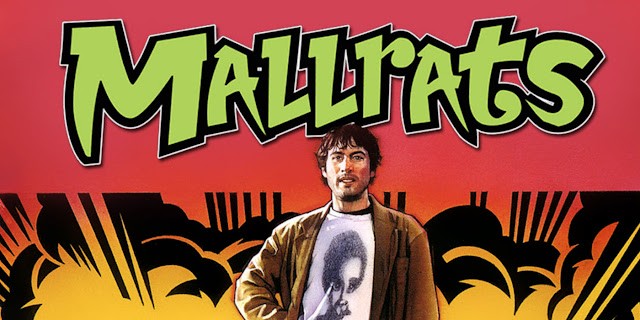 Kevin Smith's Sophomore Effort Was a Lot Better Than I Remember, and Reminds us of Why Malls Were Awesome

Much like most of you I'm sure, when Kevin Smith's Clerks was first released in 1994, I was an immediate fan. And I know I wasn't the only one as Smith immediately skyrocketed to fame as one of the most sought-after filmmakers on the planet, thanks to his witty clever dialogue and his almost guerrilla-style indie approach. I can't even tell you how many times I saw that film on good ol' VHS back in the day. So it's safe to say, Smith was a hot property, and we were all waiting impatiently for his next film, which would ultimately be Mallrats.

Personally speaking, Mallrats was a bit of a letdown for me when I first saw it in theaters. To me, it didn't feel like the type of film I was expecting from the guy who made Clerks. It felt too mainstream, too safe, and really......it was. Smith had the backing of a major studio for the first time, and the money to spend, which also meant he had to make the studio and their studio heads happy and like most filmmakers making a big budget film, he had to work within their perimeters of what type of film they wanted released under their brand. While there were some funny moments and a really great 90's soundtrack, I felt that the clever dialogue wasn't nearly as strong as it was in Clerks, or any other Kevin Smith film for that matter. So I just sort of forgot about it and moved on. But none of this soured my love or appreciation for Smith as a filmmaker, because I still saw all of his films when they were released, and oftentimes found myself revisiting most of them throughout the following years. But I never came back to Mallrats....until now. 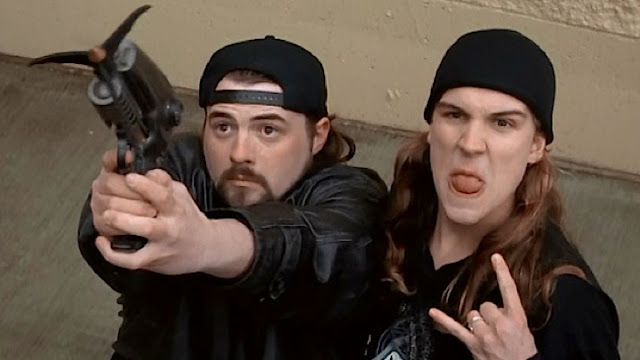 When I saw that it had been added to Crackle's streaming site, I took it as an opportunity to revisit it, thinking maybe it would be better for me this time around. And boy am I glad I did, because that's exactly what happened. I loved it. I loved it so much that I saw it twice in the same week, which never happens to me. I had to introduce it to my wife, who also loved it and I now find myself wondering just what the hell was wrong with me in the first place. Why didn't I connect with it way back in 1994 when I was 24 years old? I wish I could say, but in any case, I'm glad I took the chance to revisit it because it's now become my favorite Kevin Smith film, and a true 90's essential.

Mallrats is pretty much every comic geek's dream. The constant comic book references, as well as Stan "The Man" Lee's legendary cameo make for some true nostalgic geekery. It's also fun watching a very young Ben Affleck be an asshole,which I'm sure some would argue probably wasn't that far from the truth during that time. There's also the small bit with Three's Company's Priscilla Barnes as a topless fortune teller. I mean, the film is loaded with a plethora of fun bits that oftentimes lead nowhere, but really make for a fun experience overall. 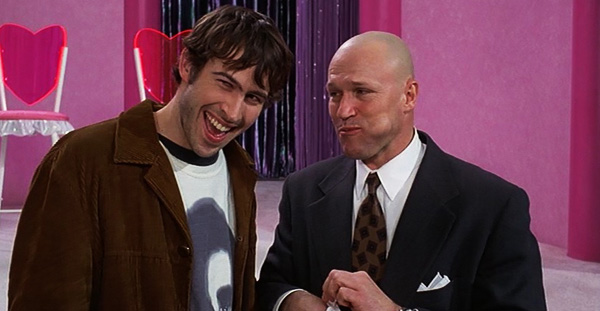 Then there's the whole "mall" angle. I think we can all agree that malls are becoming a thing of the past these days, with malls closing left and right as they just can't beat online shopping. What we get now are the outdoor storefront stripmalls, both small and large in it's place. And it's just not the same. But back in 1994, malls were the place to hang out with your friends, even if you didn't have any money to spend. You just went and spent literally the entire day just wandering around because without money, you had nothing better to do. And it got you out of the house, which I'm sure our parents really enjoyed. But one of this film's most endearing aspects is how it shows us what malls looked like back in the early 90's, all pastel colors and bright neon lights. Malls are becoming relics, and just speaking from personal experience, our crappy mall is about done and ready to close it's doors forever in my hometown. But this film was such a pleasant reminder of how awesome and fun malls used to be.

Watching Mallrats after 24 years was one of the most fun experiences I've had revisiting a film. Never a dull moment, filled to the brim with pop culture references, a killer 90's soundtrack, and a young, hip, fun cast make for a very fun time indeed. It's time I picked this up on a physical medium because it needs to be in my collection permanently.