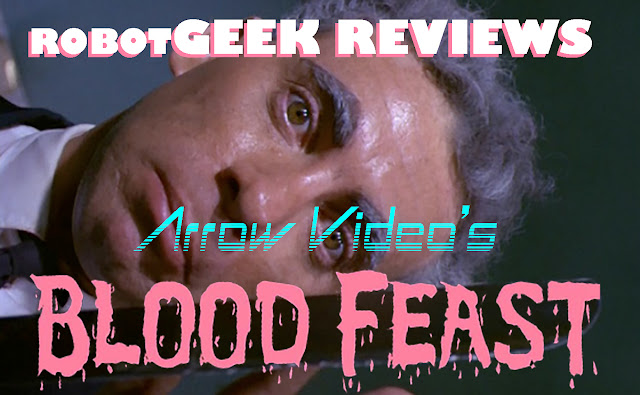 "I want something unusual. Something totally different"

Those are the words, spoken by a customer, that kickstart the killers savage killing spree in order to take fresh body parts from unsuspecting female victims to use for an Egyptian Cult Ritual, in the hopes that he can resurrect the Egyptian Goddess Ishtar. And so begins Herschel Gordon Lewis' Blood Feast.

Blood Feast is a film that needs no introduction. Known as the first slasher, as the Godfather of Gore H.G. Lewis so graciously states in his introduction to the film, it's legendary status continues to grow and remains one of the first cult classics ever made. Very few films can carry that distinction, and even fewer people can legitimately boast about being the first this or that, but H.G. Lewis can proudly, because it's true.

I had actually never seen Blood Feast until now. Sure I had various VHS releases throughout the years because no collection or true horror addict would be complete without one, but I just never got around to it. This new transfer courtesy of Arrow Films was just the thing I needed to finally experience the legend that is Blood Feast, in all it's 1080p glory. So let's dig in. I gotta say, Blood Feast was not at all what I was expecting, and that's just one of it's many strengths. I had always assumed it was somehow associated with the grindhouse genre, but I was completely wrong. I had this image in my head of the film looking dirty, grimy, dark and nasty, but it couldn't be any more opposite. Instead, it's a surprisingly retro looking candy-colored and unintentionally campy melodramatic horror film that surprised me on every level; the least not being how much fun it was and how much I ultimately enjoyed it. While there is plenty of gore, some that still looks shocking, and some that is a bit goofy, it's all of the moments in between that makes it worth watching. Sometimes it felt like I was watching a soap opera, complete with hammy acting and amateur performances, which was great. Other times it felt like a detective film, with two detectives trying to solve the series of murders using only their wits and nothing else. Then there's the slasher aspect (the heart of the film), which also works really well, if a bit amateurish. For all of H.G. Lewis's inept ability behind the camera, the rest of the film makes up for it in spades in candy colored gore and 60's nostalgia.

Since having seen this, I decided to finally dig out the other versions I had in my collection to compare, namely the Something Weird Video VHS release and one of many DVD releases and was shocked to find how muted and terrible the transfers were. You get no hint of correct color presentation at all and it's such a shame, because the film is an intense explosion of color. When it comes to an accurate presentation, this Arrow Video transfer just can't be beat.

Arrow Films delivers yet another knockout release here. The technicolor of the 60's is brought to exquisite life in what will be the definite Blu Ray to own of this film, hands-down. The image is insanely sharp, the bright red, green and blue colors of the 60's pop loudly. The audio is strong, with the exemption of a few moments where H.G. Lewis and his sound department clearly didn't do their jobs correctly in recording audio from afar, with the actors back facing the camera.

The filmography of late movie maverick Herschell Gordon Lewis brims with the mad, macabre, and just downright bizarre. But perhaps the most unhinged of all his directorial efforts, and certainly the most influential, must surely be his original gore-fest Blood Feast – the first ever splatter movie.
Dorothy Fremont is looking to throw a party unlike any other, and she gets just that when she hires the decidedly sinister Fuad Ramses to cater the event. Promising to provide her guests with an authentic Egyptian feast, Ramses promptly sets about acquiring the necessary ingredients – the body parts of nubile young women!
Featuring a host of stomach-churning gore gags including the infamous tongue sequence and much more nastiness besides, Herschell Gordon Lewis’ Blood Feast more than lives up to its name and remains essential viewing for any self-respecting splatter fan.
SPECIAL EDITION CONTENTS:

Blood Feast was released this past October in a DVD/Blu-Ray combo pack that comes Region-Free, in widescreen and with a host of fun extra's, including another H.G. Lewis classic, Scum of the Earth. "Blood Perspectives" is a thoroughly enjoyable interview where filmmakers Nicholas McCarthy and Rodney Ascher discuss the cult status of Blood Feast and how it's impacted the horror genre. "How Herschell Found his Niche" is also an informative interview with Lewis himself discussing how he started in the business (he was formerly an English teacher) and his transition to filmmaking and how he found his way in a sea of competition. Lewis is so kind, so warm and so endearing in his interviews that it's shocking that this is the same guy who makes some of the most legendary gory films ever made. You would never put two and two together, but I think that's what makes him such a fascinating individual. The extra features are loaded here, and you'll have a good time digging through all of them.

Pick up your copy of Arrow Video's Blood Feast from a number of online retailers today!
Posted by robotGEEK at 2:17 PM