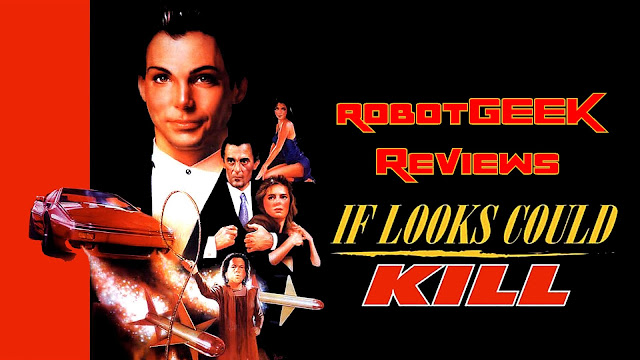 "Where an adult plays a high school kid who assumes the identity of an international secret agent to get a seat in first class, only to get sucked into a world of espionage, hitmen and murder" What do you get when you cast a 26 year old hot off the success of a hit TV-Show as a high school student, and mix it with a wannabe James Bond-style story, only with comedic overtones? You get this early 90's cult classic that didn't really do much upon it's initial release, but has gained momentum as a cult classic through the following years.

This one has been on my radar for ages now, but it's not a film I can recall ever playing on any channel and never pops up for streaming on sites such as Hulu or Netflix. So it's been sort of out of my reach. But it's because of it's under-the-radar success that I decided to finally just grab myself a copy, which I ultimately did on Laserdisc. So let's dig in.

When Michael Corben (Richard Grieco) goes on a school field trip to France with his French class, he assumes the identity of a man with the same name in order to get a seat in first class, not realizing the other Michael Corben is a secret agent. He's soon caught in a case of mistaken identity, and thrust into international espionage with hitmen and killers hot on his trail.

For all intent and purposes, William Dear's If Looks Could Kill is better than it should be. While not necessarily all that great or original, it succeeds enough in many areas to make it surprisingly fun. And that's all we really want in one of these films isn't it? In that respect, it succeeds in spades. Richard Grieco, here attempting to play someone 10 years younger, does an admiral job, if  wholly unconvincing. But you have to give him credit for even trying, because the idea alone is absurd. Not surprisingly though, John Stamos did a better job at pulling it off in Never Too Young To Die. Still, nothing about this film is believable in the slightest anyway, so who cares? Director William Dear (Harry and the Hendersons, Timerider) infuses the film with solid action, stunts and an infectious charm that you really can't help but fall in love with it. It helps that Dear is a solid director to begin with. While he may never get a job directing an actual James Bond film, he does a commendable job in this wannabe by giving the film a style that's neither slick nor lazy, but more in line with directors such as Brian Levant (Jingle All the Way) or Jon Turtletaub (National Treasure); the kind of interchangeable directors that don't really offer much in terms of singular style, but can get the job done.

Not surprisingly, the two most significant things that make this film the treasure it is will no doubt be it's stellar supporting cast (Linda Hunt was a hoot as a whip-yielding villain) and it's final act, where the action is ramped up to 11, and we're treated to a large scale disaster involving a helicopter and a mansion courtesy of some unconvincing, yet awesome model work that gives the film that little spark of retro-cool it needed. This entire sequence, which takes up the bulk of the last 20-30 minutes, goes deep into bonkers territory, but saves itself from being dumb because it's actually pretty cool. Sure it doesn't look real, but the way they blended extensive model-work chaos with live action kind of blew my mind. If "cheesy-cool" was a thing, this would definitely be it.

Ultimately it's a very fun, if a bit silly film. It never takes itself seriously (at all), instead chooses to play with all the espionage/spy thriller tropes with a "wink at the camera" approach, which in all honesty, was a bit refreshing. Stellar cast, fun tone and some solid action and stunts. For sheer entertainment, If Looks Could Kill is loads of fun. Fun Facts:
The real secret agent Michael Corben was played by David McIlwraith, who starred as the killer cyborg in one of my all-time favorite cult classics The Vindicator (1986).

The film comes from a story by Fred Dekker (The Monster Squad, Night of the Creeps), and written by Sex and the City writer and creator Darren Star.

Fred Dekker originally conceived the story with the idea that Anthony Michael Hall would star. Honestly, that would have been a much better and more believable fit.

How To See It:
Released on VHS and Laserdisc, the only DVD release this has received here in the U.S. is on a Warner Archive release from 2010. No other releases on DVD and still no word on any Blu-Ray in the near future. I've tried for a long time to see if it would pop up on a streaming site such as Hulu, Crackle or Netflix, and it never has. It's not even available to rent on Amazon, which is really surprising.
Posted by robotGEEK at 11:27 AM