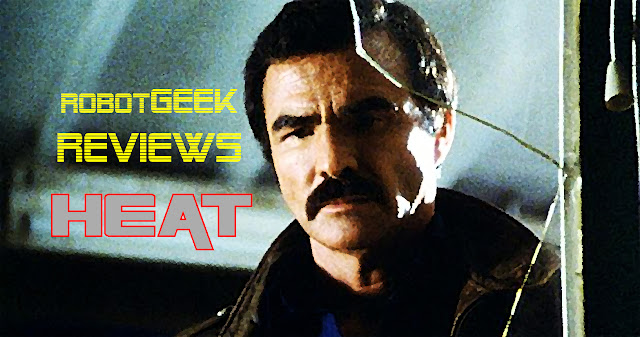 This mid 80's Burt Reynolds classic has been on my radar for a very long time. I tend to go through Reynolds phases where I'm just enamored with the guy. I know he's a bit of an asshole in real life, but onscreen there's just something I find so fascinating about him. He's like the quintessential tough older guy to me. Sure he had a nice long run in comedies, but it's his action/thriller's that I always tend to connect more with, with my 3 personal favorites being Stick, Sharky's Machine and Malone (in that order). While neither of them are perfect, they're awesome enough that I can overlook their issues. Let's dig in. 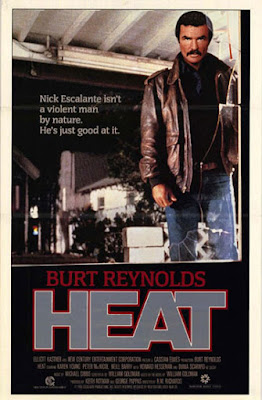 To put it quite frankly, Heat is a mess. I honestly struggled to find any enjoyment out of it because for the most part, I was bored out of my mind. For a film with such an awesome cover like this, there's very little thrills involved. The cool name, misleading cover and stark potential differs greatly from the film we ultimately get, which is more of a drama than anything.

The film starts off promising enough as we see a beautiful woman being dumped from a car, severely bruised, bloody and beaten. We soon learn she is the ex-wife of a local private detective named Mex, a racial nickname since his real last name is Escalante. So everyone in the film just naturally calls him Mex, because he's supposed to be Mexican? I can only guess. She begs Escalante to go and deal with this for her, which he tries to do by pretending to be her pimp in the hopes to finagle her free from whatever grip this slime-ball thinks he has on her. Escalante ultimately makes the situation worse by fighting with this rich Italian kid with ties to the mafia and his 2 muscle-bound bodyguards in the films most hilariously awful fight sequence. Trust me, you'll know what I mean when you see it. This rich kid soon makes life hell for Escalante and it's only a matter of time before they meet again to settle their score.

Sounds interesting, right? But wait. Instead, we're treated to a movie about Escalante's constant headaches (a plot point that goes nowhere), his gambling addictions and the little jobs he takes to make a few extra bucks on the side. So much of the film meanders through pointless and boring storylines that have nothing to do with the original story about the Mafia Rich Kid that you forget that that was the focus of the film in the first place. In fact, it's nearly completely glossed over with other mundane plot points that it doesn't come back into play until the very end of the film, at which point you remembered what the film was originally about. I will admit though, the last 15 minutes of the film kick ass. I'm not gonna lie. I enjoyed this last bit a lot, but then was frustrated when I realized how dull the entire film was until the last 15 minutes. Escalante literally goes to war against the Rich Mafia Kid and his goons and it's awesome. It's just frustrating that you have to wait a full hour and 20 minutes for it to happen.

A few other issues I had were with it's blatant racism. I honestly don't notice it a lot of the time or put much thought into it, but it was so in-your-face here with the constant Hispanic jokes, the frequent racial slurs and just the fact that every single person calls him Mex. It's all very un-PC. Also, the lead actress who plays his ex-wife, Karen Young, was just absolutely dreadful. I couldn't tell what type of accent she was attempting (Southern?), or if she was even trying to. I cringed every second she opened her mouth and of all the frequent changes made during production, I'm shocked that she wasn't one of them. 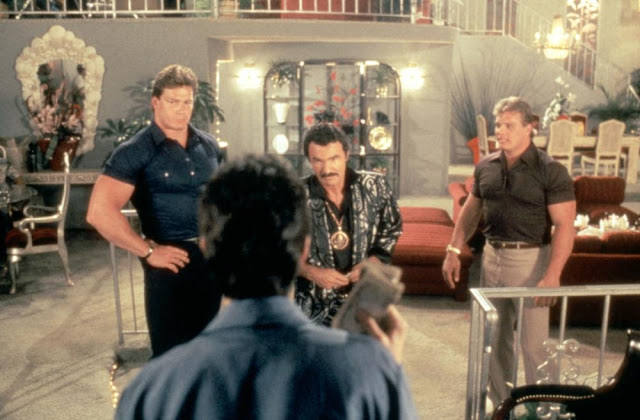 Ultimately, the mixed bag of different storylines, the painfully dull running time, and the surprising bait-and-switch approach just leaves you frustrated and makes Heat a very weak film overall. While the ending is pretty cool (with a rad stunt involving Burt kicking an overhead lamp engulfing a bad guy in flames), it doesn't save the film. To put it simply, it's too boring for it's own good.

Learning of the films troubled production doesn't surprise me one bit. It's a mess of a film and literally looks like a handful of different directors worked on it, which is actually the case here. Though the legendary Robert Altman was originally slated to direct (I can only imagine how much better it might have turned out had Altman done it), the film changed hands frequently. So who knows how much of each shows up in the actual film. Reynolds actually got into a physical fight with one of the directors, Dick Richards, who successfully sued Reynolds for his broken jaw.

This was the start of the decline for Burt Reynolds in both films and his personal life. Where he was once considered a box office champ, and all of his films hit theaters, this would be the moment where he would alternate frequently between low-budget films to theatrical releases, and a few shows on the side. He would work relentlessly, never taking a year off, often doing many projects in a single year. He would find his biggest success with his TV show Evening Shade between 1990-1994, but continue to star, guest star and cameo in countless projects, both big and small. He would never regain the popularity he once had years earlier, but he would ultimately deliver an Oscar nominated and Golden Globe winning performance in Boogie Nights for Best Supporting Actor in 1997, sort of reminding the world that he was still around and still quite good given the right material. Burt Reynolds continues to work tirelessly today. If this experience did anything for me, it's in reminding me that I really need to revisit Stick and Malone, and maybe finally check out Rent-A-Cop for the first time. 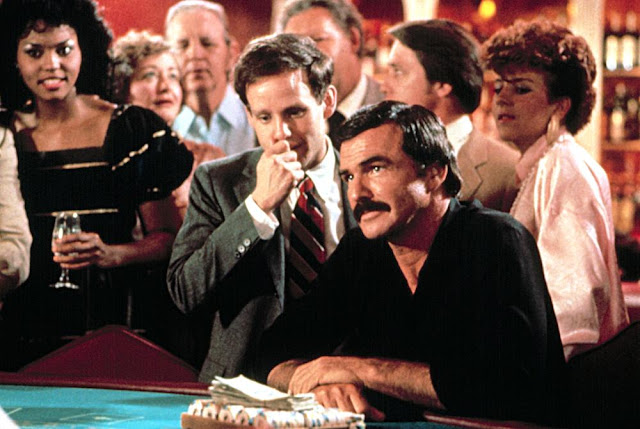