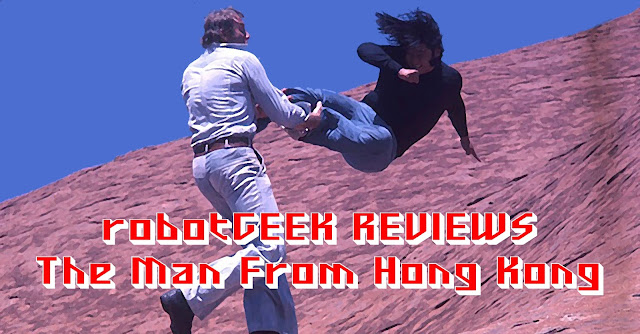 
"An Aussie-style James Bond clone that mixes Kung Fu, car chases, death-defying stunts and an almost absurd plot that balances the fine line between camp and serious hardcore action gracefully for a killer of a good time"

This is a film I only became aware of after seeing the excellent documentary "Not Quite Hollywood: The Wild, Untold Story of Ozploitation!", which focuses entirely on......you guessed it, Ozploitation (exploitation in Australia), and typically centers on films from the 70's and 80's. When this was featured on that excellent doc, I was immediately intrigued. It looked like loads of fun, and with legendary cult filmmaker Brian Trenchard-Smith at the helm, I was sold. Unfortunately, this was a hard film to find here in the United States. In fact, I'm not even sure if it was officially released here on any format because I've never seen one. Whats more, it "still" doesn't have a release here in the states to this day. Lucky for us, the excellent team over at Umbrella Entertainment released this as a Region-Free Blu-Ray back in March of 2016 for a killer price. So let's dig in.

SYNOPSIS:
The Far East picks a fight Down Under in The Man From Hong Kong, a cult martial arts action extravaganza from Ozploitation legend Brian Trenchard-Smith (Dead End Drive-In, Turkey Shoot and BMX Bandits).
When Hong Kong Inspector Fang Sing Leng (Jimmy Wang Yu,Master of the Flying Guillotine) travels to Sydney to interview drug trafficker Win Chan (martial arts star and director Sammo Hung) he is flung into an international investigation destined to test his mettle and might.
Teaming up with Aussie Detectives Gross (Hugh Keays-Byrne, Mad Max, Fury Road) and Taylor (Roger Ward, Turkey Shoot), Fang soon discovers a cunning connection between Win Chan's drug imports and larger-than-life local gangster Jack Wilton (George Lazenby, James Bond in On Her Majesty’s Secret Service).
Determined to get his man, Fang will stop at nothing – bringing all manner of mayhem to the streets in a full-on fist fighting spectacle of explosive proportions. 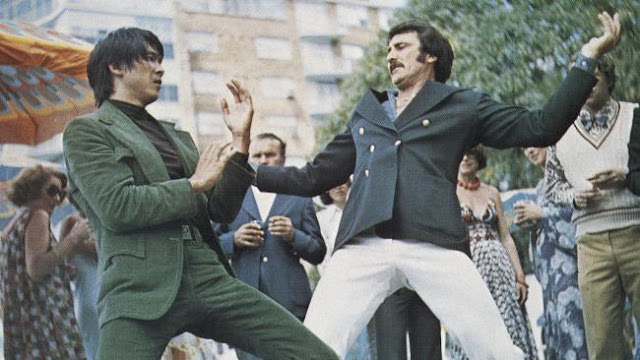 While I had a feeling just based on the scenes shown in that aforementioned documentary that this was going to be fun, I don't think I was prepared for just how fun and how badass this would ultimately be. The film, a blast from start to finish, was full of surprises, the least not being that legendary Hong Kong god Sammo Hung co-starred in this. He was excellent, and while the film's main star Jimmy Wang Yu, does a decent (if a bit forgettable) job in the lead, it's really the one and only George Lazenby (On Her Majestry's Secret Service, Never Too Young To Die) who steals the show, here playing the villain, local gangster Jack Wilton. Not to say the film is perfect, because it's not. It's chock-full of very un-PC stereotypes, racial slurs and racial jokes (the 70's were certainly a different time). I think one of the most hilarious WTF? elements has to be where Wilton (Lazenby) is actually the kung fu instructor at an Australian martial arts school, where quite shockingly, all of his students are actually Asian. Huh?

The rest of the cast is filled with Aussie regulars, but it's the lead that not surprisingly stands out. Not because he's great, but because he just doesn't come across as the leading action hero type and largely out of his element. I know that's the storyline, but one can't help but feel that real life mirrors art in this instance. He's small, and though he's clearly speaking English, he's been hilariously dubbed. He's also incredibly smug, uncharismatic and highly arrogant. I'm not sure if that was entirely written down in his description on page, but based on the reports of his behavior on set, I'll go out on a limb and assume that some of that was Jimmy just being himself.

One of the film's finest elements is it's strong use of surprisingly brutal and death-defying stuntwork. Seriously, even in some of the fight sequences I found myself flinching from time to time. Even with the fight scenes, they go on and on for so long you almost forget that there's supposed to be a movie in here somewhere. Hey, I'm not complaining though, because the insanely long and brutal fight sequences are outstanding. But it's in the many chase sequences, some on foot and some with cars, that really blow your mind and make it as memorable as it is. The many uncomfortable racial slurs aside, the plethora of stuntwork, the killer 70's fashions and George Lazenby being so over the top as the main villain makes this one helluva fun ride and well worth seeking out. This is a classic by every definition. 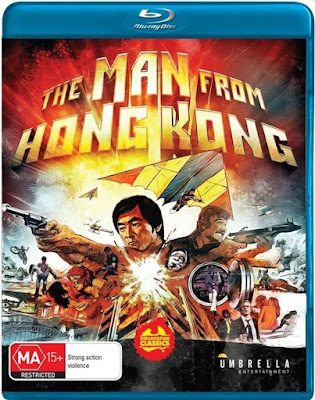 Thankfully, this comes in it's original widescreen aspect ratio, and believe me, writer/director Brian Trenchard-Smith makes full use of this extreme widescreen presentation. Trenchard-Smith has always been pretty hit or miss for me, and I don't always like some of his stuff, but I can honestly say this is one of his hands-down one of his best films.

Umbrella did a fantastic job with the new 4K transfer. It's vibrant technicolor pallet will melt your cornea's and if you dig retro visuals, then you'll just love the look of The Man From Hong Kong, and Umbrella's new restoration blows any previous release out of the water. It's literally the best you'll see of this film.

Now, to make this release an even sweeter deal, 5 of Brian Trenchard-Smith's other films are also included in the Special Features section and include Death Cheaters (1974), Stunt Rock (1979), Kung Fu Killers (1974 TV Documentary), Dangerfreaks (1989 Documentary) and The Stuntmen (Documentary). So that's 6 of his films on this one disc!

The Man From Hong Kong comes packed to the gills with special features and extra content and is available on both Region-FREE DVD and Blu-Ray at a really great price via Umbrella Entertainment. You can order directly from their website HERE or any number of online retailers.
Posted by robotGEEK at 1:32 PM