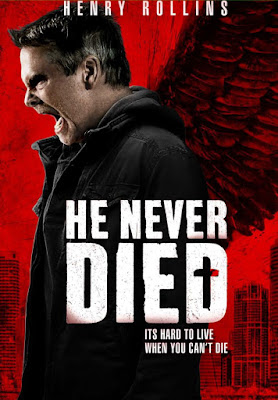 Up until a week ago, I had completely forgotten about this film. I remember seeing some buzz when it was hitting the festival circuits, all of it positive, but not much was said about it in terms of release date or anything for a long while after, and it just got lost in my endless stream of films. I don't know how or where it popped up on my radar again, but it did, and I was ecstatic to learn it was available for streaming. I hit up my movie group, and we threw this on on a Friday night.

I can honestly say that we were all pleasantly surprised. We didn't know anything about the film in general, other than it was supposed to be dark, and starred Henry Rollins. But going in without any expectations may have worked to our advantage. He Never Died worked well on a number of different levels. So much so that it's hard trying to classify or pinpoint what type of film it's supposed to be. But you know what? That's fine, because in the end, the film is entertaining, and that's what really matters.

Going in without much of an idea of what the story is about is probably the best way to do it. I will say it's about a guy (Rollins), who's generally an all around asshole and just wants to be left alone. One day his adult daughter, who he didn't know he had, shows up randomly at his door. What results is a number of unconventional plot and storytelling shifts, techniques and genre's that kind of seem to blend together seamlessly in a way that actually works. Whether you like horror, comedy, or something dark; it's all in here and you'll ultimately enjoy it for what it is, and that's pure original entertainment.

Henry Rollins is just excellent in this. I've honestly only seen him in just a few random things in regards to his acting, most notably his turn as a drill sergeant in the excellent Wrong Turn 2, but this role seems tailor made for him. And who knows? Maybe it was? It's pitch perfect, spot-on casting and Rollins excels in the role.

If I had any complaints, the only real one I can come up with is that the ending didn't seem to satisfy me in the way I expected it to, especially considering the build up. It wasn't enough to ruin the experience, not by a long shot. But it didn't seem very fitting, and I'd be lying if I said I wasn't a little let down.

The direction by Jason Krawczyk is really solid, and quite honestly, when compared to a lot of the big budget garbage being directed by newcomers these days, is really quite refreshing and ultimately, impressive. I would imagine that some would call his script for this a bit uneven, as it seems to go in so many different directions, but I actually found that to be quite refreshing for a change. The film kind of keeps you on your toes, because you never know what to expect or where it's going to go, or how far it's going to go for that matter. For this, He Never Died stands out among the crowd as one of the better low-budget offerings out there.

If you find this available to stream or rent, I highly recommend it.
Posted by robotGEEK at 10:11 AM