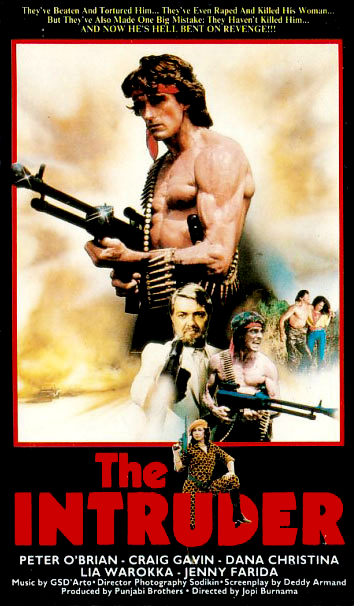 Always on the hunt for Bad Movie Night material, I would randomly stumble upon this title whenever the topic of Indonesian action films of the 80's or star Peter O'Brian was ever mentioned. Shockingly, O'Brian only ever starred in a handful of films in the 80's going into the 90's, with only a few of those being memorable, despite his magnificent onscreen presence.

Literally plucked randomly from an airport by Indonesian film producers, O'Brian made both The Stabilizer (his most famous film), and this the same year, giving us a one-two punch of awesome. While The Stabilizer is his most popular film and easily able to purchase on DVD from Troma Films (Yes, that Troma), his other films are near impossible to find here in the states, with The Intruder AKA Rambu being the most difficult to get your hands on being as none of O'Brian's films have ever been officially released in the U.S., except for The Stabilizer, which, by the way, is also great.

But I decided to take my chances on The Intruder when I found an online dealer selling a decent bootleg DVD, and well, for one reason or another, the DVD sat on my shelf for the better part of a year. I don't know why. But one night the wife and I were looking for a Bad Movie to preview for our Bad Movie Night's, and while she didn't know what to expect, just the fact that it was an action film, made in the 80's, starring a guy from New Zealand who looked like a skinny version of Rambo, and was made in Indonesia had her attention. She was sold. We threw it on, and hoped for the best.

The result? Easily one of the best, most entertaining Bad Movies we've ever seen. I mean, what can you say about a film that right off the bat begins with a car barreling down the road and then hitting an old lady from behind as she's walking and minding her own business. Only to then be harassed by 2 thugs who yell at her for being in their way and begin physically assaulting her, only to be interrupted by a stranger with a stick, who warns them to leave her alone or suffer his wrath. Of course they ignore him, and he immediately pummels them to the ground effortlessly. But when they jump in their car and begin to drive away, they threaten him verbally, where he in turn uses a tennis ball he randomly had in his pocket, to kick the living shit out of both of them. Yes, you read that right. He uses a tennis ball to beat the shit out of two guys. When the guys run away, the ass-kicker says something along the lines of "Tell your boss if he has anything to say to me, you know where to find me. The name's RAMBU!", which is followed by an 80's synth music cue, and the title blasted on the screen. I'm not making this up. It's just one of the most hilarious and fucked up things you'll see on a minute by minute basis in this gloriously inept, yet brilliantly entertaining film.

It's hard to say exactly what the story is about, as it throws a few at you and so many things are happening at such a furious pace, you just kind of take it all in and go with it. But from what I gather, Peter O' Brian plays Rambu, a caucasion living in Indonesia who unwittingly begins messing with the local drug kingpin's shipments. He then inadvertently joins forces with another bad guy, only to be double-crossed, and............well, to put it simply, he gets upset, and sets out on a mission of revenge, only this time, he's dressed as Rambo, and it's amazing. He goes by the name Rambu, yet half the time they call him Rambo, by mistake? No idea, but it's hilarious. And just wait till the full-on Rambo: First Blood Part II stealing comes into play. It's incredible.

This film is hilarious. You won't find the same kind of over-the-top and insanely dangerous stunts that make other Indonesian classics like The Stabilizer and Final Score so memorable and worthy of their cult status, but for sheer entertainment value and laughs, The Intruder is really one of the best we've come across. Hilarious and entertaining bad 80's action films do not get any better than this gem. Being from New Zealand, O'Brian is dubbed......hilariously, and truthfully, that's what makes this experience even better. The dubbing all around will leave you laughing uncontrollably.

I believe you can find the full film on YouTube, but it's dubbed in German with no subtitles. So unless you know German, skip it because the terrible and hilarious dialogue is half the fun. You can purchase a physical DVD complete with cover art and case over at CultAction.com, which is where I got mine. It's probably the best version you'll find, but it's not great, looking like it was ripped from an old and worn VHS. But still, it's the best you'll find unless it ever gets a legitimate release some day.

O'Brian never made it big, and it's a bloody shame. He's just amazing with an even more amazing presence, and he should have been much bigger than just a few low-budget Indonesian flicks. The Stabilizer is a good start as it's the easiest to get, and it's also directed by the great Azizal (Final Score), but The Intruder is hands down the best flick from his criminally short career.

You can check out my past reviews of Peter O'Brian's films below:

American Hunter - http://robotgeekscultcinema.blogspot.com/2015/08/bad-movie-night-american-hunter.html
Posted by robotGEEK at 7:29 AM