Scouts Guide to the Zombie Apocalypse Film Review; Another Solid Entry in the Horror/Comedy Genre 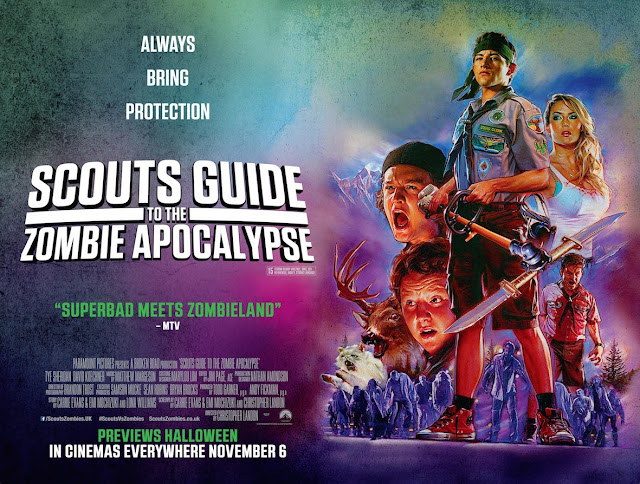 Is it just me, or does it seem like Horror/Comedy's are big again? I mean, it's always been around, but to me, it just seems like they're front and center again, and I can't remember the last time they were a thing. The 80's perhaps?

Riding the success of other recent "funny" horror films like Deathgasm, Cooties and even Final Girls, in the low-budget area, Scouts Guide to the Zombie Apocalypse slid way below my radar compared to the others. I actually hadn't heard of it until it was officially released on DVD and Blu ray, which is odd since these types of films usually need some strong word of mouth and positive buzz "before" it becomes available to us to rent, stream or buy. In any case, it hit the home market, and when it did, only then did I find a ton of posts about it online, and it was all positive. So I was pretty much sold right from the beginning.

When a zombie outbreak takes over a small town, three life-long scouts use they're experience, with some help from a cocktail waitress, in fighting them off and saving their friends and family.

SGttZA is a lot of fun, there's no denying that. If you're in the mood for a good, well-made, and well cast horror/comedy, this will certainly fit the bill and deliver the goods. It clearly knows it's target audience and delivers the funny, horror, gore, and titillation copiously. It accomplishes everything it sets out to do; no more, no less. With that being said, while it was another solid entry in the horror/comedy genre, I didn't quite find it as funny or entertaining as either Deathgasm or Cooties. But you know, it is what it is and what it is is a damn good and funny film. I just find it hard to top Cooties in the laugh department. I can't remember the last time I laughed so hard, and well, Deathgasm is just awesome. It's the fucking heavy metal horror film we wanted in the 80's. It also helps that it's hilarious too. The dildo sequence; pure gold. SGttZA doesn't have any of those memorable sequences, but it is consistently entertaining, and sometimes, that's enough.

Paranormal Activity 2-5 screenwriter Christopher Landon does a great job in the genre shift, infusing the film with a nice aesthetic (it never once looks cheap), and some genuinely clever ideas to give this film a bigger feel than it has, which is a good thing. That's a testament to great filmmaking right there.

SGttZA doesn't break any new ground, but when it comes to low-budget DTV entertainment, it's about as good as they come. It's funny, gory, and has some genuine zombie thrills. Really, what more could you ask for?

Scouts Guide to the Zombie Apocalypse is currently available at Redbox, Amazon and your local rental store.
Posted by robotGEEK at 9:32 AM