I Saw BLADE RUNNER on the Big Screen 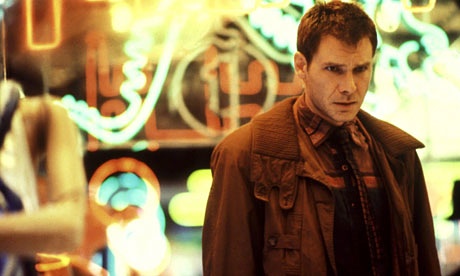 First off, I should say that Blade Runner is, has, and always will be one of my Top 5 Movies of all time. It's always held a special place in my heart for various reasons. Even at a really young age, there was always some kind of connection for me. I've always been a visual person, and maybe even as as youngster that's where my love for this film began? I really don't know. Because while this film is not everyone's cup of tea, you can't deny that on a visual and aesthetic level, it's incredible. A lot of people don't like this film. A lot of people can't ever sit through an entire viewing of this without falling asleep. I personally know a few of them. And while I do admit it's big on the slow side, that never deterred my enjoyment from this. Blade Runner, for me, is a masterpiece of Science Fiction Cinema.

When Blade Runner was released in 1982 theatrically, I was only 6 years old, too young to appreciate that film in general. I always thought it looked cool, and always remembered thinking how weird it was too see Han Solo with short hair, being much more of an asshole than Solo ever was. But that was always it, and the fact that it was a science fiction film that looked cool. It wasn't until decades later as an adult that I actually sat down from beginning to end and "got" it. I finally understood what the film was about. It wasn't a science fiction action film set in the year 2019. It was a slow-burn detective noir that just happened to be set far in the future. It didn't have a lot of action. It didn't have crazy stuntwork. It didn't have explosions. It didn't have flying car chases through the city-scape. It was a dark and brooding detective story interweaving several different points of view of the same story, culminating in a bleak character study about what it means to be human.

Since it's theatrical release, there have been several different editions released on VHS, Laserdisc, DVD and Blu ray; The Theatrical Cut, The Directors Cut, The European Cut, and Ridley Scott's Final Cut. I've owned all of them in various forms throughout the decades, but I have to say that when The Final Cut was released on DVD and Blu ray in 2007, which came with Dangerous Days, the insanely meticulous documentary on the making of Blade Runner, it was arguably the best version of the film released to date, in the best possible quality. I still play that DVD randomly on occasion. But I never saw Blade Runner on the big screen, something I never imagined I would be able to experience in my lifetime. 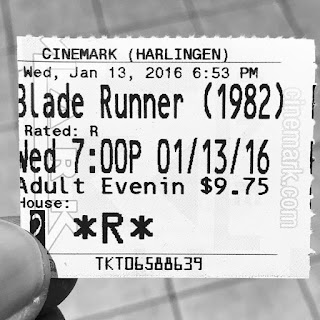 But, when I recently saw Star Wars: The Force Awakens, they showed an advertisement for the Classic Cinema series, where they show a different classic film every week for 2 showings; one on Sunday and one on Wednesday. When they showed that Blade Runner was going to be showing in a few weeks, I nearly lost my shit. And that's on top of the fact that I was already sitting in a packed theater about to experience a Star Wars film again. It was almost too much for me to handle.

2 weeks later I'm sitting in a theater on a Wednesday night for the 7 PM showing of Blade Runner. My wife and I count a total of 6 people in the theater. Frankly, I'm shocked. I assumed there would have been at least a dozen or more for sure. I mean, it's fucking Blade Runner! A certified sci-fi classic! When will we ever get this chance again? As it stood, I had to wait 34 years for the opportunity to present itself to me again, and I surely wasn't going to miss this opportunity. I guess I assumed others felt the same. I was wrong. But hey, I was there, and that's all that mattered to me at that moment. 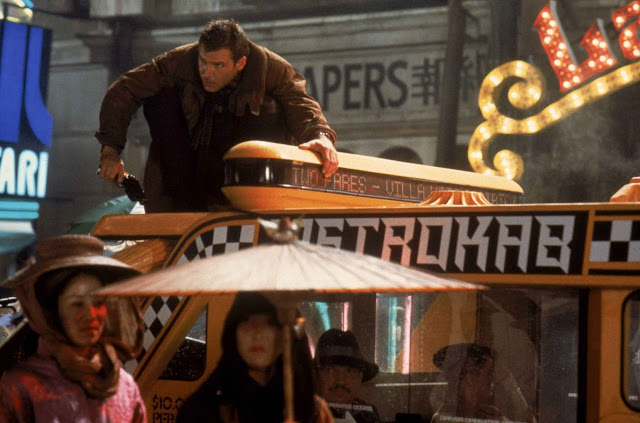 Words cannot describe the sheer joy, enthusiasm, glee, and excitement as the old, and now vintage, Warner Bros logo displayed on the screen. From that moment, every single second, which I had only previously ever seen on my television screen, was displayed in a grande epic size in front of me. For the next 2 hours, my eyes were transfixed. Even though I've seen this film countless times, watching it on the big screen was a completely different experience altogether. Blade Runner "looked" different. It "felt" different. It was one of the most visceral movie-going experiences I've ever had. Ridley Scott's meticulous and obsessive attention to detail is on full display. His "layering" (or insanely large amount of detail to everything in the scene in the background, most of which you never see) is prominently displayed front and center, in epic scale. There were so many little things I never noticed before, things I'm sure most never noticed before just by simply watching it on their television screens. But here, in a large format theater screen, "everything" is jumbo sized, and all that hard work made possible by thousands in the art, set, costume, and production departments respectively finally made themselves known. They made a difference. They created a world. They created something on film that has never been duplicated, not even 34 years later, no matter how many times they've tried. Nobody has ever matched the audacity, determination, and mad genius that Ridley Scott demanded for this film, and I doubt anyone ever will.

Blade Runner on the big screen was one of the best movie-going experiences of my life. I had to wait 34 years for it to happen, but it was worth the wait, and I'll never forget it.
Posted by robotGEEK at 2:15 PM