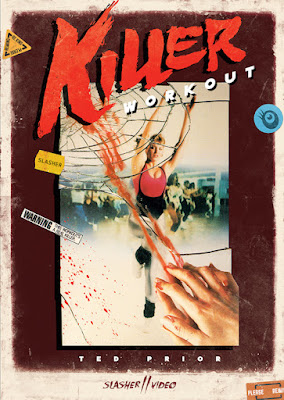 1986
Directed by: David A. Prior
Category: Horror

If you're a Bad Movie lover, horror fanatic, or VHS collector, then you know Killer Workout is legendary. Mainly because it's bad in an entertaining way (a rarity with these types of films) , and also that it's insanely rare to come by. The VHS goes for a good chunk of change if you can find one in decent shape, and it's never gotten an official DVD release until now, almost a full 30 years after it's release.

Legendary cult filmmaker David A. Prior (Deadly Prey) writes and directs this low-budget masterpiece and uses nearly the entire cast of his other '87 film Deadly Prey. The result is arguably one of the best, funniest, most 80's slasher films ever made. I shit you not. Every single minute of this film is gold, and if there was ever a good horror candidate for Bad Movie Night, it's Killer Workout.

I'd hate to divulge too much information about the plot because we found that as ridiculous as the plot points were, it sure was a helluva lot of fun watching them unfold. Essentially, Rhonda runs a local gym where her customers begin falling victim to a killer. Really, that's all you need to know because that's the meat of the story. However, there are enough peculiar plot points and twists that keep the story moving along nicely. It also helps that Prior shoots this very gratuitously. You'll know what I mean when you watch it.

There is so much nonsense to laugh at in here that it's hard to tell you where to begin. I've always considered David A. Prior to be an inept filmmaker, yet somehow he was able to keep making film after film on a minuscule budget. But there's a "So Bad it's Good" quality to a lot of his films, and it's these rare little gems that make us coming back for more. Truthfully, I never got around to watching neither of his 2 most famous films, Deadly Prey and Killer Workout, until Olive Films obtained the rights and released them on both DVD and Blu Ray this past year. While the transfer's aren't very good, I understand they did their best with the best elements they could find for these SOV classics. Being as these were never shot on actual film, it's totally forgivable, and you know, there's a bit of nostalgia to the fact that it looks like you're watching a VHS.

Every actor in here, led by the great Ted Prior, is amazingly awful and cheesy. I'm sure the dribble they were forced to spill out didn't help. Yet, as bad as they were, they were also fucking brilliant. It takes a certain kind of actor to deliver these lines with a straight face, and holy fucking shit do they ever deliver in this.

I really can't praise this film enough in terms of entertainment value. Killer Workout easily ranks as the best of the best in the Bad Movie Night sub-genre. Grab your buddies, grab some beer, and throw this baby on. You're guaranteed to have a badass time.
Posted by robotGEEK at 9:24 AM