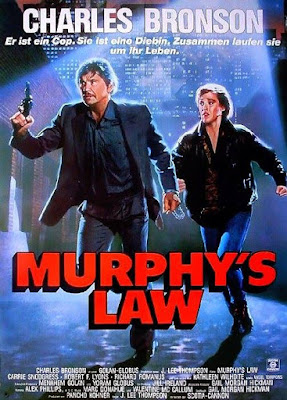 You know, as big an 80's action fan as I am, I never got into Charles Bronson. There's no reason really, I guess I just never took the time to. I always seemed to gravitate more towards Chuck Norris rather than Bronson when it came down to the Cannon Films regulars. I think because Norris' films were more "action" oriented and Bronson films seemed to lean more towards the "thriller" genre. And I have to admit, I think I've ever only seen 1 Charles Bronson film all the way. Damn!

While sick in bed all weekend, I decided to take the opportunity to force myself to watch a handful of films I'd always been meaning to, but never got around to, with "any" Bronson film falling into that list. On a Sunday I watched about 4 completely forgettable films that left a sour taste in my mouth, and thought how great it would be if I ended the night on a high note. When the Cannon Films logo flashed on the screen before the film started, my enthusiasm skyrocketed, and with that, I hoped for the best.

This is exactly the kind of film I needed after a slew of forgettable trash. Murphy's Law is the reason Cannon Films were so great in the 80's, and if this is any indication of what most of Bronson's films are like while he was under contract with them, then I'm in for a helluva good time as I dig into their collected works.

Murphy's Law is a solid 80's action thriller. Everything about this film works so effectively well that I can see why Bronson, director J. Lee Thompson and Cannon Films made so many films together in the 80's.

Jack Murphy (Bronson) is a down on his luck cop who just can't get over his wife leaving him. You know this because he still stalks her on a daily basis. A serial killer is on the loose. But this serial killer seems to target those closest to him, including his ex-wife. With the help of a petty thief, Murphy must try and stay alive and figure out who this killer is. Murphy has no intention of taking this killer in. He's out for revenge.

J. Lee Thompson is a strikingly competent director. Every shot is done with a cool 80's aesthetic, and with an air of confidence. In a time when so much of what we see now is freestyle hand-held, it's a breath of fresh air, and like I keep saying, "they just don't make them like this anymore". Structure-wise, one of this films greatest assets is that it never sticks to a single vibe for very long. It's a little funny when it needs to be, serious when it needs to be, and surprisingly violent (which really threw me off at how brutal it was at times) when you least expect it. It has the ability to keep you on your toes and most importantly, keeps you entertained.

I think one of the greatest things about Bronson as the star is that he's kind of like an every-man. He's not jumping off of cars, doing flips off of a moving vehicle, or possesses superhuman strength. He's a guy in his 60's. He gets tired when he runs. He gets hangovers like everyone else. He has a bad attitude, and gets repeatedly called out on it. All of those things apply to his character in here, and as a human, he's totally relatable, which makes his character and the way he goes about "everything" so convincing for the most part.

Murphy's Law is a solid and thoroughly entertaining piece of 80's cinema. Directed with gusto by Thompson, produced by the great Cannon Group, and starring an aging Charles Bronson who nails the part of a tired, grumpy, and resourceful cop in this action thriller. Here's hoping to their earlier effort 10 to Midnight is just as good.
Posted by robotGEEK at 1:23 PM