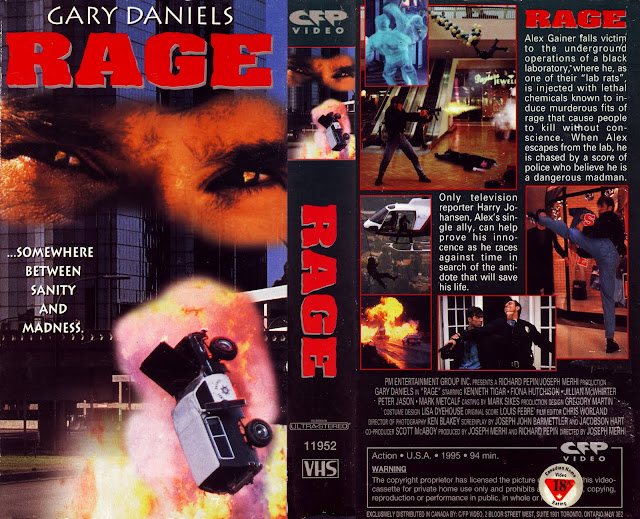 It might be shocking to most to learn that I've only now been immersing myself in PM Entertainment flicks. I know, I know. I'm entirely late to the game on this, and I have no excuse really. But you know, better late than never right? It all started for me about a year ago when someone mentioned Hologram Man to me. I think for me it was just the insanely cheesy name that struck a chord. I tracked it down, and for the entirety of it's running time, my eyeballs melted at the awesome display of no-holds-barred low-budget action at it's finest. Hologram Man really is the best of the best.

So I soon did some digging and discovered a few things. One, PM Entertainment released this. Two, Richard Pepin is a fantastic action director, and quite the prolific producer. And three, it's going to take a helluva long time digging through PM's vast catalog of low-budget actioners.

Rage is a PM Entertainment film starring Gary Daniels and directed by the ever reliable Joseph Merhi (Last Man Standing), who along with Richard Pepin, together turn out an insane number of action films both as producers and directors, most prominently in the 90's. One of the things that got me onto Rage faster than other PM title was that I had actually seen the insane trailer play on a VHS of one of Richard Pepin's films. It was so nuts I had to show that trailer to some of my friends. So this film had always been on the back of my mind, and when it came time to hunt down some old PM action, this was at the top of the list.

I'll be honest. Rage is entertaining, but didn't find it quite as enjoyable as I had hoped. A large part of that problem, for me anyway, is that I found director Joseph Merhi's handling of the material to be rushed. I mean, I know these films are all about "big, loud and fast", but it seems that so much of his camera work here is handheld-freestyle-point the camera wherever-style and there's really no pizzazz, especially when I compare it to another one of his films I just recently discovered and fell hard in love with, Last Man Standing. That film seemed better put together, and not nearly as rushed as this offering. But Rage isn't a total loss. There's plenty of action to be found, and some really insane set pieces and stuntwork, 2 things you come to expect from both Joseph Merhi and Richard Pepin. There's one sequence in particular, involving a big rig, that needs to be seen to be believed. It's nuts!

Gary Daniels does a fine job in the lead. I don't know, I like the guy. He certainly looks imposing. But there's just something about him that I just never find believable. I know it sounds weird, but I think it's his voice. Not so much the accent than it is the somewhat high pitch it carries for someone so big and badass. I think I always expect there to be maybe some kind of gruffness to it, but whenever he speaks, and his high pitched accent comes out, I'm always thrown off. Always. But you know, as a physical presence, Daniels can certainly kick a lot of ass legitimately, even if I found some of the fight scenes in here to be......amateurish, surprisingly.

If you like action, PM Entertainment, or Gary Daniels, you'll surely enjoy this. It's not bad at all. Personally I didn't quite find it on the same level of awesome as say Last Man Standing, Hologram Man or even Cyber Tracker 2, but hey, they can't all be that badass.
Posted by robotGEEK at 7:59 PM