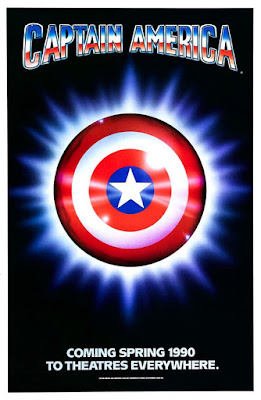 When I revisited this film years ago, I remember thinking it was laughably terrible. How naive I was then. In all seriousness, I have to admit that I think I judged it too harshly, and to this day, feel terrible about it, because I know since then that Albert Pyun himself has read that review, as well as many others I've done on his films, and I'd do anything to take some of those hurtful comments and critiques back.

Since then, I've slowly come to appreciate this camp classic, as my appreciation for this character, Albert Pyun, and this type of film in general has grown. Within this past year especially, my love for campy comic book adaptations has grown considerably, as has my love for Albert Pyun directed films. I wish I could say why I felt the need to be so harsh before, but I can't. There is no answer really. They were feelings I had at the time, and thankfully, my feelings have changed since then. But anyway, moving on. After reading many interviews, and hearing from Albert Pyun's own words in his commentary on his self-released Directors Cut, it's painfully apparent his hands were tied. So much so that we're lucky we even got what ultimately ended up on screen in the final released version. I'm not going to say I agree with every choice he made, because I don't. But for the most part, he did the best he could under rigorous circumstances, and I applaud and commend him for what he was ultimately able to pull off on such an increasingly limited budget.

In the plus department, Albert Pyun directs Captain America with gusto. While there were a few shots I would have done differently, for the most part he pulls this film off with his signature style that he's become known for. I'm glad he directed this in 1989 and not recently, where he's now become more known for his use of green-screen than filming on actual location. I miss those days. His films now have a drastically different feel, approach, and vibe altogether, and I've struggled to get excited about an Albert Pyun project since his days in the 80's and 90's when he turned out stylish films like Cyborg, Nemesis, Brainsmasher, Knights, Captain America, and Dollman to name a few. But thankfully Marvel's low-budget Cap film falls within this timeline and Pyun, as a visual filmmaker, is in top form. 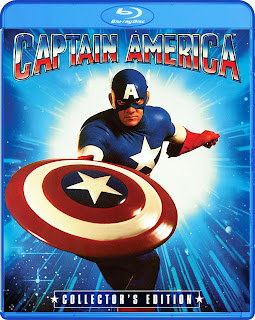 While the film is lacking in a lot of action, when there is action, it's really impressive. And that's really the most frustrating thing about this film. There are genuine moments of "awesome" and "beauty" in some of his action sequences here, but they're far too brief, and you can't help but think what kind of Captain America film we could have gotten had he been given free reign to do what he wanted. For instance, in an interview found under the Special Features on the Blu ray, he says that originally he wanted another actor to be Captain America when he transformed from a weakling with polio. In fact, he wanted football hero Howie Long to don the costume. But the studio refused. And if memory serves me, I remember in a previous interview where Pyun stated that he wanted to take the dramatic approach, and rely less on action in this version, but I could be wrong. If that's the case, then maybe the lack of action isn't entirely the studio's fault or the fact that money was drying up fast. In either case, the few action sequences we do get are outstanding. If only there was more in here. There always feels like there should be more.

Since money was virtually nonexistent, they shot most of this film in Yugoslavia, with the third act almost taking place entirely in a huge castle. It's with these locations where Captain America really shines, and makes the film look and seem bigger than it actually is. It's with the final act where Pyun really struts his stuff and gives us some excellent camerawork, utilizing his surroundings to the best of his ability.

Another thing you'll notice, like my 12 year old did, is that this film is oddly edited. One could argue that it's over-edited, if that's even a term. There are a number of action sequences where it appears a good 10 different cuts were used to comprise a shot that takes 5 seconds. Meaning, if there's a shot of Cap jumping on a ledge, it looks like either there were 5 different camera's filming this one sequence and edited together, or they shot it repeatedly, and combined all best takes. It's a little jarring at times, and almost comes off as strange, but in an odd way, adds a little bit of excitement to the action sequence.

Massive plotholes aside, if you can try to overlook the amazing number of things that just don't make sense, then you can appreciate this little slice of low-budget awesome. The costume design is great, and Albert Pyun's direction is solid. It could have used a better score and more action, but it sports an impressive cast, some solid action, and an air of camp that is sadly missing from films like this. All that is to say is that I love it. I can overlook the films less impressive aspects, and praise it for it's many positive ones.
Posted by robotGEEK at 2:30 PM