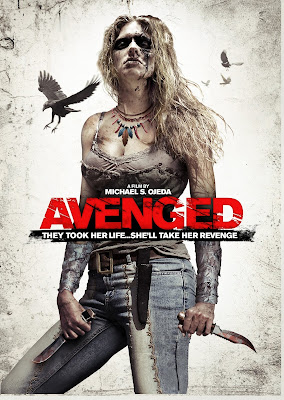 Like most low-budget independent horror films these days, I heard about this one through social media. Someone had asked if it was out on DVD, providing a picture of the poster art, and I was immediately intrigued. At that particular time, it hadn't yet been released, but I kept it in the back of my mind. Just the other day I was browsing what Redbox had to offer when I went to my local grocery store and BAM! There it was and here we are.

I have to admit that it's hard to impress me with low-budget horror. Sure I know it seems I've been raving about them as of late with recent gloating over films like It Follows, Starry Eyes and We Are Still Here, but with every great indie horror film, there are a good 20 that suck. And truthfully, we pretty much know if they're gonna suck just judging by the cover art alone, or in some cases, the title. It's a pretty safe bet that most of these will be lame or mediocre at best, but then every once in a while a film will surprise me, much like the ones I mentioned before.

During a cross country road trip to her boyfriend, Zoe, a deaf mute, is brutally raped, tortured and murdered by a gang of ruthless killers. When a Native American tries to rescue her, her body is resurrected when the spirit of an Apache warrior takes over, and she seeks out revenge on those who murdered her.

While I wouldn't put this quite up there in terms of quality, Avenged aka Savaged has so much more going for it in a completely different way that easily makes it a far better film than you're expecting going in. For starters, whether intentional or not, Avenged looks and feels like a solid Grindhouse flick. No joke. There is a rawness to everything; a distinct raw energy permeating through this film. It might just be in the way writer/director Michael S. Ojeda shoots, or it might be in the subject matter and how it's written, but either way, Avenged plays out like a revenge Grindhouse tale with all the trimmings. Now that I look back on it, I think Ojeda really missed an opportunity to push this film even further into the mainstream as Grindhouse throwbacks are becoming more and more popular these days. In any case, Avenged was a fun film, regardless of what Ojeda's intentions were.

Writer/director Michael S. Ojeda has as very distinct way of shooting this film, which is a lot of handheld shots, quick cuts, and giving the images a burnt, almost over-exposed look. Normally those are the kinds of things I frown upon, but I have to admit that in this case, it works really well. I don't think this film would have had the same feel, or impact had it been shot streamlined with some fancy visual camerawork. The freestyle frenetic energy works wonders overall in this.

One thing I would strongly recommend is checking out the Making Of feature located on this disc. It's a pretty interesting story and gives you insight into how they struggled to get financing for this, and how it really was a labor of love to make, hiring actors and a production with virtually none to minimal experience. Most of the people who worked on this did for the love of the project, and not for the money, which is refreshing to hear.

One thing that might throw some people off is that it tends to be kind of all over the place, which is part of it's appeal for me. One minute it's a serious revenge flick, but then there are times when it's a little silly and over the top, and then they throw in some supernatural elements, with so many other elements thrown in that it's so hard "not" to have a good time, especially when you see endless mediocre or just plain awful garbage in the horror genre these days. You really can't go wrong with this one. It won't blow you away or anything, but you can tell it's made with love and passion, and for a rental, you certainly can't go wrong. Top notch effects work (for the most part), strong cast, and an impressive Grindhouse vibe all contribute to a film that's ultimately much better than you expect it to be.