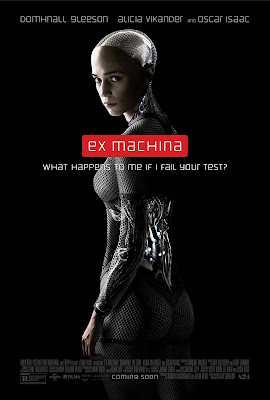 I've been a fan of Alex Garland as a writer quite some time, with films like Dredd and the criminally underrated Sunshine being some personal favorites of mine. While most associate him with being the writer who invented the 28 Days Later franchise, I think his work on Dredd and Sunshine was incredible. So when I heard that he would be making his directorial debut with Ex Machina, based off of his own script, I was excited. But you know, it takes a LOT to get me to shell out $10 for a movie these days, so more often than not, I skip the theater altogether and patiently wait for home video.

Ex Machina is one of the best science fiction films I've seen in a long while. It's bold, clever, and spins the genre on it's head for a number of reasons. I didn't know what to expect going in, but just the word of mouth alone was ridiculously good. So I went in cold, not knowing anything about the premise, the cast, or anything of that nature, other than it was Alex Garland's directorial debut.

Ex Machina is unique in the sense that it plays out more like a stage play than anything else, yet it works stunningly well. With only 3 actors in the entire film, Ex Machina really relies heavily on Garland's script and dialogue to keep things moving, and interesting. I can honestly say that he succeeds....in spades, as I was enthralled for the entirety of it's running time. There was so much about Ex Machina that I was not expecting, with it's stunning use of dialogue to propel both the story's narrative as well as pretty much everything that happens, to Garlands stunning restrained visuals, to the near flawless use of CGI. 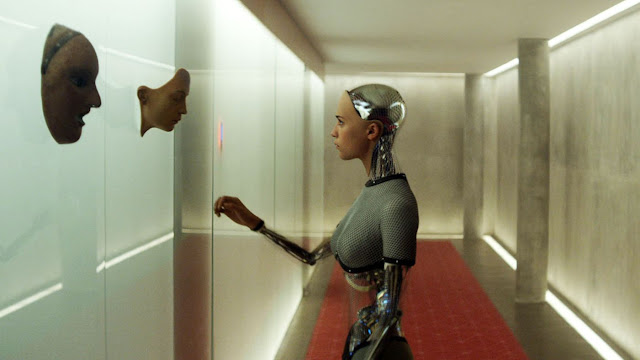 With only 3 characters to connect with the entire time, and very little in the way of action or excitement, you better make sure the script is sharp and engaging enough to keep the viewer invested for an hour and a half. Alex Garland does just that, giving us one of the most smartly written screenplay's I've had the pleasure to come across. It's witty, thought-provoking, and engaging, while also keeping you guessing. Garland plays with different emotional themes, often reversing roles to keep you on your toes, and constantly questioning the sincerity of anything any of the characters say. Those are all the marks of an outstanding script.

Oscar Isaac, nearly unrecognizable, is ridiculously good here. You never know what to make of him, oftentimes coming off as genuine and charming, while other times creepy, cocky, and arrogant. He makes you nervous, unable to fully read him and figure him out. Isaac plays him with gusto, delivering an unsettling performance that's easily one of the films major highlights, thus making Alex Garland's personal little film far beyond what you come to expect in a film like this.

I honestly can't praise this film enough. Ex Machina is easily one of the best and most impressive films I've seen this year for a number of reasons - the performances, the script, the amazing eye candy, the intensity, the tone - all of it works splendidly.

Ex Machina is currently available to rent or purchase from any number of retailers, including Redbox and Amazon.
Posted by robotGEEK at 11:31 AM